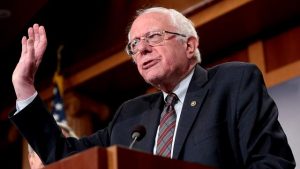 Sanders’ campaign made the announcement Monday.

The 76-year-old Sanders plans to launch his campaign next month with a series of rallies across Vermont.

In a statement issued by his campaign, Sanders, who is among the list of possible contenders for the Democratic presidential nomination in 2020, says it has been an honor to serve the people of Vermont, but more remains to be done.

He says the 2018 midterm election will be a pivotal moment in U.S. history and people must fight for an agenda that works for working people.