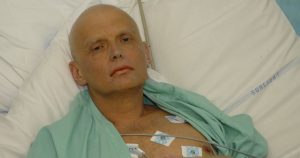 MOSCOW — Russian state TV has interviewed a woman it claims to be the mother of a former Russian spy poisoned in Britain.

Sergei Skripal was discharged from a British hospital last week more than two months after he was poisoned with a nerve agent. His daughter, who was also poisoned, was discharged last month.

The Skripals have been taken to an undisclosed location and have not been seen in public.

Russia’s Channel One on Monday showed an interview with the woman it said was Sergei Skripal’s mother. The woman said she has not talked to her son since he was hospitalized and appealed for British authorities to allow Skripal to give her a call.

“I haven’t seen my son in 14 years. I want to meet him, I want to hold him tight close to my heart,” the woman said in the interview, wiping away tears. “I’m 90, and I don’t pose a danger to anyone.”

Skripal’s mother has not spoken in public before, and the British authorities have never mentioned her. The Russian embassy last month mentioned that Skripal’s cousin takes care of his elderly mother.

Skripal is a former Russian intelligence officer who was arrested in 2004 and convicted of spying for Britain before coming to the U.K. as part of a 2010 prisoner swap. He had been living quietly in the English city of Salisbury, 90 miles (145 kilometers) southwest of London, when he was poisoned.

The woman purported to be Skripal’s mother said she used to talk to her son every week on the phone. She appealed for the British authorities to let her speak to her son and to allow Skripal’s cousin Viktoria, who was previously denied a UK visa, to visit him in Britain.

This story has been corrected to say the Russian embassy has mentioned Skripal’s mother before.