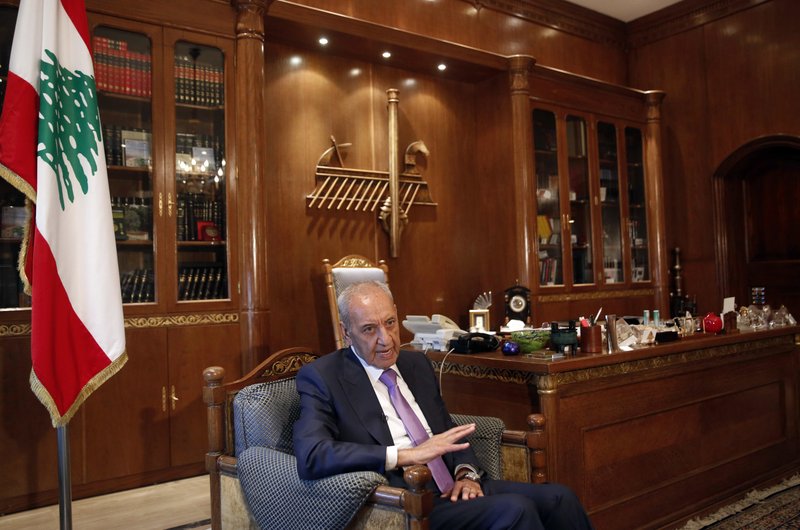 BEIRUT — Lebanon’s longtime parliament speaker Nabih Berri often seems like a veteran schoolteacher with a class of unruly students, using threats and jokes and occasional gavel-pounding to keep the assembly in order.

The 80-year-old has held the job for a quarter-century, and is set to be re-elected as speaker for a sixth time on Wednesday, when the new assembly convenes after national elections earlier this month — the first in nine years.

That he faces no challengers, and rarely has over the years, owes much to Lebanon’s sectarian-based and elite-dominated political system, which has mostly kept the peace since the 1975-1990 civil war, but has also spawned political paralysis and endemic corruption.

Berri is seen by some as an embodiment of that system, which shows no signs of changing despite rising discontent. But the parliament speaker, who is one of Lebanon’s most influential and enduring politicians, is also seen as a moderate, unifying figure who lifted his Shiite community’s profile and role in the country’s postwar politics, often acting as mediator among feuding Lebanese factions.

“I don’t believe that there is anyone else who has the characteristics, shrewdness and skills to be parliament speaker more than he does,” said Fouad Saniora, a former prime minister from a rival bloc who had tense relations with Berri during his term.

Lebanon’s political system, built to distribute power among its various sects, mandates a Christian president, a Sunni Muslim prime minister and a Shiite parliament speaker, while the Cabinet and parliament seats are equally divided between Muslims and Christians. As leader of the Shiite Amal movement, which is closely allied with the Shiite militant group Hezbollah, Berri is virtually untouchable. The two parties hold all but one of the 27 seats allotted to Shiites in parliament.

“This is the reality in Lebanon,” said Nabil Bou Monsef, deputy editor-in-chief of the leading daily An-Nahar. “As long as he is the man chosen by his sect to head the parliament, no other sect will veto him as this will lead to sectarian conflict. … These are the rules of the game.”

Berri’s rise is unusual because he does not come from an established political dynasty. He was born in the African nation of Sierra Leone on Jan. 28, 1938 to a Lebanese trading family with origins in the south Lebanon town of Tibnin. He worked his way up, eventually becoming a lawyer, and says he ended four centuries of feudalism in southern Lebanon.

He was a follower of Imam Moussa al-Sadr, a charismatic Iranian-born cleric who led a Shiite revival in the 1960s that mobilized the long-marginalized community. Berri rose to prominence in 1976, when he became an active member of the politburo of Amal, the military wing of al-Sadr’s movement.

“I was influenced by Imam Moussa al-Sadr in every aspect,” Berri told The Associated Press in a recent interview in his office, which is decorated with an icon of the Virgin Mary and a picture of Berri meeting the late Pope John Paul II.

Amal fighters battled Israeli troops when they invaded Lebanon in 1982, but failed to prevent them from reaching the capital, Beirut. The Shiite fighters later resorted to insurgent attacks, and along with Hezbollah took credit for the Israeli withdrawal in 2000. To this day, Berri says his greatest political achievement was setting up the “resistance.”

Amal struggled during Lebanon’s civil war, however, especially after Iran set up Hezbollah in the early 1980s, drawing Amal defectors into its ranks. The two Shiite groups fought each other on several occasions during the war, but eventually mended ties, and today form the backbone of a Lebanese coalition allied with Syria and Iran.

“When it comes to resistance (against Israel) and goals and everything, we are one body,” Berri said about his ties with Hezbollah. “It is not a Shiite thing. This is a national coalition.”

Berri became known in the West in June 1985, when he helped mediate the release of 39 American hostages after 17 days in captivity. They were held by Shiite extremists who had hijacked a TWA Boeing 727, killed a passenger — U.S. Navy diver Robert Stethem — and demanded the release of 700 Arabs held by Israel.

In the years after the civil war, Berri emerged as a canny mediator who maintained friendly ties with the country’s various factions and worked to prevent them from relapsing into civil war. Known to his supporters as the “Istez,” a title reserved for lawyers, Berri plays an outsized role in naming presidents, forming governments and passing legislation, and his Beirut residence is invariably on the itinerary of visiting foreign dignitaries.

But he is also seen as part of a narrow political elite that has been unable to provide basic services. Nearly 30 years after the civil war ended, Beirut still experiences routine power outages, and a dispute over trash collection in recent years sparked mass protests, organized with the hashtag #YouStink drive, directed against the political class.

Critics accuse Berri of holding up the legislative process when it suits his needs, and his supporters have taken to the streets in violent protests when other factions have challenged him. Earlier this year they blocked Beirut streets with burning tires and trash bins after a leaked video showed the foreign minister calling Berri a “thug” in a closed meeting.

Berri, who has nine children and 26 grandchildren, insists he won’t follow the local tradition of keeping his job in the family, but the octogenarian also has no plans to step down.

“There is no retirement in politics,” he said. “As long as you serve your people and you can work, you will work.”