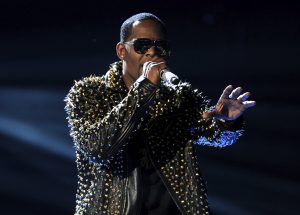 NEW YORK — Singer R. Kelly sexually abused a woman, locked her in rooms and vehicles for punishment, and infected her with herpes, the woman said in a lawsuit filed in New York.

Faith Rodgers said in the suit filed Monday that she met Kelly about a year ago after a concert in San Antonio, Texas. The 20-year-old says that Kelly “mentally, sexually and verbally” abused her during their relationship.

Rodgers said in an appearance Tuesday on “CBS This Morning” that Kelly instructed her to call him “daddy” and told her his goal was to teach her how to have sex like a “mature woman.”

Kelly’s management team declined to comment Tuesday, but they previously denied Rodgers’ claims when she filed a police report in Dallas.

A series of women have come forward to allege misconduct by Kelly over recent years, accusing him of everything from sexual coercion to physical abuse.

That includes parents who said their daughter was being held by Kelly as part of a sex cult, and a woman who said she was in a long-term abusive relationship with him. Kelly and the girl whose parents came forward denied the allegations against him.

“Unfortunately, the facts and background of this case are not unique,” said Rodgers’ lawsuit. “This is a run-of-the-mill R. Kelly sexual abuse case. For over 20 years, women across America have been victimized by defendant, R. Kelly, and have filed eerily similar claims.”

Kelly is one of pop music’s best-selling artists, with hits including “Ignition,” ”I Believe I Can Fly,” and “Bump N’ Grind.”

The Time’s Up campaign took aim at him last month and urged further investigation into the singer’s behavior, which has come under closer scrutiny over the last year in wake of the #MeToo movement.

Earlier this month, Spotify, citing its new policy on hate content and hateful conduct, removed the R&B singer’s music from its promoted playlists and algorithms following a campaign from #MuteRKelly and others to sanction him.

An appearance at a concert in his native Chicago scheduled earlier this month was canceled after protests.

Rodgers said that Kelly flew her to New York to attend a show and that she “submitted” to sex when he visited her hotel room.

“I didn’t really say anything. I kinda just froze up,” she said. “I definitely was uncomfortable. But he has this type of, like, intimidation right off the bat. You know? So I was just waiting for it to be over.”

Rodgers said situations like that occurred “multiple times” and the lawsuit says that Kelly disregarded her when she said she was “not ready to have sex” with him.

The Associated Press does not typically identify people who say they are victims of sexual assault unless they decide to make their names public, which Rodgers has done.

Kelly has won multiple Grammys, sold close to 30 million albums and has written hits for Michael Jackson, Celine Dion, Aaliyah and more. He has crafted pop anthems and love songs but he is defined by sexually explicit songs such as “Feelin’ on Yo Booty,” ”Your Body’s Calling Me,” ”Sex Me” and even more explicit fare.

He has long been accused of behavior that has ranged from questionable to criminal. He wed a 15-year-old protege, the late R&B star Aaliyah, in 1994. The marriage was later annulled and the two refused to confirm that it even happened.

He was later accused of child pornography after a widely circulated videotape appeared to show him having sex with, and urinating on, a teenage girl. He was acquitted of all charges in 2008 and continued to rack up hits and sell out stadiums around the country.