‘Roseanne’ ends season with a hopeful note as storms brew 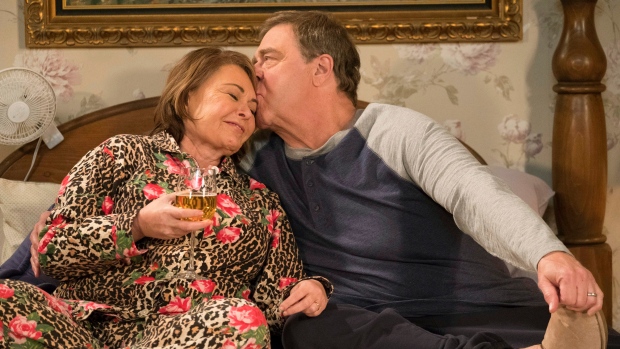 NEW YORK — The reboot of “Roseanne” ended the season Tuesday with a flood, a feast and a prayer. It was a hopeful climax to a show that’s been popular and yet also divisive.

Roseanne Barr, who plays the titular character on the hit ABC show, plans to go to the hospital for knee surgery when her family surprises her with a goodbye meal that includes ham, cake and casserole. Outside a storm is raging.

The flooded community has been declared part of a presidential state of emergency. So Roseanne’s husband is suddenly flush with construction work and the family can pay for her surgery. “I hope to see my husband’s face and not yours,” she prays to God. “No offense.”

“It’s about rain and health care and God,” Barr told The Associated Press on the eve of the finale’s airing. “We’re wrapping up the season in a great way that kind of gives the idea that government can really help people. That’s something that I wanted to end on.”

Barr said she was thrilled that so many people have tuned in every week and that many of the hot-button issues that were raised in the reboot will continue in the coming season.

“The show did great. Scrutiny is always good — it’s part of being successful,” she said. “It gives everyone something to talk about. And everyone gets to express their opinion, too.”

Politics made an immediate impact in the first episode, when it was clear that Roseanne Conner embraced President Donald Trump, while her sister, Jackie, was a staunch opponent. In the series finale, the show mocks Trump for his inability to spell “Illinois” in a tweet.

The Trump factor earned the show a wealth of media and other attention, including from the president himself. He called to congratulate Barr on the show’s 18 million-plus debut audience and in a speech said the show “was about us.”

“We want to be brave. We want to tackle things that other shows are worried they can’t either make funny or will make people uncomfortable,” said executive producer Bruce Helford, who also worked on the original series, which ran from 1988-97.

The reboot also has prompted some outrage, including a joke about two other TV shows featuring minority characters that was deemed dismissive, and an episode some people called Islamophobic.

Sara Gilbert, who has returned to play Roseanne’s daughter, Darlene, and is also an executive producer, said the negative criticism illustrates a fractured media landscape.

“When you get big numbers, you kind of have to expect some kind of extra scrutiny. And because of the way the internet works, and the clicks on news articles, the most negative stories get the most pickup,” she said.

“Overall, I’m so grateful that people are watching and supporting us,” she added. “Overall, I think the experience has been very positive.”

The show’s writers regroup May 29 to start working on the next season, which will have 13 episodes. Whitney Cummings, who had been co-show runner with Helford, will not return, but comedians Wanda Sykes and Norm Macdonald are back.

New to the staff will be comedian Ali Liebegott (“Transparent”), Emily Wilson (“AP Bio”), Ted Jessup (“Family Guy”) and comedian Jena Friedman, who has written for “The Daily Show with Jon Stewart.”

“We have a lot of new voices, younger voices, which I think is important on the show,” Helford said. “We run a democratic room, almost nobody has a stronger voice than anybody else; everybody’s input is there.”

Barr stressed that an unusual number of female writers were being added. “We have all points of view in our writers’ room. It’s kind of like conducting an orchestra of opinion. I like it. That’s what I do best,” she said.

Gilbert said she wants the new season to focus on the characters’ “emotional lives,” including Roseanne’s addiction and her own character’s romantic life. But both Gilbert and Barr said the show would not shy away from tough issues.

“I think we want to talk about the same struggles that we believe working-class Americans have, so we’re always going to address those. That’s inherently political on some level. That doesn’t mean we’re going to be talking about any particular candidate’s policies. But we’ve never done that,” Gilbert said.

Barr agreed, saying that she and the writers are not finished discussing the big issues that were raised on the show this year. None have been wrapped up and put to the side.

“We tried to hit all the big ones that never make it to TV. And we’re going to continue to do that. Everything that we laid out in this season gives you a clue of where we’ll be going in the next one.”

Mark Kennedy is at http://twitter.com/KennedyTwits