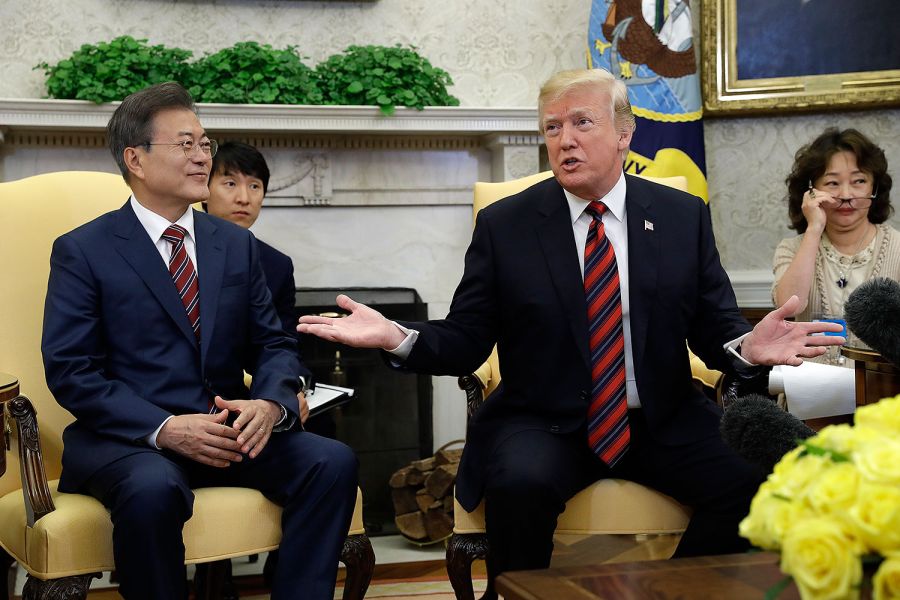 WASHINGTON — The United States and South Korea are laboring to keep the highly anticipated U.S. summit with North Korea on track, even after President Donald Trump abruptly said “there’s a very substantial chance” it won’t happen as scheduled.

South Korean President Moon Jae-in reminded Trump Tuesday of the sky-high stakes, saying, “The fate and the future of the Korean Peninsula hinge” on the meeting.

The June 12 summit, planned for Singapore, offers a historic chance for peace on the peninsula — but also the risk of an epic diplomatic failure that would allow the North to revive and advance its nuclear weapons program.

Trump’s newfound hesitation appeared to reflect recent setbacks in efforts to bring about reconciliation between the two Koreas, as well as concern whether the self-proclaimed dealmaker can deliver a nuclear accord with the North’s Kim Jong Un.

Seated in the Oval Office with Moon Jae-in Tuesday, Trump said Kim had not met unspecified “conditions” for the summit. However, the president also said he believed Kim was “serious” about negotiations, and Moon expressed “every confidence” in Trump’s ability to hold the summit and bring about peace.

President Donald Trump says the planned Singapore summit with North Korea&squot;s Kim Jong Un “may not work out,” and the president suggested it could be delayed. (May 22)

President Donald Trump says the planned Singapore summit with North Korea’s Kim Jong Un “may not work out,” and the president suggested it could be delayed. (May 22)

“I have no doubt that you will be able to … accomplish a historic feat that no one had been able to achieve in the decades past,” Moon said.

U.S. officials said preparations for the summit were still underway despite recent pessimism — and privately suggested there would be additional public maneuvering as both sides seek to maximize their leverage. Both parties to the talks are invested in holding the meeting, with Kim seeing an opportunity for international legitimacy and Trump the prospect of securing Korean stability — and perhaps a Nobel Peace Prize.

Trump suggested the summit could be delayed rather than canceled: “It may not work out for June 12, but there is a good chance that we’ll have the meeting.”

He did not detail the conditions he had laid out for Kim but said if they aren’t met, “we won’t have the meeting.” Press Secretary Sarah Sanders said Trump was referring to a commitment to seriously discuss denuclearization.

Skepticism about the North’s intentions have mounted in recent weeks after Kim’s government pulled out of planned peace talks with the South last week, objecting to long-scheduled joint military exercises between U.S. and South Korean forces. The North also threatened to abandon the planned Trump-Kim meeting over U.S. insistence on rapidly denuclearizing the peninsula, issuing a harshly worded statement that the White House dismissed as a negotiating ploy.

Trump expressed suspicion that the North’s recent aggressive barbs were influenced by Kim’s unannounced trip to China two weeks ago — his second in as many months. Trump said he’d noticed “a little change” in Kim’s attitude after the trip.

The president added that he hoped Chinese President Xi Jinping was actually committed to the goal of denuclearizing the Korean peninsula, calling him a “world-class poker player.” Trump said he was displeased by China’s softening of border enforcement measures against North Korea.

Trump encouraged Kim to focus on the opportunities offered by the meeting and to make a deal to abandon his nuclear program, pledging not only to guarantee Kim’s personal security but also predicting an economic revitalization for the North.

“I will guarantee his safety, yes,” Trump said, noting that promise was conditioned on an agreement to complete, verifiable and irreversible denuclearization. Trump said if such an agreement is reached, China, Japan and South Korea would invest large sums to “make North Korea great.”