After the floods, locals ask ‘should I stay or should I go?’ 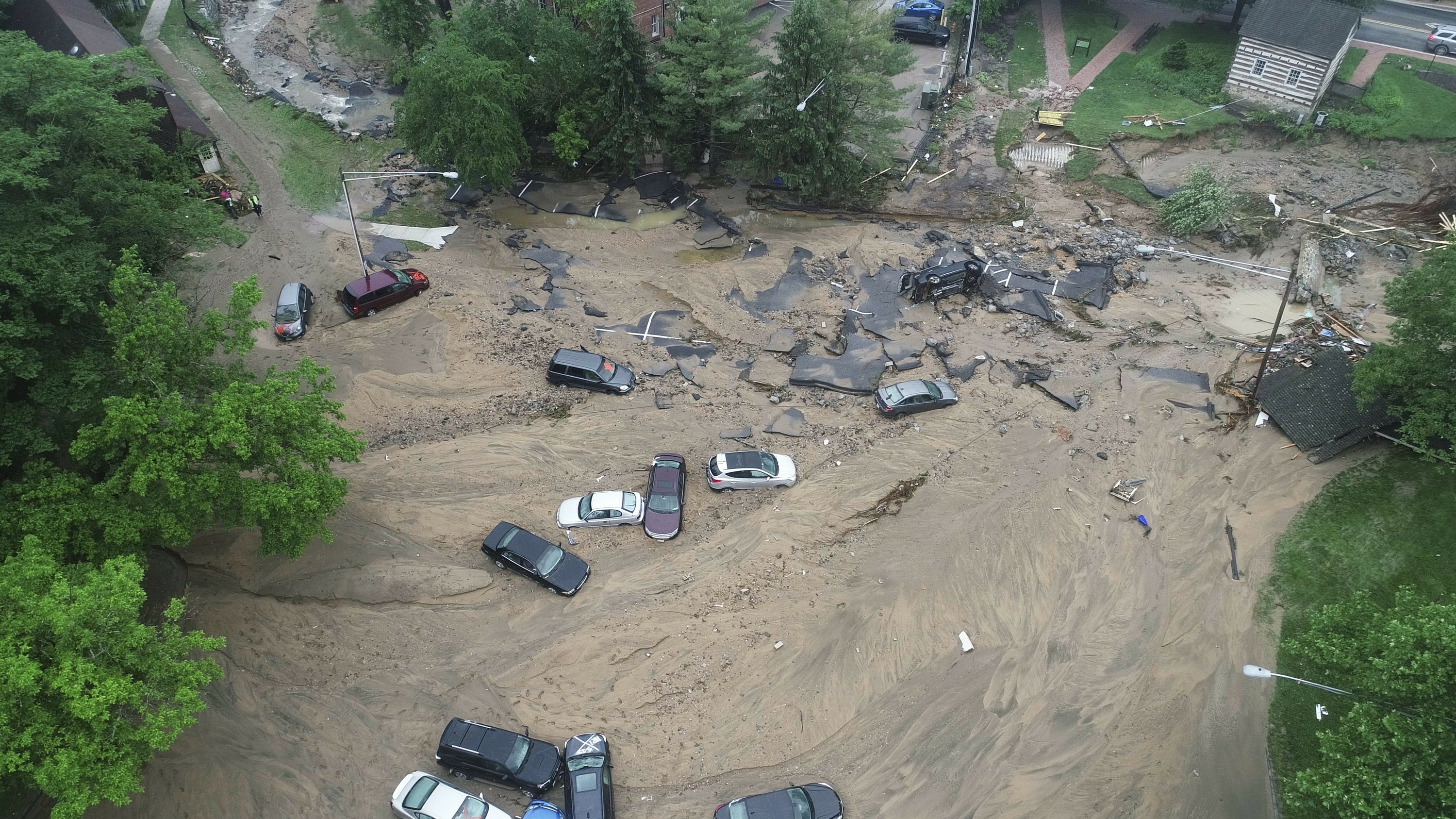 ELLICOTT CITY, Md. — After yet another devastating flash flood ripped apart their historic Maryland mill town, hundreds of residents and business owners are again asking themselves: Should I stay or should I go?

Some business owners in picturesque Ellicott City — established in 1772 as a mill town along the Patapsco River surround by hills — say they’re determined to rebuild after Sunday’s devastation. Their hope: to pull together as a community again after the second terrible flood deluged their downtown in less than two years.

Simon Cortes, owner of La Palapa Grill & Cantina, said Monday it’s “a horrible time,” and his business took on about a foot (30 centimeters) of water. But he emphasized that the old mill town has been through it all before and he’s resolved to do his part to spur another revival.

“I feel like it’s our duty to make sure that we rebuild and open back up,” said Cortes, whose restaurant is right by the spot where a 39-year-old man was swept away by Sunday’s raging floodwaters.

But with floodwaters receded, revealing devastating damage across the downtown of quaint shops and historic 18th and 19th Century buildings, others are stretched to the breaking point. Now they face yet another massive cleanup, serious economic losses and a daunting comeback. 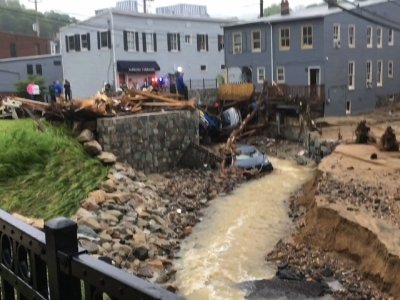 One man remained missing after flash flooding tore down historic Ellicott City, Maryland. Authorities say the community is heartbroken at seeing severe damage less than two years after another devastating flood, but remains resilient. (May 28)

It’s particularly trying for folks because Sunday’s torrential rains came just as it seemed the town had come back stronger than ever from a dreadful July 2016 flash flood that killed two. Sunday’s dramatic flooding tore up streets and swept away dozens of parked cars in the city, which sits in a ravine on the west bank of the Patapsco, about 13 miles (20 kilometers) west of Baltimore.

Getting flood insurance around old Ellicott City was a pricy proposition before. Now, those who are pondering the next comeback don’t even want to think about how much it might cost. And many business owners are still paying off the debt they incurred after the last flood smashed their businesses and properties.

Local resident Nathan Sowers, owner of the River House Pizza Co., an outdoor eatery in the old mill town’s business district, said that after all the hard work rebuilding from the destructive 2016 flood he’s feeling a bit overwhelmed at attempting yet another comeback.

“We’ll see. It takes a lot of money and a lot of time, a lot of energy. We’ll just have to assess it,” he said, speaking near a bridge where several crushed cars were swept into a muddy tributary’s banks.

But Sowers also said he saw other hard-hit locals laughing and joking about their troubles first thing Monday morning — a good sign the Maryland town will launch yet another rebirth.

Still, the one man remains missing, and this Maryland town is heartbroken.

The missing man — 39-year-old Eddison Hermond of Severn, Maryland — was last seen trying to help a woman rescue her cat behind a restaurant while seething brown waters surged through the downtown.

Howard County Police Chief Gary Gardner said the missing National Guard member and U.S. Air Force veteran had been with a group at the La Palapa Grill & Cantina when a woman approached, desperately trying to rescue her pet just outside. “He, along with some other folks, went back to assist her and unfortunately during that effort they saw him go under water,” Gardner told reporters.

“If you look at the devastation and the damage, I would certainly say it’s worse than 2016,” Kittleman said. “We’ve had areas that were not even damaged at all two years ago terribly damaged this time.”

Ellicott City certainly got the worst of it. But torrential rains led to such bad flooding in Baltimore County, Baltimore City and the capital of Annapolis that Gov. Larry Hogan declared a statewide emergency to better coordinate support and assistance.

Mike Muccilli, a meteorologist with the National Weather Service, said it was too early to make comparisons between the two devastating floods.

“In a normal heavy rain … you wouldn’t see this amount of flooding, where you see cars floating down the road,” the meteorologist said. “This was a true flash flood.”