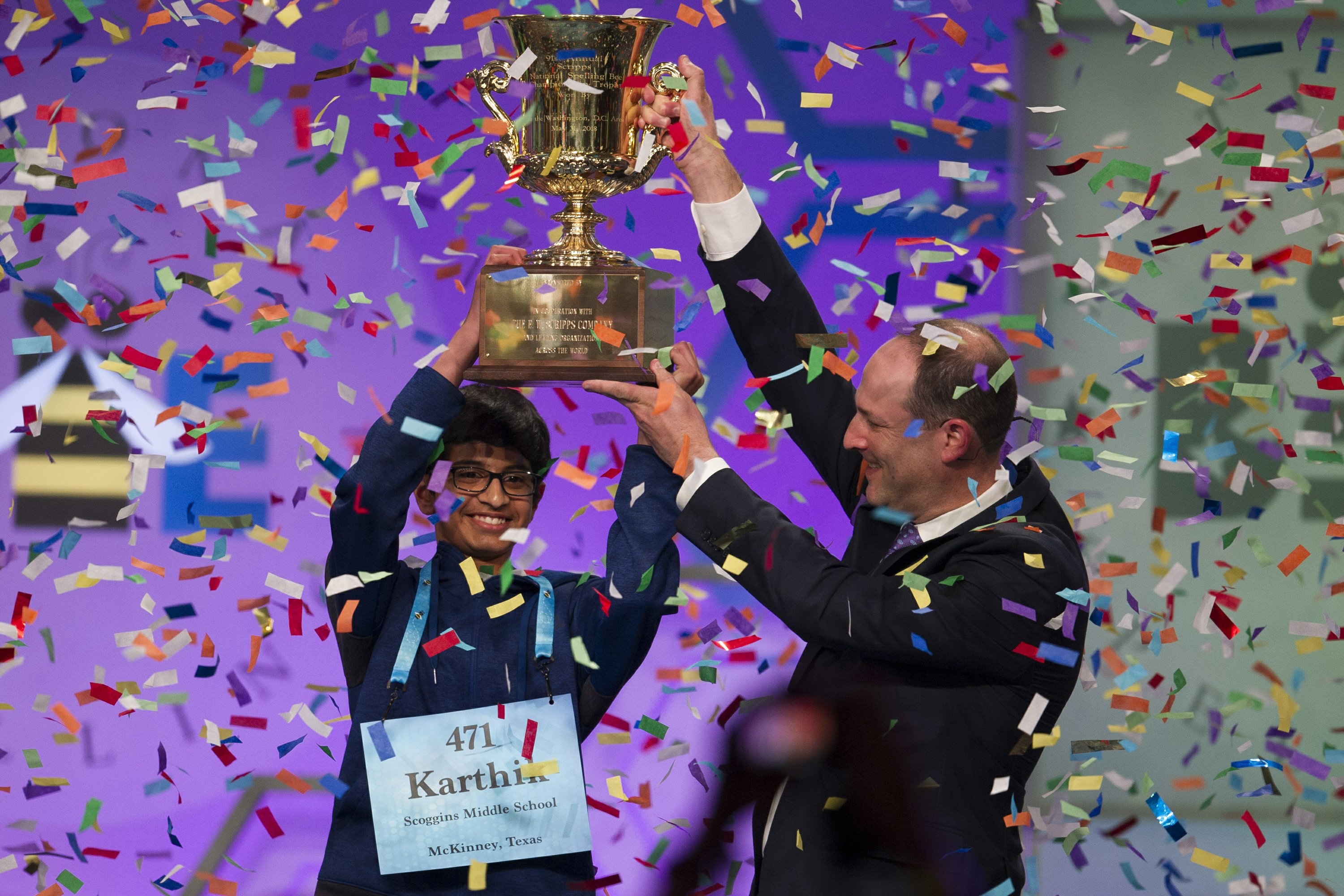 OXON HILL, Md. — The end of the biggest Scripps National Spelling Bee in history came abruptly, and it wasn’t the conclusion that many expected. Naysa Modi, a poised and charismatic four-time participant whose long spelling career seemed to be building toward triumph, sat next to a newcomer whom she had already beaten this year — at the county level.

But 12-year-old Naysa blinked immediately, mixing up the single and double “s” in the German-derived word “Bewusstseinslage” — a state of consciousness or a feeling devoid of sensory components — and 14-year-old Karthik Nemmani seized an opportunity that he wouldn’t have had before this year.

“I didn’t really think I’d be able to do it,” the soft-spoken winner said. “I had confidence that I could do it, but I honestly didn’t realistically think it could happen.”

Karthik’s victory Thursday night put the spotlight back onto the story of this bee week — the new wild-card program that Scripps launched to give a chance to spellers like him, who have to compete against some of the nation’s best spellers at the local level. The field was expanded to 515 spellers to accommodate the wild cards — there had never been more than 300 competitors previously — and four of the 16 prime-time finalists got in through the new program, known as “RSVBee.” 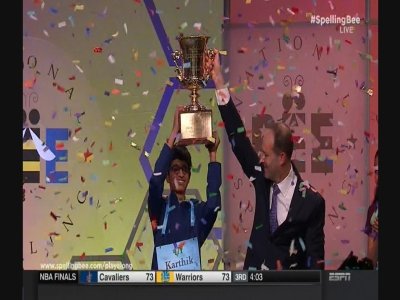 When only three spellers remained, all were from the Dallas area, which has long been a hotbed of spelling talent.

Karthik is from McKinney, Texas — his family moved there specifically so he could go to a school that takes part in the Scripps program. Naysa is from Frisco, less than 15 miles to the west. And third-place finisher Abhijay Kodali lives in Flower Mound, another 40 miles west.

Naysa knocked off Abhijay in the Dallas regional bee after topping Karthik in their county bee. The region is one of a few that sponsors two spellers for a trip to nationals. The wild cards had to pay their own way — a $750 entry fee, plus the costs of travel to Washington and lodging.

Like many top spellers, Karthik was a precocious preschooler — he arranged block letters to spell “horse” at age 3 and won his first spelling bee at 4½, his dad said.

His winning word was “koinonia,” which means Christian fellowship or communion. He knew that one. He also knew the word Naysa missed. But he didn’t pretend to be infallible, saying there were about eight or nine words in the prime-time finals he didn’t know — a rare admission for a champion.

“She’s a really, really good speller. She deserved the trophy as much as I did,” Karthik said of Naysa. “I got lucky.”

Karthik is the 14th consecutive Indian-American champion, and 19 of the past 23 winners have had Indian heritage. He takes home more than $42,000 in cash and prizes.

His win was also a triumph for the burgeoning industry of spelling coaches — high-schoolers who’ve aged out of competition but share their wisdom with younger competitors, for a steep fee. He thanked his coach, 16-year-old Grace Walters, who had her own star-crossed history of never quite getting to the Scripps stage.

Karthik also used study materials compiled by two well-regarded former Scripps spellers and fellow Texans, Shobha Dasari and her younger brother, Shourav, who finished fourth last year and won nearly every other bee he competed in. Six of the 16 top finishers, including Naysa, studied the Dasaris’ hand-picked lists of more than 100,000 words.

Naysa, who does taekwondo and performs stand-up comedy, will have to regroup after a bitter defeat and try again next year. She’ll be in eighth grade, which is the final school year that spellers are eligible. She first competed in the bee as a cherubic 9-year-old.

After her defeat, she was swarmed by dozens of current and former spellers who wished her well, smiling throughout.

“She was just as graceful as she could be,” bee program manager Corrie Loeffler said.

Her close friend, Jashun Paluru of West Lafayette, Indiana, finished fourth, spelling with flair and spending most of his time in between words chatting animatedly with Naysa.

Karthik, for his part, took no pleasure in vanquishing a familiar foe.

“I wouldn’t say it was revenge,” he said. “We weren’t against each other. We were against the dictionary.”