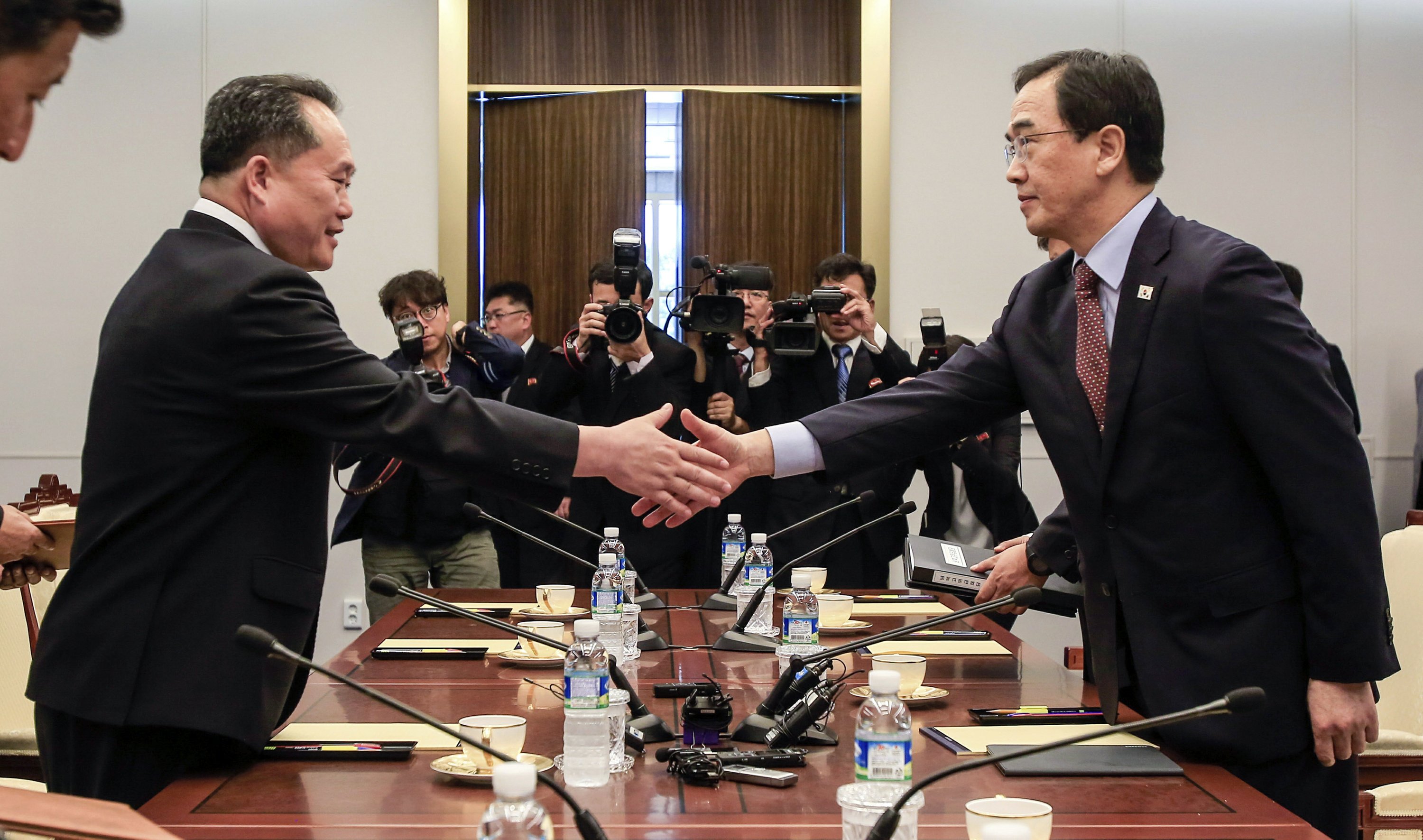 SEOUL, South Korea — North and South Korea on Friday resumed senior-level peace talks Seoul sees as an important step in building trust with Pyongyang amid a U.S.-led diplomatic push to persuade the North to give up its nuclear weapons.

The meeting at the inter-Korean border village of Panmunjom follows a meeting in New York between U.S. Secretary of State Mike Pompeo and senior North Korean envoy Kim Yong Chol where they discussed a potential summit between President Donald Trump and North Korean leader Kim Jong Un. American delegations are also meeting with North Koreans in Panmunjom and Singapore as part of efforts to confirm the summit that may take place on June 12 in Singapore.

South Korea’s Unification Ministry said the Korean senior officials during the morning session of their meeting exchanged views on setting up a liaison office in the North Korean border town of Kaesong and arranging a joint event to commemorate the “June 15 Declaration” for peace adopted after the first inter-Korean summit in 2000. The North said agreed that the liaison office should be established as quickly as possible and proposed the event celebrating the June 15 Declaration to be held in the South, the ministry said.

South Korea also proposed military talks on reducing tensions across their heavily armed border and Red Cross talks to resume reunions of families separated by the 1950-53 Korean War, the ministry said. There could also be discussions about fielding combined teams in some sports at the Asian Games in August.

South Korean President Moon Jae-in, who met with Kim Jong Un twice in the past two months, has said progress in inter-Korean reconciliation will be a crucial part of international efforts to resolve the nuclear standoff with North Korea because Pyongyang wouldn’t give up its nuclear program unless it feels its security is assured.

“We will hold discussions with the North so that we can implement the agreements between the two leaders with pace and without hitches and also create a positive atmosphere for the leaders’ summit between North Korea and the United States,” Seoul’s Unification Minister Cho Myoung-gyon told reporters before the meeting.

Ri Son Gwon, chairman of the North’s agency that deals with inter-Korean affairs, told Cho at the start of the meeting that the rivals should work on building “trust and consideration for each other” to carry out the agreements of the recent inter-Korean summits.

The talks could get contentious. North Korea in recent weeks has repeatedly criticized U.S.-South Korea military drills and is also demanding the return of 12 North Korean restaurant workers who arrived in the South in 2016. South Korea has maintained that the women settled in South Korea willingly but is now reviewing the circumstances surrounding their arrival following a media report suggesting at least some were brought to the South against their will.

After Moon and Kim met for their first summit at Panmunjom on April 27, they spoke of vague aspirations for a nuclear-free Korean Peninsula and permanent peace, which Seoul has tried to sell as a meaningful breakthrough that increases the chances of successful nuclear negotiations between Trump and Kim.

But relations chilled when North Korea canceled an inter-Korean meeting and threatened to walk away from the summit with Trump because of the South’s participation in regular military exercises with the United States and comments from U.S. officials. Trump canceled the summit, then said it may still take place, shortly before Kim and Moon met again and agreed to resume high-level talks between their countries.

Talking to South Korean reporters ahead of Friday’s meeting, Ri seemed irritated when asked whether North Korea sees its grievances as resolved, saying reporters must ask questions that “meet the demand of changing times.” When asked about the potential Trump-Kim meeting, Ri replied: “Go fly to Singapore to ask that question. This is Panmunjom.”