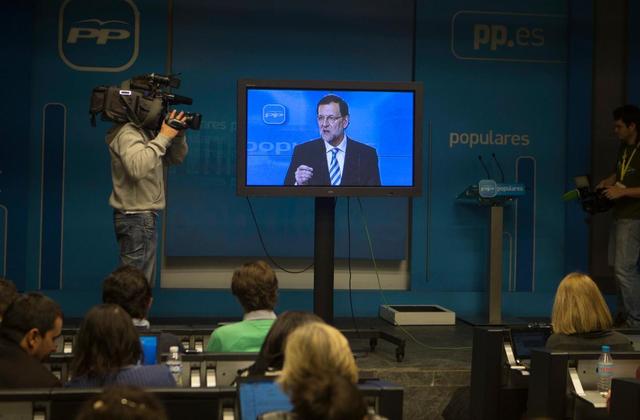 Ciudadanos leader Albert Rivera said the change of government “is not good news for Spain.”

Referring to Mariano Rajoy’s outgoing government, Rivera told reporters on Friday that “we had to censure this government, but not in this way.”

Sanchez won the support of Basque and Catalan nationalist parties to oust Rajoy in a parliamentary vote. Rivera said his party would be “very attentive to the concessions” that are made.

Opposition Socialist leader Pedro Sanchez has won a vote to replace Mariano Rajoy as prime minister, in the first ouster of a serving Spanish leader by parliament in four decades of democracy.

Sanchez won the no-confidence vote with 180 votes, a slim majority in the 350-seat lower house. There were 169 no votes and one lawmaker abstained.

The 46 year-old Sanchez is now the prime minister in waiting. Spain’s King Felipe VI still has to swear him in.

Following the vote, Rajoy went over to Sanchez in the chamber and shook the incoming leader’s hand.

Mariano Rajoy has told the Spanish parliament that he is proud of his record as prime minister in brief remarks ahead of a no-confidence vote that appears set to give the power to the opposition Socialists.

Rajoy told lawmakers on Friday: “It has been a honor to leave Spain better than I found it. Thank you to all Spaniards and good luck.”

Backed by a narrow majority in the 350-seat lower house, Socialist leader Pedro Sanchez appears set to become prime minister-designate. The final vote has been called for 0900 GMT.

Socialist opposition leader Pedro Sanchez is on the brink of ending Mariano Rajoy’s more than six-year reign as Spanish prime minister in what would be the first ouster of a serving leader by parliament in four decades of democracy.

Barring last-minute surprises, a no-confidence vote that would oust Rajoy and make Sanchez prime minister-designate is expected to pass by a narrow majority in parliament’s 350-seat lower house.

The prime minister wasn’t in the Congress of Deputies on Friday morning when the debate resumed on the motion ahead of a final vote. He didn’t attend Thursday afternoon either, going instead to a central Madrid restaurant with some members of his cabinet.