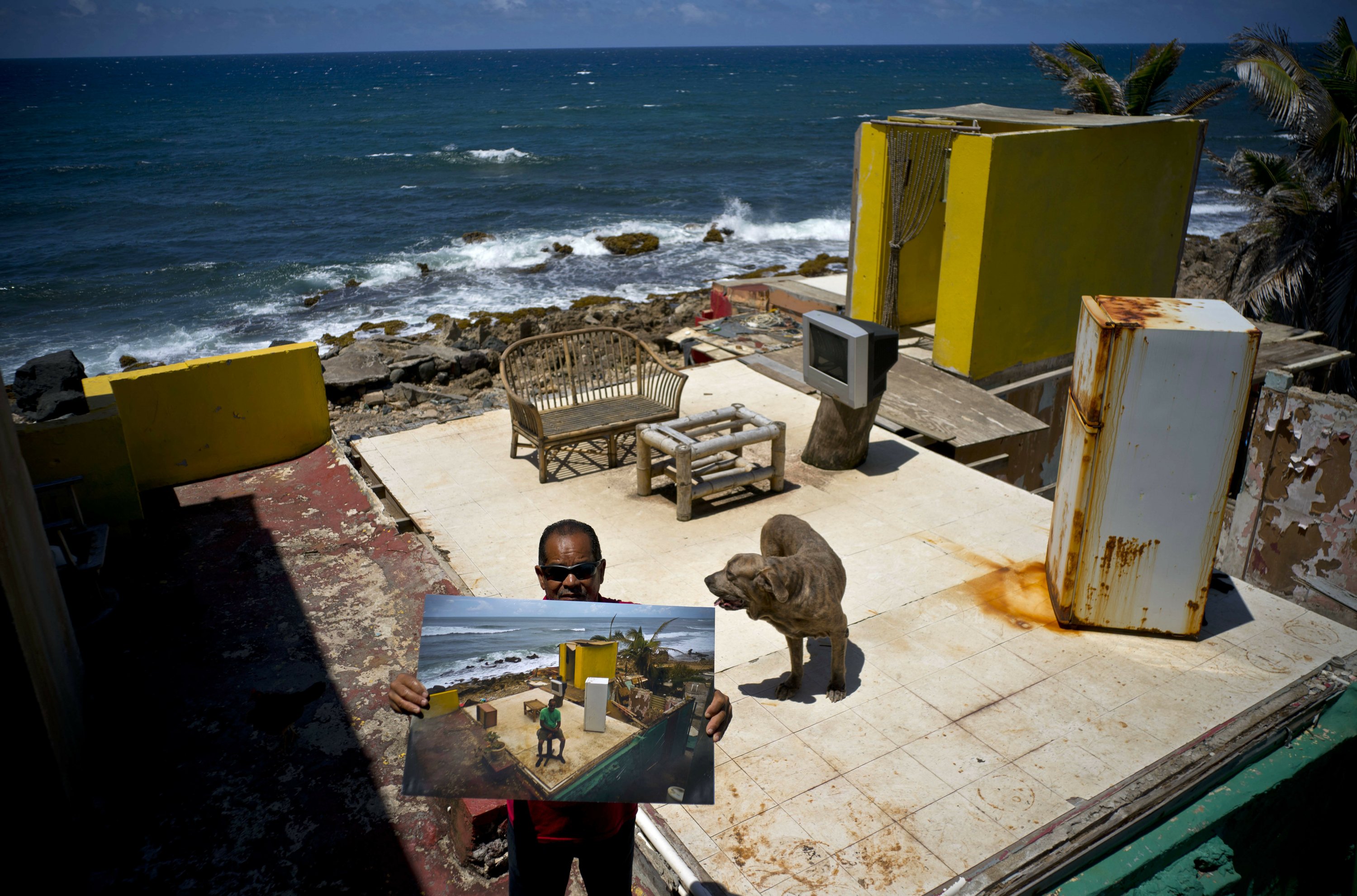 He documented the lives of Puerto Ricans who lost roofs and possessions in the storm. Others saw their houses torn completely from their foundations, leaving only concrete bases.

Espinosa revisited the subjects of his pictures ahead of the June 1 start of the 2018 hurricane season to see how they were living eight months after the disaster.

He found some well along the path to recovery — erecting concrete homes after wood houses were swept off by Maria’s winds.

Others are half-recovered: A 69-year-old woman living on federal assistance has new walls but a fragile metal roof that is screwed on to wood planks and certain to fly away in the next major storm.

Others lost everything and have no recovery in sight, including a couple who sold the car where they were sleeping after the storm so they could outfit a narrow sleeping space behind a parent’s damaged home in Puerto Rico’s central mountains.

Across Puerto Rico, tens of thousands of homes still don’t have roofs. FEMA distributed 59,000 enormous plastic sheets to homeowners who lost their roofs in Irma or Maria. More than 100,000 more received smaller tarps to protect specific rooms or belongings. Only 21,000 households have received federal aid to carry out permanent repairs.

FEMA officials say that longstanding rules prevented federal officials from granting reconstruction aid to storm victims who don’t have title to homes. In many such cases, storm victims were informally given property by a relative or inherited without a will or deed.

Officials say those rules are being loosened so victims can prove ownership with proof such as a long history of paying utility bills.

Maria completely destroyed Roberto Figueroa Caballero’s home and dozens of others in La Perla, a seaside neighborhood of San Juan made famous by the Luis Fonsi hit “Despacito.” Figueroa works in a pizzeria, lives in a rented apartment and hopes to rebuild his home, but says the Federal Emergency Management Agency rejected his application for construction aid twice, saying he does not qualify. Figueroa is appealing.

La Perla is a shantytown of about 350 people built more than a century ago on a narrow strip of Atlantic shoreline between the crashing waves and the towering walls of Old San Juan. For years the neighborhood had a dark reputation fueled by a self-described hit man turned federal witness saying the bodies of many people killed in La Perla were tossed into the sea so sharks would eat them.

Then came “Despacito.” Puerto Rican singers Fonsi and Daddy Yankee chose the slum as a backdrop for their video, which YouTube said attracted a record 3 billion views, and tourists began to pour in.

That slowed dramatically after the storm and is only just beginning to recover.

When Maria hit, Arden Dragoni was living with his wife Sindy, three children and dog Max in the town of Toa Baja. Today, Dragoni is hunting for work and has separated from his wife, who is living with their children in a FEMA-subsidized apartment.

“The hurricane brought us many calamities but I learned to value my family from my heart,” Dragoni says.

Juana Sostre Vazquez saw her wooden home off its foundation in the central mountain highlands. Living on food stamps and Social Security payments, the 69-year-old grandmother rebuilt with the help of her son-in-law and $14,000 in FEMA reconstruction aid. She said her metal roof is nailed onto wooden two-by-fours because she couldn’t afford to build stronger hopes the next hurricane won’t send it flying.

“The money didn’t let us do the roof,” she said. “I’m doing it little by little as I save a couple of dollars.”

William Fontan Quintero and his wife Yadira Sostre saw their home destroyed when Maria passed over the San Lorenzo neighborhood in the town of Morovis. The couple says FEMA rejected their application for financial help but they received $8,000 from family to replace their belongings, which they invested in wood to build a small home where they live with their two college-age children. The roof is a plastic tarp while they wait for their application to FEMA to be approved so they can finish rebuilding.

“We don’t have time to build anything safe without help,” Quintero said.

Luis Cosme, a worker at a cleaning company, felt the high winds as Maria neared and ran to the shelter at the Catholic church building. In the morning he came out and saw his house gone.

Blanca Rivera and Eduard Rodriguez slept in their car after Maria destroyed their home in San Lorenzo. The couple says FEMA rejected their request for financial help to rebuild, so they sold their car to build a room next to his mother’s house.