Capitals flying high, up 2-1 on Vegas in Stanley Cup Final 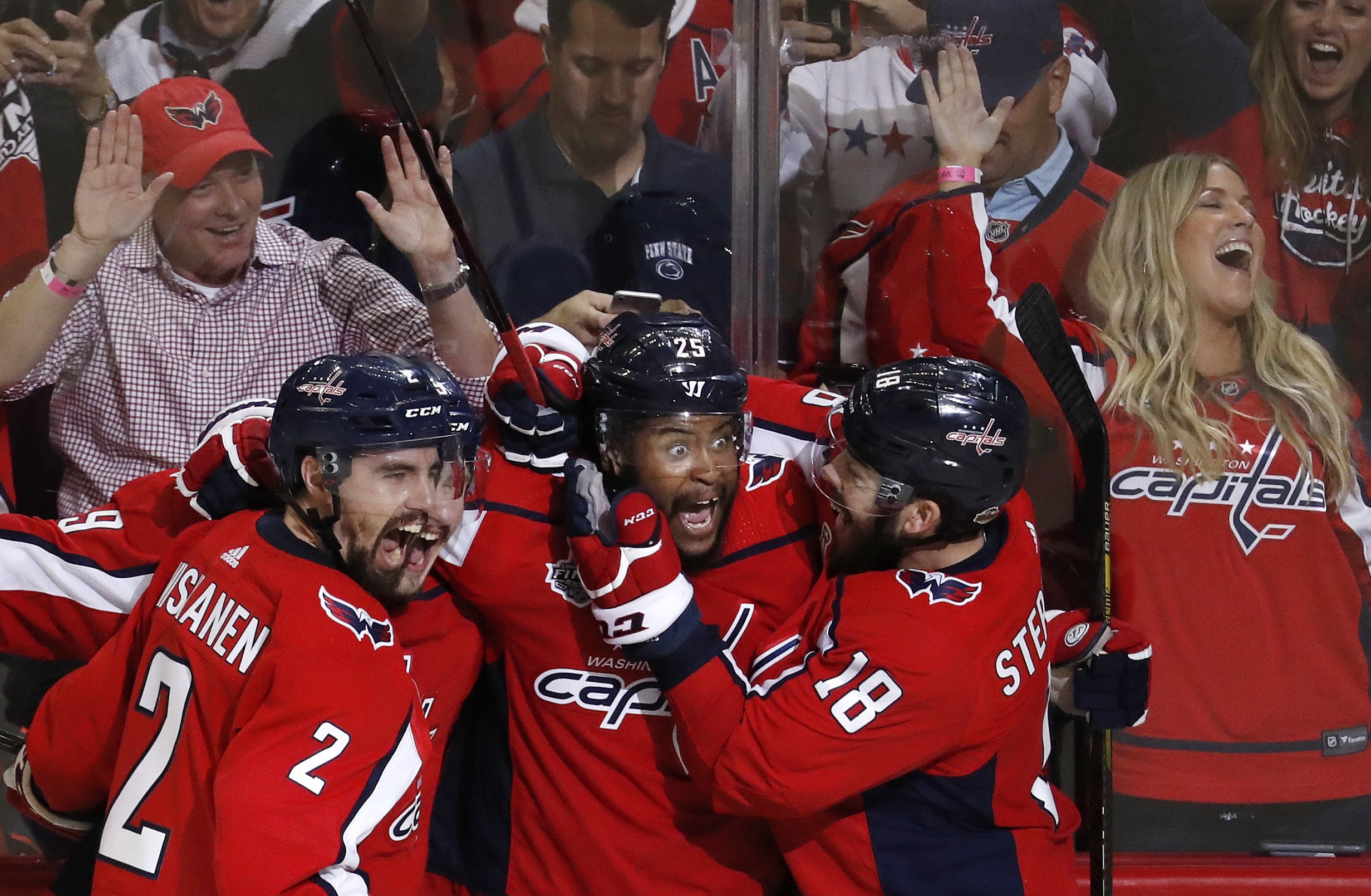 In his first home Stanley Cup Final game after 13 long years checkered with as many disappointments as milestones, Alex Ovechkin was not going to be denied the opportunity to do something special.

Ovechkin dived to the ice to score his 14th goal of the playoffs, laid down to block shots, dished out hits and, along with Evgeny Kuznetsov, muscled the Capitals past the Vegas Golden Knights 3-1 on Saturday night to take a 2-1 lead in the best-of-seven series.

Showing the kind of emotion on the ice and the bench from his younger days, Ovechkin led the way and now has Washington two wins away from the first championship in the 43-year history of the franchise.

“It’s the Stanley Cup Final,” Ovechkin said. “What do you wanna do? It’s all in for everybody.”

The Capitals suddenly look in complete control of the series thanks to Ovechkin and Kuznetsov, who fired a wrist shot past Marc-Andre Fleury that made it perfectly clear the injury that knocked him out of Game 2 was not bothering him. Invoking Michael Jordan’s 63-point game on a broken foot and 38-point game with the flu, Kuznetsov said: “When you’re hurt, you play a little better always.”

It doesn’t get much better than this for Kuznetsov and Ovechkin. As Kuznetsov flapped his arms in celebration of his goal on a 2-on-1 rush, Ovechkin screamed and raised his arms to the bench — showing the same emotion he did in the final minutes of Game 7 of the Eastern Conference final and when Braden Holtby made a stick save of a lifetime to preserve a 3-2 win in Game 2.

“It’s just automatic. You just get excited,” Ovechkin said. “It’s huge moments for us. You just want to give emotion to your teammates and to yourself, as well.”

Fired up for the first Cup Final game in Washington since 1998, the Capitals unloaded chance after chance on Fleury, who made 23 saves but couldn’t backstop a frazzled, disjointed team that lost two games in a row for the first time in the playoff and is trailing in a series for the first time.

At the other end, Braden Holtby gifted Tomas Nosek a goal by giving the puck away but stopped the other 21 shots he faced from the Golden Knights, who looked nothing like the winners of 13 of their first 16 playoff games through the first three rounds.

“All year we’ve had a lot of guys going,” Vegas defenseman Deryk Engelland said. “That hasn’t been the case. Our goalie’s been bailing us out with huge saves all night and we have to bear down and be better for him.”

The Golden Knights’ historic run in its inaugural season is now in danger of coming to an end with Game 4 back in Washington on Monday night.

“We haven’t been behind in any series,” Fleury said. “It doesn’t mean we’re out of it.”

They’re not out, but they’re down because Holtby was there when the Capitals needed him by making 21 saves on 22 shots. Of course, they didn’t need him much because they were on the attack for much of the game and also blocked 26 shots in front of Holtby.

“I think there’s more to blocking shots than just going out there and trying to get hit,” Holtby said. “We’re doing a great job of creating the right layers, guys going out there strategically to know which lane I’m picking for sight lines and they’re taking away the other half and making big blocks. That’s a huge part of why we’re having success defensively because it’s all through our lineup.”

Ovechkin attempted eight shots in the first period and scored a goal that seemed inevitable. It came 1:10 into the second period when Ovechkin threw himself full extension over Vegas defenseman Brayden McNabb to reach the rebound and backhand the puck past Fleury.

“I thought it was sort of the right thing in a playoff game, our first victory in the final at home, that Alex would score the first goal,” coach Barry Trotz said. “I thought that was a little bit of poetic justice if you will for all the tough times.

Ovechkin’s goal matched John Druce’s franchise record set in 1990 and tied him for the league lead in these playoffs.

When Kuznetsov showed his injured left arm is just fine by scoring on a perfect shot on an odd-man rush, Ovechkin looked to the ceiling with his arms extended as he was hugged by Lars Eller.

The red-clad raucous crowd was quieted when Vegas scored early in the third period. Holtby — well-aware of the Golden Knights’ ability to cross up opposing goaltenders — had his puck-handling attempt intercepted by Pierre-Edouard Bellemare. The puck skittered to Nosek for an easy goal.

Vegas built some momentum, but Devante Smith-Pelly gave the Capitals an insurance goal with 6:07 left — his fourth of the playoffs — after Jay Beagle took the puck away from Shea Theodore on the forecheck and found his teammate skating in alone on Fleury. Vegas pulled Fleury for more than two minutes at the end of the game but couldn’t break through.

The Capitals have now pieced together consecutive wins against the hottest team in the playoffs and are game-by-game exorcising the demons of the past decade and more.

“We’ve had a lot of moments, not as many good ones as we’d like, Trotz said. “In past failures you’d feel a lot of anxiety even before you started the playoffs. I think we’ve gotten past that as a group.”