Team studies bones to identify the disappeared in Mexico 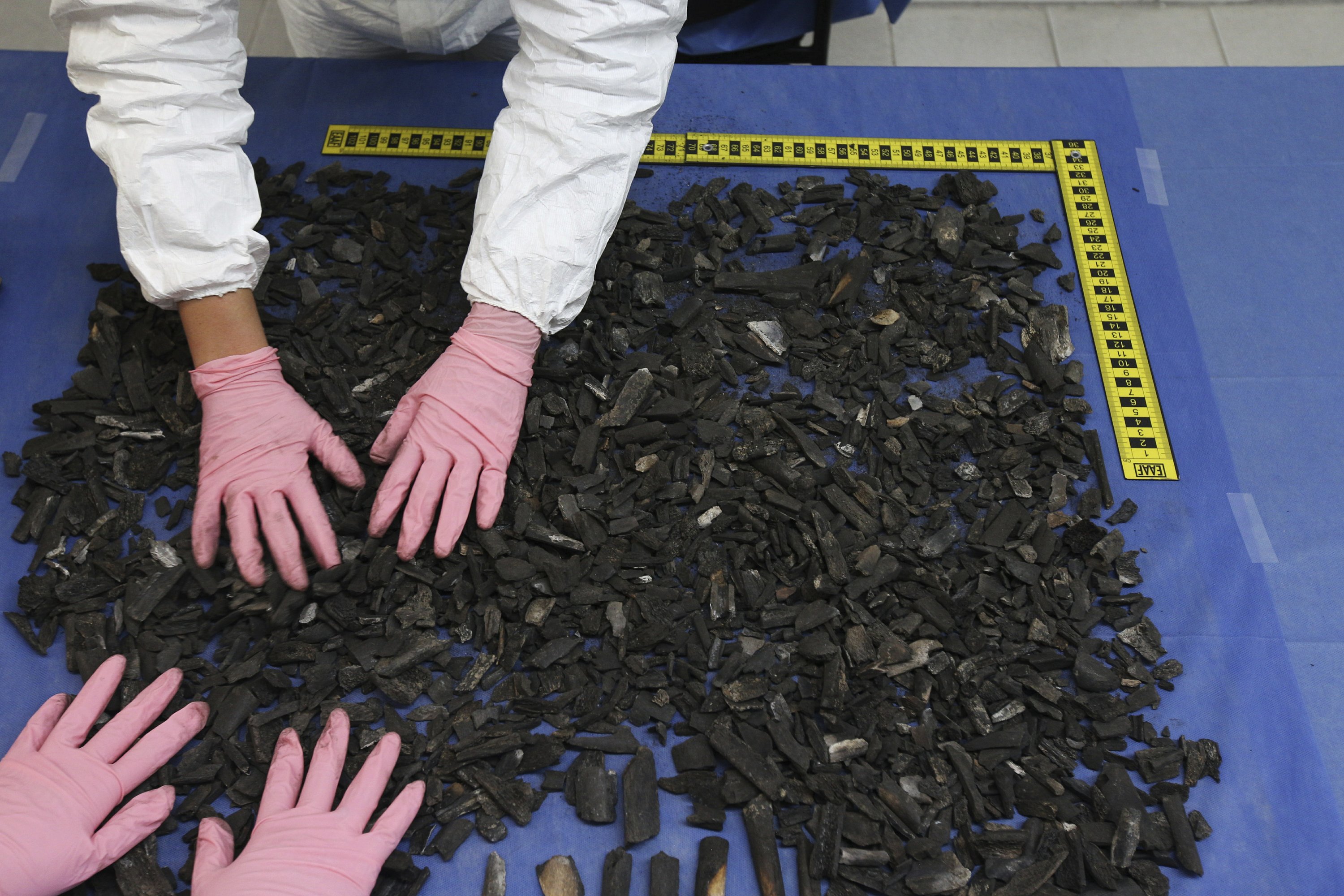 CIUDAD CUAUHTEMOC, Mexico — A pair of rubber-gloved hands carefully separates the red “Evidence” tape from a paper bag and empties the contents onto a table. Hundreds of burnt bone fragments spill out.

The fragments look like bits of volcanic pumice. Yet for the hands that gently smooth them out over the table top, each one bears a name and holds a piece of a story that nobody knows, but that someone, somewhere is desperate to hear.

The fragments laid out by investigators for the Argentine Forensic Anthropology Team are among the remains of tens of thousands of people who have simply disappeared in Mexico’s long and bloody drug war. These particular bones come from one of three isolated ranches in the city of Cuauhtemoc in the northern border state of Chihuahua, where bodies of victims were dissolved or burned in drums. Nearby stand boxes and bags of other evidence bearing the names of the places and conditions in which they were found, such as “Dolores Ranch” and “(Bone) Fragments stained with diesel.”

As President Enrique Pena Nieto prepares to leave office later this year, another administration has come and gone with little progress in solving one of Mexico’s biggest problems: the disappeared. Distrust of Mexican authorities runs deep, and many families see the Argentine experts as the only ones to offer any answers to suffering that has stretched on for a decade or more.

In January, Mexico passed a “very important” law that introduces good methods for conducting searches and classifying crimes, said Ariel Dulitzky, director of the Human Rights Clinic at the University of Texas at Austin. But the law still needs funding and political will for enforcement, and it will only work together with a crackdown on corruption, he said.

Meanwhile, the disappearances continue: 21,286 during this administration so far since Dec. 1, 2012.

Cuauhtemoc, a rural hub that marks the entrance to the imposing Sierra Tarahumara mountains, has only 170,000 people, but is nicknamed “the capital of the disappeared” for its relatively high rate of abductions. The local state prosecutor’s office has listed 676 disappearance cases in the region since 2008, and 395 are missing just within the city.

One of the largest cases is of the Munoz family, where eight people disappeared seven years ago.

The family doesn’t gather much anymore at the old, tree-shaded railway workers’ house on the outskirts of Cuauhtemoc. They were holding a Father’s Day celebration there on June 21, 2011, when their world came crashing down.

In the afternoon, some strangers came around and threw out insults, according to family members. A fight broke out, and the family called police. Officers came but didn’t do anything. One of the Munoz men took a radio from a patrol car and threw it out the window, sparking angry threats from the police, the family said.

A few hours later, a dozen pickup trucks with armed, uniformed men wearing ski masks turned up at the house. The men burst into the home and said they were looking for the radio.

“We all ran,” said Emma Veleta, the family matriarch, standing next to a banner with the photos of her husband, four sons, a grandson and a nephew who were taken away that day. “Some went in one direction, some in another.”

One of her sons held onto her and pleaded, “Mom, don’t let them take me!” But it was useless. The women were tossed to the floor.

“It was here that they grabbed them out of my hands,” Veleta said. “I never saw them again, I just heard their shouts.”

They took eight men in all. The authorities have made little progress since in finding out what happened.

“They have forgotten us,” said Albino Cruz, whose son Oscar disappeared that day. “We are going to die this way.”

Cruz and his wife, Maribel Munoz, still live in the house, and sadness hangs over the whole family like a disease. Their 3-year-old daughter shows a photo of the last collateral victim of the disappearances: the Cruz’s other son, who hanged himself in despair.

Disappearances in Mexico are rarely solved because corruption complicates investigations and encourages impunity. And resources are scarce. Experts say Mexico’s levels of violence are similar to those found in war zones, but its forensics capacity is that of a nation at peace.

The federal government says it is working on laws and helping states to improve technical methods of dealing with disappearances. It hopes to eventually draw up a national database of the missing that can be cross-referenced with thousands of unidentified bodies.

Seven years after the Munoz disappearances, the only thing the family has found is a belt buckle that could have belonged to Toribio Munoz, Veleta’s 61-year-old husband. A child recognized it among the thousands of charred fragments being analyzed by the Argentines. Local prosecutors wanted to close the case, but the family is still waiting for evidence, and the Argentine investigators are looking for a DNA match, or at least for some answers.

“Nothing has been proven,” said Luisa Munoz, Toribio’s sister and the mother of Luis Romo, then 21, who disappeared that day.

The family thinks the police were involved in the disappearances and that explains the state government’s failure to act. Assistant state prosecutor Jesus Manuel Carrasco said the officers who were there that day have since left the force.

“We cannot dismiss the possibility that they directly participated, but there is no evidence for it,” he said.

Disappearances in Mexico really started to take off in 2006, when President Felipe Calderon launched an offensive against the drug cartels. Victims’ families were afraid to report the crimes, and authorities looked the other way and sometimes even directly cooperated, said Dulitzky.

A veil of silence fell over much of Mexico, including Cuauhtemoc.

The otherwise unremarkable city was valued for its routes into the mountains, a prime drug-growing area, and the Juarez and Sinaloa cartels started fighting over it. The city’s businesses and its location, just 140 miles (350 kilometers) from the U.S. border, made it all the more attractive to export drug proceeds.

The city was “a perfect laundering machine,” said Carrasco.

Both cartels infiltrated every level of the city through money and threats. People didn’t appear dead on the streets, they simply disappeared. The lack of a corpse made the possibility of prosecution — always unlikely — almost non-existent.

The families that did file crime reports were ignored, or harassed. Some decided to leave.

Cartels are still fighting over Cuauhtemoc and people are still disappearing. But a federal law since January allows authorities to prosecute crimes even without a corpse.

The families hold out hope that the Argentine investigators can help, as they have done throughout Mexico for a decade. Authorities are not always fond of the internationally recognized experts because their very presence is evidence of official failures. However, the team always works with official permission so its results will be accepted in court, and one member is on a new advisory body to deal with disappearances.

In Cuauhtemoc, the Argentines came in only after Gov. Cesar Duarte — now accused of several crimes and on the run — left office in December 2016. They are trying to make the bones speak. State prosecutors had collected genetic samples to match fragments with several families, including the Munoz relatives, but the testing was never actually done.

The forensic team repeated the process with their own methods and standards, which included extensive interviews with families to find out any defining characteristics that could help in bone identification. They have made 13 identifications so far in the area, all from burned bone fragments found on rural ranches at the end of 2011.

The first identification was of Amir Gutierrez, a 33-year-old mechanic who disappeared in 2011. A vertebra turned out to be Amir’s bone.

His mother, Idalia Gutierrez, talks about the moment the Argentine investigators told her they had a DNA match. It was difficult news to hear, but also a kind of relief.

“I wanted to find him, alive or dead,” she said. “In my mind, I was telling myself, I cannot cry, I have to be calm, because if you cry you don’t understand what they are explaining to you.”

Mercedes Doretti, the head of the forensic team for Mexico and Central America, said the investigators prepare carefully to deliver such news to families, because it is a “tremendously difficult moment.”

She said the only way to get a family’s trust is to speak the truth, no matter how hard it is. The Argentines try to leave nothing unexamined, nothing to chance, so the family is left without doubts — even if there is nothing to bury.

“You don’t want the identification to be an act of faith, but sometimes the bone fragments are so small, you can’t physically give them anything,” Doretti said. “Then there is an issue of trust.”

In that sense, Gutierrez is lucky. She has a vertebra — and the hope that something more, some other little piece of Amir may come to light. When she has gathered all there is, she will bury it.

“He will have his funeral, as it should be,” Gutierrez said. “After that, I will search no more.”

In the last of the boxes from the Dolores Ranch, the gloved hands have chosen 109 fragments that may contain DNA or other useful information to be sent to a laboratory in Argentina.

The rest is carefully swept into an envelope, every last ash, and closed and sealed as evidence to be held safely.

Luisa Munoz doesn’t want to lose hope, and will wait for the results of the latest round of testing. Her children in the United States want her to join them, but she doesn’t want to leave her house and her little store in a dusty Cuauhtemoc neighborhood, in case one day Luis calls or returns.

Or in case one day, the Argentines give her a piece of bone that will make her cry.