The Latest: Ex-wife says she feared suspect in 6 killings 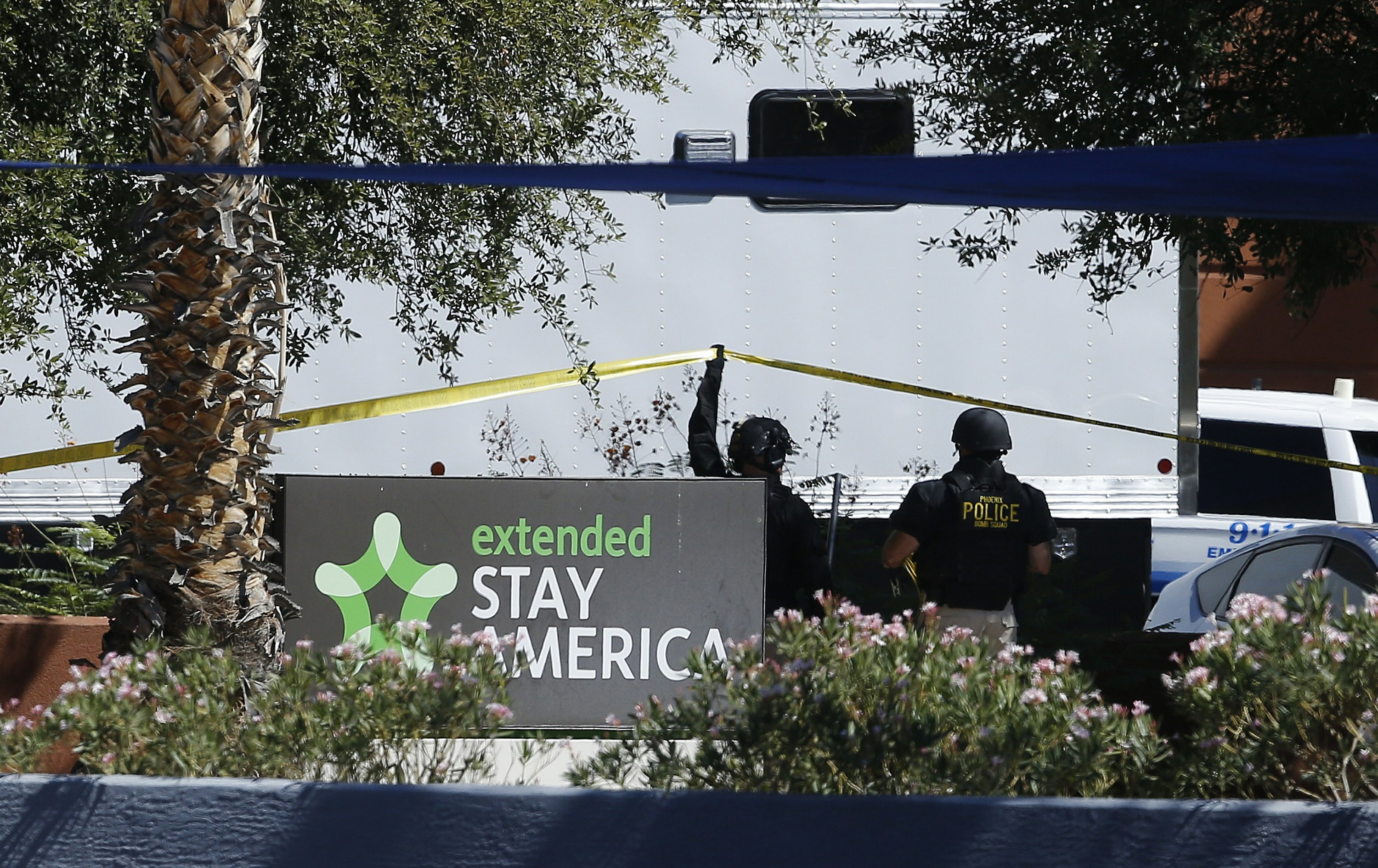 SCOTTSDALE, Ariz. — The Latest on the killing of a prominent forensic psychiatrist and three other professionals in the Phoenix area (all times local):

The ex-wife of a man suspected of killing six people with varying degrees of connection to their divorce says she’s deeply saddened by the slayings.

Police suspect 56-year-old Dwight Lamon Jones in six killings since Thursday, including that of a forensic psychiatrist who testified that he had anxiety and mood disorders.

His ex-wife, Connie Jones, said in a statement Monday that her ex-husband was an emotionally disturbed person. She said she has feared for her safety for the past nine years.

Jones said her current husband, a retired police detective, made the connection between her divorce and the crime scenes and notified police.

Psychiatrist Steven Pitt evaluated Jones during divorce proceedings and testified against him in 2010.

Two other victims, paralegals Veleria Sharp and Laura Anderson, worked for the law firm that represented Jones’ wife during the divorce.

Court records show that a prominent forensic psychiatrist had testified against a man suspected of killing him and five others in Arizona over several days.

Psychiatrist Steven Pitt evaluated Dwight Lamon Jones during divorce proceedings and testified against him in September 2010. Court records also show that Pitt told a court that Jones had anxiety and mood disorders and features of a paranoid personality.

Pitt assisted in high-profile cases including the JonBenet Ramsey investigation in Colorado.

Paralegals Veleria Sharp and Laura Anderson were killed Friday and worked for the law firm that represented Jones’ wife during the divorce.

Police also suspect Jones of killing Marshall Levine, a 72-year-old counselor and life coach, and a man and woman whose bodies were found in a suburban Phoenix home on Monday. They haven’t been identified.

Authorities say they were trailing Jones for several days and he killed himself Monday as police closed in.

Police say the man suspected of killing a prominent forensic psychiatrist, two paralegals and a marriage counselor in the Phoenix area over the last several days is now linked to two other slayings.

Authorities say they believe 56-year-old Dwight Lamon Jones also killed a man and a woman whose bodies were discovered Monday in the Phoenix suburb of Fountain Hills.

Police say the killings began Thursday with Steven Pitt, a forensic psychiatrist who assisted in the JonBenet Ramsey mystery in Colorado and a notorious Phoenix serial killer investigation.

They say the deaths Friday of paralegals Veleria Sharp and Laura Anderson were related to Pitt’s shooting as well as the Saturday killing of 72-year-old counselor Marshall Levine.

Authorities were closing in on Jones at a Scottsdale extended-stay hotel Monday when he fatally shot himself.

The family of a prominent forensic psychiatrist who police say was killed by an Arizona man suspected in at least three other deaths has thanked law enforcement for their devotion to the case.

Stephen Pitt, who assisted in high-profile cases including the JonBenet Ramsey mystery in Colorado and a notorious Phoenix serial killer investigation, was found dead Thursday near Scottsdale.

Police say a suspect in the killing of Pitt and three other Phoenix area homicides killed himself Monday as SWAT officers entered his room at a hotel.

Pitt was set to be buried Monday.

Police say a suspect in four Phoenix area homicides that happened in a three-day period killed himself as SWAT officers entered his room at an extended stay hotel.

Shots were fired as the SWAT team went into the suspect’s room but Lewis says officers did not fire any shots.

The suspect was identified only as an adult male.

Lewis says the suspect has been linked to all four of the killings. Previously police had said three of the killings were linked and they were investigating whether the fourth death was related to the other killings.

The victims were a forensic psychiatrist, two paralegals and a counselor.

Police say they have surrounded a hotel in a Phoenix suburb where a suspect linked to recent homicides may be staying.

A statement from police in the Scottsdale suburb says officers Monday morning are attempting to make contact with a suspect who was not identified.

The statement says the event “does appear to be related to the recent homicides in Phoenix and Scottsdale.”

Authorities are investigating the deaths of four professionals who were fatally shot.

The victims were identified as a prominent forensic psychiatrist, a counselor and two paralegals.

Police have said that the deaths of the psychiatrist and the paralegals were linked but were not immediately linking the death of the counselor to the other three deaths.

A fourth professional found fatally shot in a three-day span has been identified by Arizona detectives as a 72-year-old counselor and life coach, but authorities were not immediately linking his death to that of the other three.

Police in the Phoenix suburb of Scottsdale said Sunday that Marshall Levine was found shot inside an office building shortly after midnight Saturday. The Arizona Republic reported Levine worked as a hypnotherapist and life coach. He also provided marriage and divorce counseling.

On Thursday, Dr. Steven Pitt, a prominent forensic psychiatrist who assisted in high-profile murder cases including the JonBenet Ramsey mystery in Colorado, and a notorious Phoenix serial killer investigation, was found dead near Scottsdale. Witnesses reported hearing a loud argument and gunfire outside Pitt’s office.

Police said the killings Friday of paralegals Veleria Sharp, 48, and Laura Anderson, 49, were related to the Pitt shooting, but were still trying to determine exactly what linked the three victims.