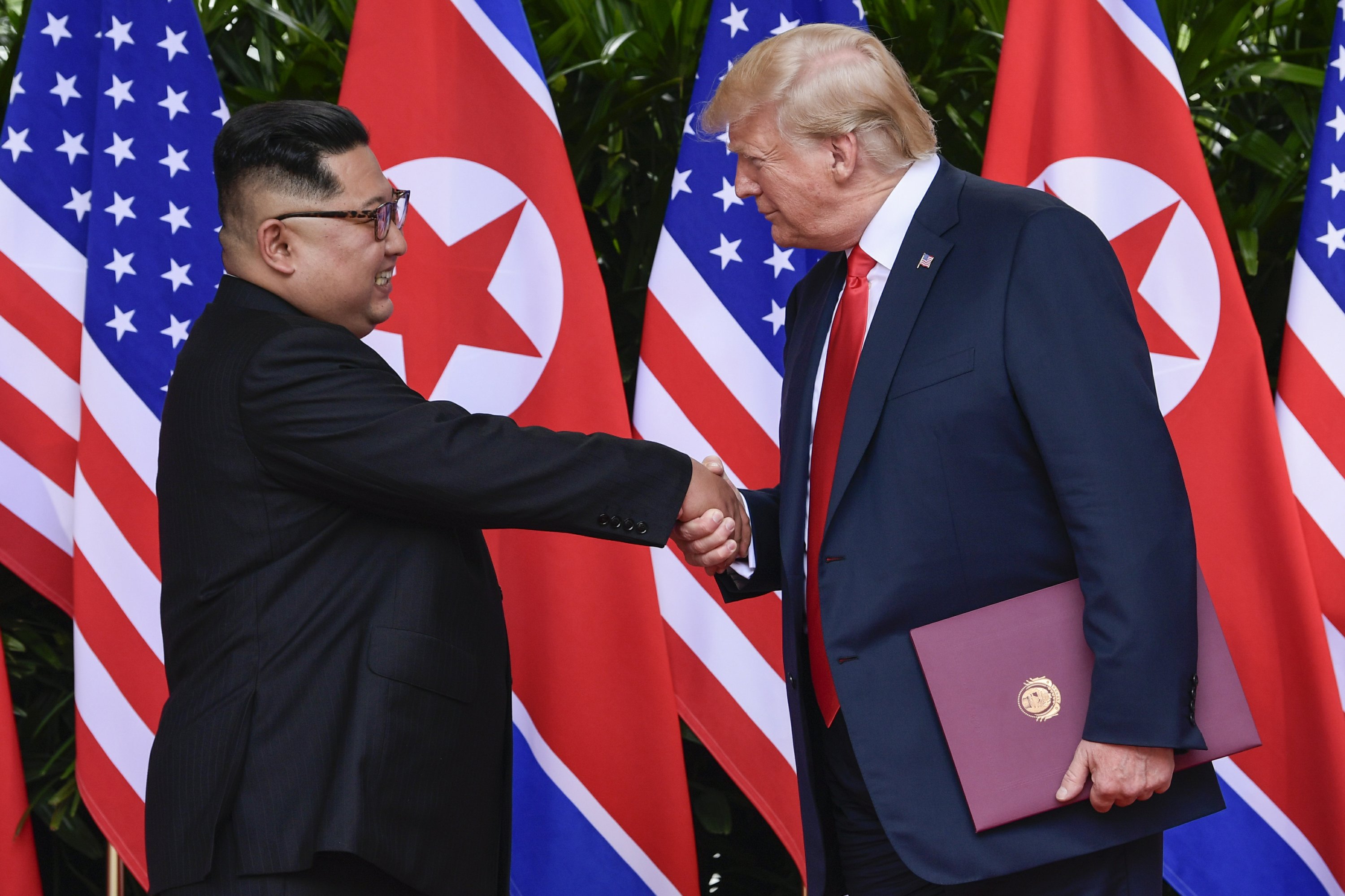 Andersen Air Force Base, GUAM — From the staged handshake before a watching world, to the debut of an infomercial about an imagined North Korea, the summit between President Donald Trump and Kim Jong Un was a made-for-the-cameras production.

While the Singapore sit-down at a luxury resort purported to be a serious conversation about a rising nuclear standoff, it was as much an opportunity for two decidedly unorthodox leaders to put on a show. From its start, the men embraced the power of the image over the substance, both keenly aware that the eyes of the world were fixated right where they’d intended: on them.

Each moment of the high-stakes summit at a luxury resort on a Singapore island appeared designed for the cameras. Just after its start, both men walked toward each other from opposite ends of a colonnade, pausing before a row of alternating U.S. and North Korean flags for a lengthy handshake as cameras flashed and video and photos were beamed around the world.

The image alone had deep, historic import, and surreal quality that even the leaders couldn’t ignore. “I think the entire world is watching this moment,” Kim said through an interpreter, comparing it to fantasy and a “science fiction movie.”

Others thought of a different genre.

For Trump, the reality television star turned surprise commander in chief, it was a chance to show off his deal-making skills on a global stage to a skeptical world. To Kim, an autocratic leader reviled by most of the international community, it represented a play for international legitimacy though a public greeting with the leader of the free world.

Both were aware that the once-unthinkable meeting between a sitting U.S. president and a North Korean leader was a media blockbuster, drawing journalists from around the world, international viewers and mobs of cellphone-waving onlookers in the Asian city-state chosen for their sit-down. The buildup was filled with cliffhangers, from the name-calling to Trump’s first shocking announcement they would meet, to its sudden cancellation and resurrection.

Historians were quick to point out the joint statement the two leaders signed was actually far less detailed than those struck with North Korea in the past, the same ones that Trump has repeatedly derided for ending in failure and perpetuating the nuclear threat.

Trump immediately sold the deal — on television. He appeared before hundreds of journalists at a news conference, the sort of free-wheeling media session that he’s determinedly avoided for most of his presidency. It wasn’t a surprise that he took his message to unabashed supporter Sean Hannity for a Fox News Channel interview, but he also sat down with ABC News’ George Stephanopoulos for his first interview with a broadcast network in more than a year.

Stressing that he had tried to pitch Kim on possible economic gains, Trump played for reporters a video depicting a utopian North Korea-of the-future, where speedboats glide alongside opulent, modern skyscrapers. Then he disclosed that he’d screened the film, produced for the occasion, for Kim.

“That was a tape that we gave to Chairman Kim and his people, his representatives. And it captures a lot. It captures what could be done,” Trump said Tuesday.

Proving he was a worthy foil, Kim stole the show from Trump on Monday night. The autocrat left his hotel and took a tour of some popular night spots, surrounded by a horde of security officials and breathlessly carried on live television, with people watching a leader who rarely leaves his home, much less goes out in public.

Before leaving Singapore, Trump suggested a sequel as he talked about hosting Kim at the White House.