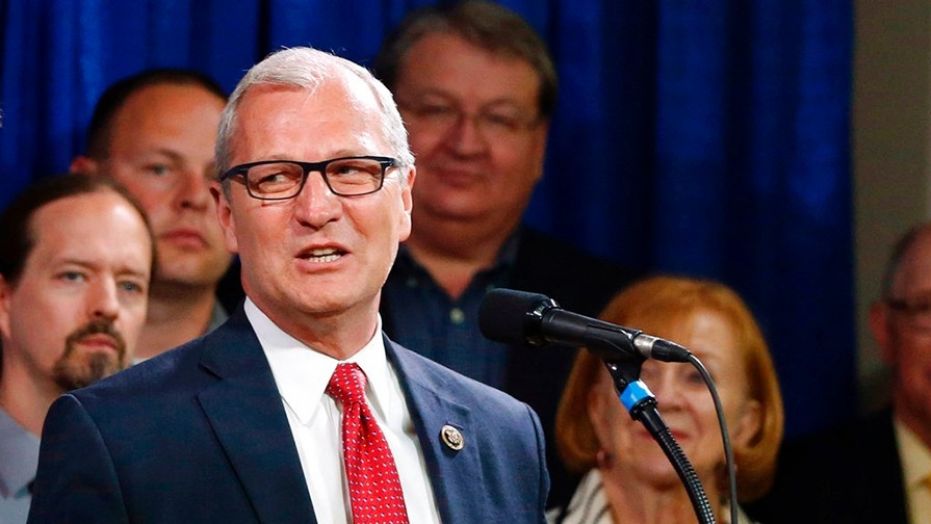 The Latest on primaries in five states (all times EDT):

Armstrong, an attorney from Dickinson, has strong ties to the state’s oil industry.

He’ll face Democrat Mac Schneider, a Grand Forks attorney who had no opposition in the primary. Schneider served two terms in the North Dakota Senate before being unseated in 2016.

The construction lawyer and yoga studio owner defeated Toby Smith on Tuesday and will go on to face a Republican in November’s general election.

The district, which includes Charleston and the southern coast, has not elected a Democrat since 1978.

Incumbent Henry McMaster has been forced into a runoff for the Republican nomination in South Carolina’s gubernatorial primary.

McMaster was an early supporter of President Donald Trump, and he was the top vote-getter in Tuesday’s primary. But he failed to win the 50 percent necessary to avoid a runoff. Now, he and Greenville businessman John Warren are headed for a second contest June 26.

Cramer now faces a tougher campaign to unseat Democratic Sen. Heidi Heitkamp in a race seen as critical for control of the closely divided Senate.

Cramer is a former state Republican Party chairman. He was first elected to the House in 2012 and has easily won re-election twice since then.

Cramer initially passed up the Senate race this year but said he changed his mind at the urging of President Donald Trump and others who saw him as the GOP’s best hope to defeat Heitkamp.

History is being made, in slow motion, in Maine where ranked-choice voting is being used for the first time in a statewide primary election.

Democrats and Republicans ranked candidates for governor from first to last in Tuesday’s primaries in a system that’s sometimes called instant runoff voting in 11 local jurisdictions where it’s currently in use.

But there’s nothing instant about Maine’s process.

If there’s no majority winner, then the ballots will be shipped to the state capital for additional tabulations. Under the system, last-place candidates are eliminated and votes reallocated until there’s a winner.

If it comes down to that, then Secretary of State Matt Dunlap said winners won’t be announced until sometime next week.

Smith has led the pack in fundraising, but recent polling in the race showed many voters had yet to make up their minds.

Smith has served in the state Legislature for 22 years. He was a JAG officer in the U.S. Army Reserve and South Carolina Army National Guard but resigned his commission after the Sept. 11 attacks to enlist in the infantry.

Corey Stewart has won the Republican nomination for U.S. Senate in Virginia and will face incumbent Tim Kaine in the November general election.

Stewart is a conservative provocateur who often feuds with members of his party. He’s a one-time state chairman of President Donald Trump’s 2016 presidential campaign and nearly won the 2017 Republican nomination for governor.

He has pledged to run a “vicious” campaign against Kaine.

The Democrat is the early favorite to win the general election. Virginia Republicans haven’t won a statewide race in nearly a decade, and Kaine has a massive fundraising advantage over Stewart.

U.S. Rep. Barbara Comstock has won the GOP nomination as she seeks re-election in her northern Virginia congressional district that is a prime target of Democrats trying to gain control of the House.

In the Tuesday primary, Comstock fought off a challenge from Shak Hill, who attacked the two-term incumbent as insufficiently conservative and weak in her support of President Donald Trump.

Comstock represents Virginia’s 10th Congressional District. It stretches from the wealthy suburbs of McLean, inside the Capital Beltway, west to Winchester. Comstock won re-election in 2016 with 53 percent of the vote, but Democrats have high hopes of claiming the seat. Voters there supported Hillary Clinton in 2016 by a 10-point margin over Trump.

Six Democrats ran in that party’s primary Tuesday for the opportunity to unseat Comstock.

Democrats have elected state Sen. Jennifer Wexton as their nominee in a northern Virginia congressional district key to the party’s hopes of gaining control of the U.S. House.

The 10th District stretches from the wealthy suburbs of McLean inside the Capital Beltway west to Winchester. It is considered the most likely seat in Virginia to flip from Republican to Democratic — Hillary Clinton carried the district by 10 points in 2016, though Republican incumbent Barbara Comstock won re-election with 53 percent of the vote.

The race attracted six Democrats, including four who raised $980,000 or more. Wexton was the only elected official and the favorite after receiving the endorsement of Gov. Ralph Northam.

But several other candidates outraised or matched Wexton in fundraising. One competitor, Alison Friedman, committed $1 million of her money.

Polls have closed in Virginia and South Carolina’s primary elections.

A bellwether Virginia congressional district promises to be among the most watched races nationally Tuesday as five states hold primaries.

President Donald Trump also will be a factor, notably in two Republican primaries in South Carolina.

Trump is weighing in for South Carolina Gov. Henry McMaster, an early supporter of the president’s 2016 campaign, and against Republican Rep. Mark Sanford, an outspoken critic of the president who is facing a Trump devotee.

Elections are also scheduled in Maine, Nevada and North Dakota. Together, they raise to 21 the number of states having held their 2018 primary elections so far.

Trump says Sanford “has been very unhelpful to me” and is poking fun at his infamous disappearance in 2009, when he was found to have been carrying on an extramarital affair with a woman in Argentina.

Sanford was elected during a 2013 special election to the U.S. House seat he had held previously despite the controversy which led to his divorce from his wife, Jenny.

Trump tweeted his endorsement of Arrington along with the swipe at Sanford.

A bellwether Virginia congressional district promises to be among the most watched races nationally in primary elections in nearly every region of the country Tuesday.

President Donald Trump also will be a factor, notably in two Republican primaries in South Carolina.

South Carolina Gov. Henry McMaster has the president’s backing but faces challenges from four other candidates. Republican Rep. Mark Sanford faces a challenge from a state lawmaker painting the outspoken former governor as insufficiently loyal to the president.

Elections are also scheduled in Maine, Nevada and North Dakota. Together, they raise to 21 the number of states having held their 2018 primary elections so far.

Sign up for “Politics in Focus,” a weekly newsletter showcasing the AP’s best political reporting from across the United States leading up to the 2018 midterm elections: http://apne.ws/3Gzcraw