US seeks to assuage Asian allies after North Korea summit 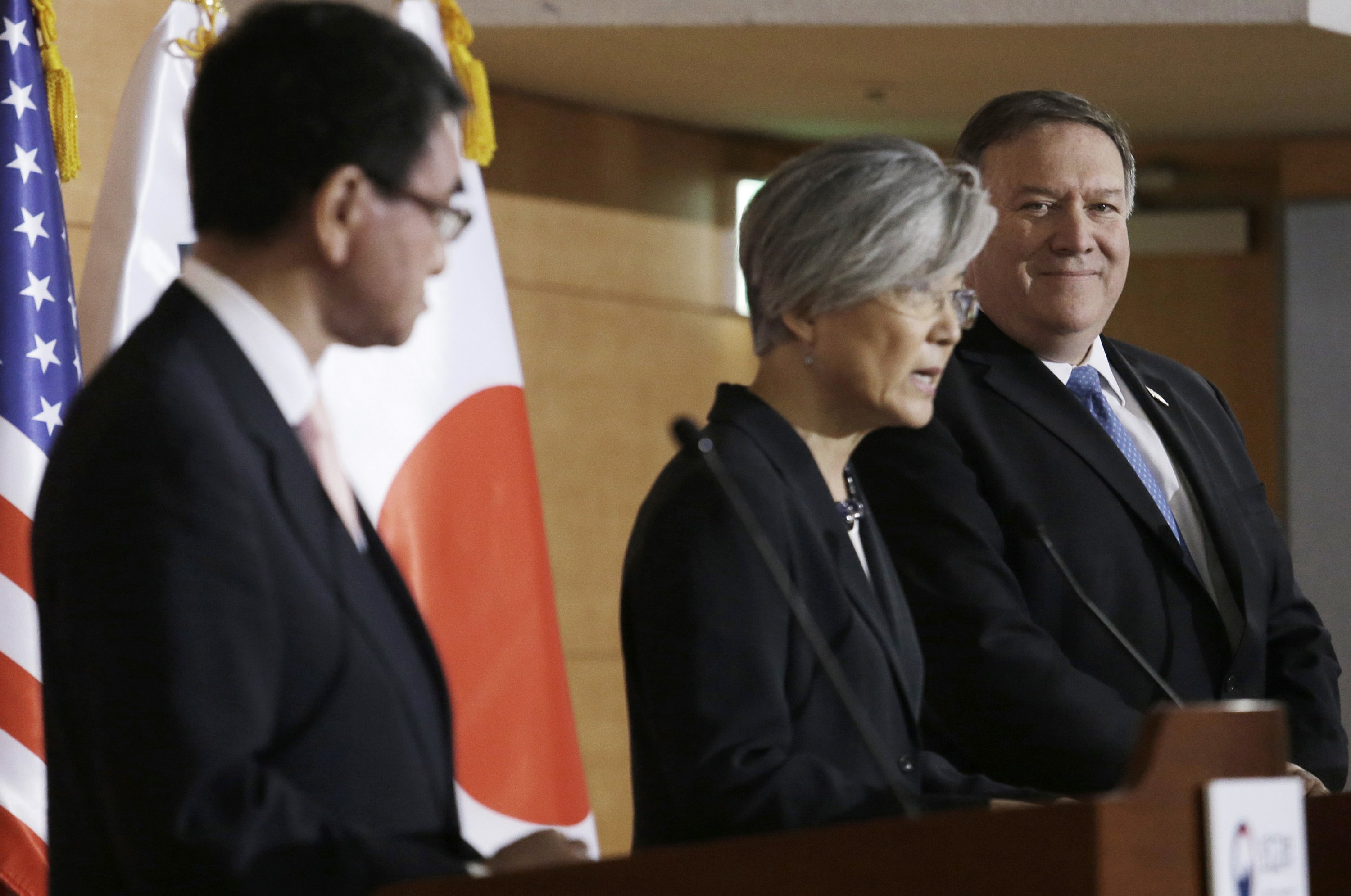 SEOUL, South Korea — The United States and its Asian allies worked Thursday to paper over any semblance of disagreement over President Donald Trump’s concession to Kim Jong Un that the U.S. would halt military exercises with South Korea, with Trump’s top diplomat insisting the president hadn’t backed down from his firm line on North Korea’s nukes.

U.S. Secretary of State Mike Pompeo, meeting with top South Korean and Japanese diplomats, put a more sober spin on several moves by Trump after his summit with Kim that had fueled unease from Washington to Tokyo and Seoul. He said Trump’s curious claim that the North’s nuclear threat was over was issued with “eyes wide open,” and brushed off a North Korean state-run media report suggesting Trump would grant concessions even before Pyongyang fully rids itself of nuclear weapons.

“We’re going to get denuclearization,” Pompeo said in the South Korean capital. “Only then will there be relief from the sanctions.”

On the joint U.S.-South Korea drills that Trump — after meeting Kim — said would be terminated, Pompeo emphasized a key caveat: If the mercurial North Korean leader stops negotiating in good faith, the “war games” will be back on. 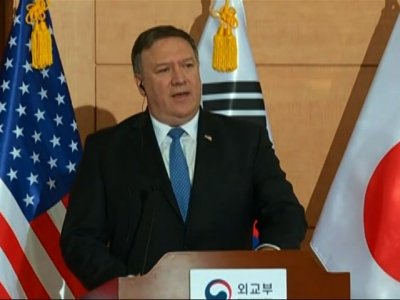 Secretary of State Mike Pompeo says President Trump’s tweet about North Korea no longer posing a nuclear threat was made with eyes wide open. He also says North Korea will get no economic sanctions relief until it completes denuclearization. (June 14)

The words of reassurance from Pompeo came as diplomacy took place in the uncertain aftermath of the summit Tuesday in Singapore, the first between a sitting American president and North Korea’s leader in six decades of hostility. In the village of Panmunjom along the North-South border, the rival Koreas on Thursday held the first high-level military talks since 2007, focused on reducing tensions across their heavily fortified border.

Yet even as U.S. and South Korean officials sought to parlay the momentum from the dramatic summit into more progress on the nuclear issue, there were persistent questions about whether Trump had given away too much in return for too little.

Trump’s announcement minutes after the summit’s conclusion that he would halt the “provocative” joint military drills were a shock to South Korea and caught much of the U.S. military off guard, too. Pyongyang has long sought an end to the exercises it considers rehearsals for an invasion, but U.S. treaty allies Japan and South Korea view them as critical elements of their own national security.

So Pompeo had some explaining to do as he traveled to Seoul to brief the allies on what transpired in Singapore.

In public, at least, South Korea’s leader cast the summit’s outcome as positive during a short meeting with Pompeo at the Blue House, South Korea’s presidential palace. President Moon Jae-in, an avowed supporter of engagement with North Korea, called it “a truly historic feat” that had “moved us from the era of hostility towards the era of dialogue, of peace and prosperity.”

Still, there were signs as Pompeo met later with the top Japanese and South Korean diplomats that concerns about the freeze had not been fully resolved. South Korean Foreign Minister Kang Kyung-wha, speaking in Korean, told reporters afterward that the military drills issue “was not discussed in depth.”

“This is a matter that military officials from South Korea and the United States will have to discuss further and coordinate,” Kang said.

The U.S. has stationed combat troops in South Korea since the end of the Korean War and has used them in a variety of drills. The next scheduled major exercise, involving tens of thousands of troops, normally would be held in August.

After his talks in Seoul, Pompeo flew Thursday to Beijing, where he was to update the Chinese government about the talks. North Korea’s economic lifeline, China has been praised by Trump for ramping up economic pressure on the North that the U.S. believes helped coax Kim Jong Un to the negotiating table.

The summit in Singapore did mark a reduction in tensions — a sea change from last fall, when North Korea was conducting nuclear and missile tests and Trump and Kim were trading threats and insults that stoked fears of war.

Kim is now promising to work toward a denuclearized Korean Peninsula and state media heralded the meeting as victorious, with photos of Kim standing side-by-side with Trump on the world stage splashed across newspapers in Pyongyang. On Thursday, North Koreans finally got a glimpse of video of Trump and Kim together, as official Korean Central Television broadcast the first footage of Kim’s trip to Singapore.

Trump seemed equally ecstatic. As he landed Wednesday in Washington following the summit, he declared on Twitter that America and the world can “sleep well tonight.”

“There is no longer a Nuclear Threat from North Korea,” Trump wrote, even though North Korea has yet to give up any of its fissile material, estimated by independent experts to be enough for between about a dozen and 60 nuclear bombs.

Pompeo rejected the suggestion that Trump’s Pollyannaish assertion was premature. He said Trump was proceeding “with eyes wide open” to the prospect that diplomacy may falter, and that Trump was merely reflecting the historic nature of his confab with Kim. The Korean War ended in 1953 without a peace treaty, leaving the United States and North Koreas in a technical state of war.

With the Trump-Kim summit concluded, the baton was being passed to lower-level U.S. and North Korean officials, who Pompeo said would likely resume meeting as early as the next week to hash out details of a disarmament deal, sure to be a complex and contentious process. He said the U.S. was hopeful North Korea would take “major” disarmament steps before the end of Trump’s first term in office, which concludes in January 2021.

In the brief, four-point joint statement that emerged from the summit, North Korea committed “to work toward complete denuclearization of the Korean Peninsula” — a promise it has made and reneged on several times in the past 25 years.

The statement made no mention of verification, despite Trump’s longstanding insistence on “complete, verifiable and irreversible” denuclearization. But Pompeo bristled at reporters who pressed him about that apparent omission, calling questions on the topic “insulting and ridiculous.”

The omission is irrelevant, Pompeo said, adding that he was confident the North Koreans fully understood that verification would be a necessity. He pointed out that the statement makes reference to a previous agreement that did mention verification, and argued that as a result, the Trump-Kim statement automatically “incorporates” verification without having to state it outright.