Inside the summit: Talks with aliens, familiar frustrations 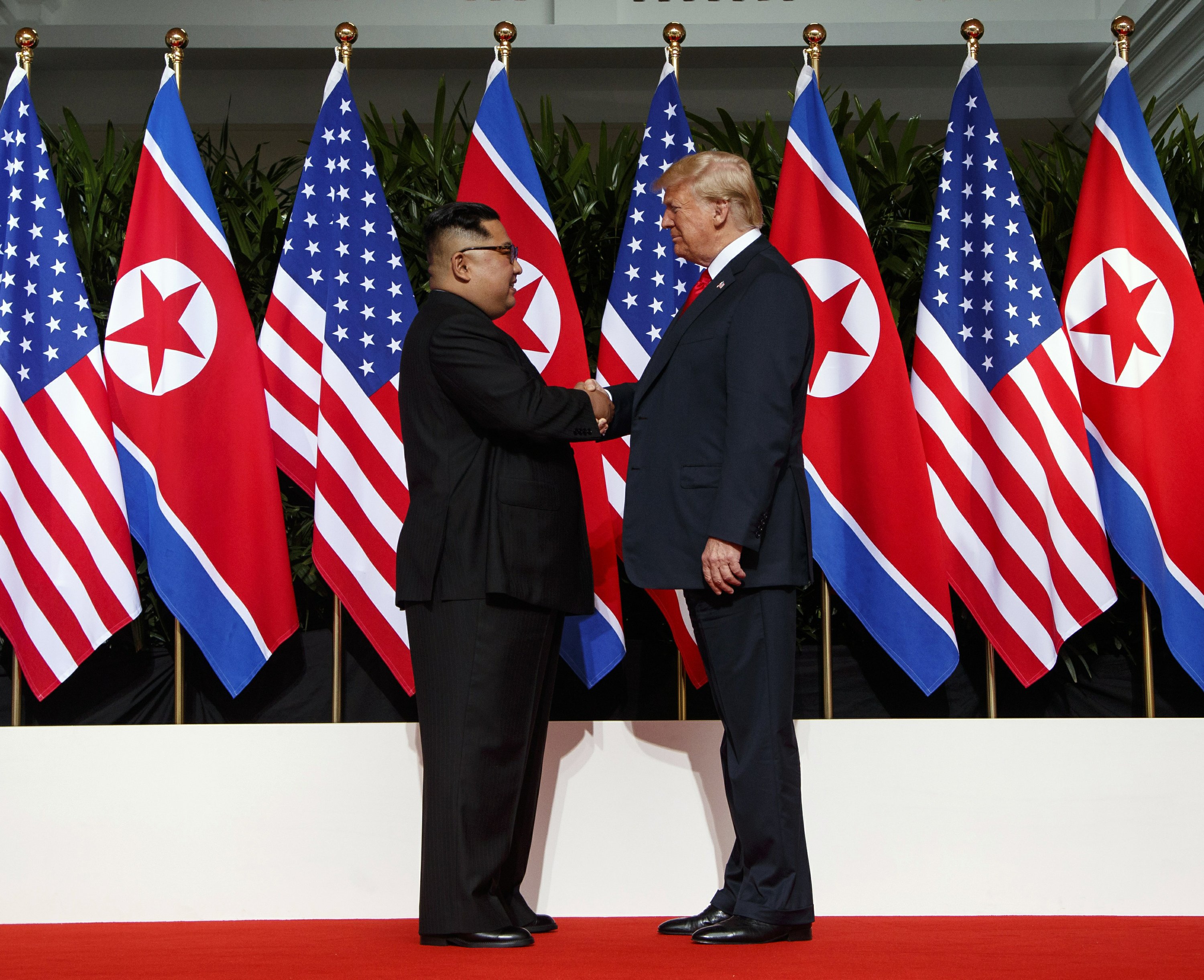 WASHINGTON — President Donald Trump got the history-making handshake he wanted with North Korea’s Kim Jong Un. Now, with the smiling snapshot a part of history, new details are emerging about the bizarre behind-the-scenes negotiations that led up to the summit — and about the president’s post-summit frustrations with how it’s being portrayed.

Setting up the Singapore meeting was no easy feat for the technically still-warring heads of state, requiring planners to accommodate confounding requests and paranoia. But neither has it been easy for Trump to sell the plan to a doubting class of experts, allies and the media. He’s chafing at the skepticism swirling about the nuclear accord that he wants to define his legacy.

Scenes from inside the summit:

Like talking with “aliens.” Sitting at tables at the luxurious Capella Hotel in Singapore or in the sparse Demilitarized Zone on the Korean Peninsula, that’s how U.S. officials involved in negotiations with their North Korean counterparts described their conversations ahead of the summit.

The North Koreans had never before participated in an event of the sort, were unfamiliar with notions of press access and deeply afraid about both espionage and assassination. The North Korean logistics teams struck the Americans as organized, detail-oriented and mission-focused, said one official involved in the planning. There were also a number of women involved in senior roles, surprising to the U.S. side.

On the day before the summit, U.S. and North Korean officials met throughout the day in Singapore to hash out areas of agreement for what became the joint statement issued by the two leaders on Tuesday. The U.S. team wanted to send in an official photographer to capture the moment for history — a manifestation of the White House’s desire to turn the summit into an international media event — but the North Koreans balked.

“How do we know she’s not a spy?” protested the North Koreans. They eventually agreed the photographer could attend, said an official familiar with the discussions with the North Koreans who wasn’t authorized to discuss it and insisted on anonymity.

Similar worries had come up earlier in the talks when the Korean delegation voiced concerns that cameras belonging to the press could be concealed weapons.

There was hardly trust on the U.S. side either. Kim, after all, is accused by the U.S. of ordering the murder of his half-brother with a nerve agent last year.

From the first logistical talks in Singapore, it was clear to U.S. officials that overcoming the security trust gap was among the most significant hurdles to getting the two leaders into the same room.

For every person the White House wanted to put in the room for the meetings, the North wanted to know how they would know the person was not there to spy on the proceedings or harm Kim.

U.S. officials credited the Singaporean government for helping to prevent the mistrust from sinking the summit.

Checkpoints were jointly patrolled by U.S., North Korean, and Singaporean officials, with some journalists on site required to undergo separate security sweeps by each of the three parties. U.S. officials agreed to cap the number of U.S. government officials they allowed onto the luxury summit property to match the far smaller North Korean delegation.

It left all but the most senior American negotiators, including many subject matter experts, monitoring the proceedings via television and emailed updates from the president’s hotel, a 20-minute drive away.

At a formal signing ceremony Tuesday afternoon, a gloved North Korean official inspected Kim’s chair and the black felt-tipped pen bearing Trump’s signature in gold that was positioned for Kim’s use.

At the last minute, Kim’s sister, Kim Yo-jong, who was standing to his side, provided a pen of her own for his use.

The U.S.-supplied pen was later retrieved, unused, by a White House staffer.

Throughout the summit preparations, U.S. officials described the North Koreans as focused on ensuring they were not the junior partner in the talks.

In a symbolic concession, the DPRK (Democratic People’s Republic of Korea) was listed above the U.S. in the official summit logo on credentials for the summit. The White House also agreed to limit the number of journalists allowed to cover some events to mirror the North Korean contingent of state-run media.

Still, Trump appeared to be in the driver’s seat, clapping Kim on the back and directing over to their interpreters to start their one-on-one meeting. The U.S. president also signaled for reporters in the room to be escorted out — after both took questions from the journalists.

On the final day before the summit, officials at the White House National Security Council back in Washington grew incensed over a New York Times report suggesting that “science is unwelcome” in Trump’s administration and that the U.S. negotiating team was devoid of nuclear physicists. So the White House issued a directive to Secretary of State Mike Pompeo: He would go in front of cameras in Singapore and call out the newspaper by name, an official familiar with the instruction said. Pompeo complied.

“Before discussing the summit, I want to address a report in The New York Times,” Pompeo opened. “Any suggestion that the United States somehow lacks the technical expertise across government or lacks it on the ground here in Singapore is mistaken.”

Now that he’s back home, Trump has been fuming privately and publicly over the skeptical news coverage about his signed agreement with Kim. Never steeped in details or history, the president feels he has made ground-breaking progress, as evidenced by his grand statements telling the world to “sleep well.” Back in DC, in a terrible mood, he is frustrated by all the questions about the fine print.

Trump has been calling lawmakers to express enthusiasm for the agreement — but also complaining that he has not had more robust support from GOP lawmakers, said a person with knowledge of the calls, who spoke on condition of anonymity to share internal conversations. While the president calls the summit a “first step,” with more meetings sure to come, he also has been arguing that he has already done more than his predecessor, President Barack Obama.