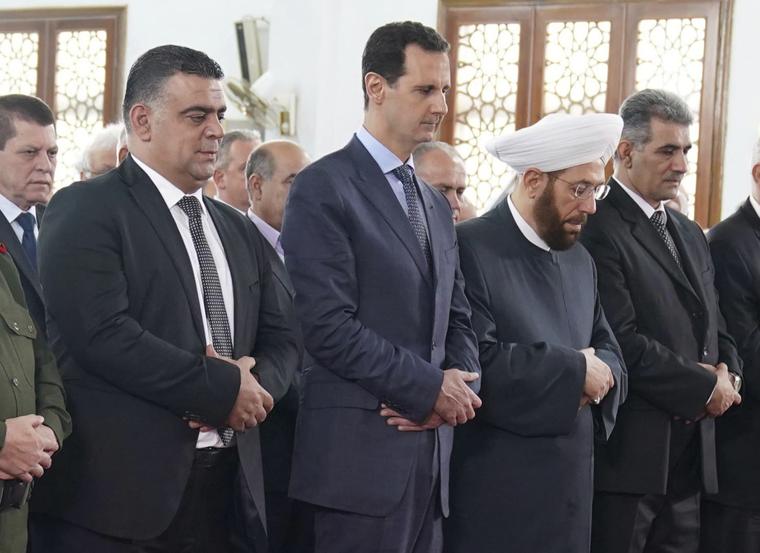 Syrian President Bashar Assad has attended Eid al-Fitr prayers at a mosque in Tartous, a town in the coastal region that has remained loyal to the president through seven years of civil war.

The coastal region is home to Syria’s minority Alawite population that has been the core of Assad’s support. Assad, an Alawite, traces his family’s origins to Qardaha, a town in the mountains nearby.

Tens of thousands of men from the coastal region are believed to have been killed fighting for the president since 2011, according to Syrian monitoring groups. The government in Damascus does not publish official figures.

In May, with Assad claiming victory against the last insurgents near the capital, the government discharged soldiers conscripted before the 2011 uprising against Assad’s rule, letting them return to civilian life for the first time in eight years.

Palestinians have performed the traditional morning prayer of the Muslim holiday of Eid al-Fitr near Gaza’s perimeter fence with Israel, as part of weeks-long protests against a blockade of the territory.

The protests have been led by Hamas, the Islamic militant group ruling Gaza, with turnout driven by despair over blockade-linked hardships.

Hamas leader Ismail Haniyeh joined about 2,000 worshippers Friday in one of the areas near the fence, pledging that protests would continue. More than 120 Palestinian protesters have been killed and more than 3,800 wounded by Israeli army fire since March.

Haniyeh says the protests have “revived the Palestinian issue” by refocusing world attention. He praised a recent U.N. General Assembly resolution earlier this week that accused Israel of using excessive force against the protesters.

He praised citizens for showing up at massive rallies last Friday in support of the Palestinians on al-Quds, or Jerusalem Day. That day was initiated by Iran in 1979 to express support for the Palestinians and oppose Israel.

President Hassan Rouhani said in an Eid al-Fitr message: “I believe the land of Palestine will be returned to owners of the land with the help by god.”

Afghan President Mohammad Ashraf Ghani is touting a three-day cease-fire with the Taliban in an address to the nation heralding the Islamic holiday of Eid al-Fitr.

The holiday marks the end of the Ramadan holy month, when devout Muslims fast from sunrise to sunset.

The cease-fire took effect at midnight Friday and lasts through the three-day holiday.

Ghani is using the opportunity to appeal for a lengthier cease-fire and call for the Taliban to come to the negotiating table instead of returning to the battlefield.

The Taliban agreed to the cease-fire but leader Haibaitullah Akhunzada reiterated his demand for talks with the U.S. before sitting down with the Afghan government.

Across Asia, the faithful are celebrating the end of the holy month in Indonesia, Pakistan, Malaysia and the Philippines.