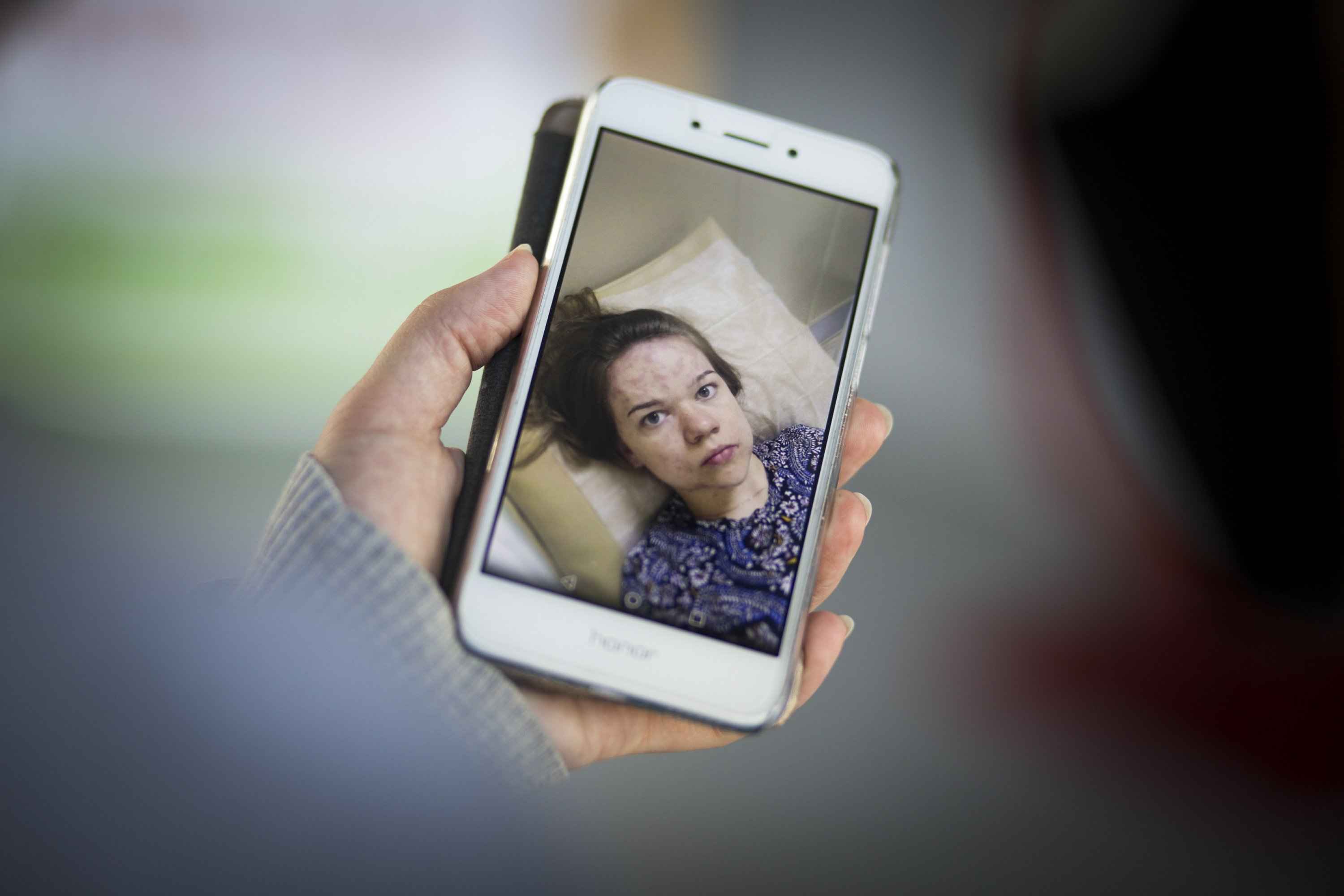 KOLOMNA, Russia — Walking to a store in March, Olga Yevseyeva was hit by the familiar, noxious stench of rotten eggs wafting from the town landfill a few miles away. It was a moment that changed her life.

“This smell just made me explode with anger,” she recalled of that spring night in Kolomna, a town about 60 miles (100 kilometers) southeast of Moscow. “And I realized something had to be done, because you can’t just go on like this.”

Never politically active, the 34-year-old Yevseyeva joined hundreds of other residents who stood in the middle of the road a few weeks later, blocking garbage trucks from delivering more of the waste to the landfill.

Thousands of activists have taken part in such demonstrations in the towns surrounding Russian capital in recent months, complaining that they are being used as a dumping ground for Moscow’s trash. They say the foul gases from the decomposing landfills have given them and their children respiratory problems, skin rashes and other ailments, and have rendered their homes unlivable and unsellable.

The growing outrage at the shadowy owners of the lucrative waste management companies and government officials who seem indifferent or offer only short-term solutions has driven some to violence: One man charged a garbage truck with an ax and another opened fire with a gun; someone even tried to set a landfill on fire.

Yevseyeva and several others were detained for their unsanctioned protest in Kolomna, and she ended up losing her job at the curtains store where she worked.

President Vladimir Putin, at his annual call-in show last summer, got a complaint by residents of Balashikha, another town near Moscow. They said their landfill — the largest in the capital region — was a health hazard. Putin ordered it closed by the end of the year.

The trash from Moscow’s nearly 12 million people and the surrounding region, which together account for 20 percent of all the garbage produced in Russia, still had to go somewhere, and waste management companies scrambled to find other places to dump it.

One site was near Volokolamsk, a picturesque medieval town of white churches about 110 kilometers (68 miles) west of Moscow, where the large Yadrovo landfill recently had been privatized.

But as the Yadrovo dump overflowed and the organic waste decayed under the topsoil, a mixture of hydrogen sulfide and methane gases enveloped the town during the winter. Residents inundated Mayor Pyotr Lazarev with complaints of rashes, headaches and coughs. He said he was powerless even to inspect the landfill, adding that regional health officials had assured him there was no risk.

The smell sometimes kept Tatyana Kunyakina awake at night and gave the 27-year-old waitress a cough for two months. On March 20, her 7-year-old son awoke with a fever, cough and red eyes.

The next day, more than 50 children were brought to Volokolamsk’s hospital, with about 20 admitted. An angry crowd formed.

“I saw ambulances parked by the school in the morning and thought something must have happened to the kids,” Lazarev recalled. “It was scary: A crowd of women burst into my office in tears.”

The protest drew a quarter of Volokolamsk’s 20,000 people. When Moscow Region Gov. Andrei Vorobyev arrived, he was pelted with snowballs amid shouts of “Resign!” A 10-year-old girl in a pink cap made a throat-cutting gesture at him, and video of that image became an internet sensation.

Authorities later declared a temporary state of emergency, saying the landfill was belching alarmingly high levels of hydrogen sulfide. A Dutch company was hired to remove the toxic gases from under the soil.

One action Vorobyev did take: He fired the town’s local administrator.

Protests soon grew in nearby towns over their fast-filling landfills.

“People who saw Volokolamsk said, ‘So you can do it like this?’ These people are really desperate,” said Alexei Kiselyov, head of Greenpeace Russia’s toxic waste program. “The situation in Volokolamsk has been a norm for all of Russia for years, but it took a real emergency to get media attention.”

Kolomna residents set up a camera to track the 150 to 200 garbage trucks arriving on a typical day. Activists in Klin, Naro-Fominsk, Zaraysk, Voskresensk and other towns blocked roads, filed lawsuits and tried to tally how much trash was being dumped.

But the activists have faced threats and intimidation.

Regional officials dismissed them as alarmists and paid provocateurs; doctors have refused to cite the landfill as the cause of the health problems, sometimes even after documenting the cases; and parents of affected children have stopped talking to reporters. Some protesters have lost their jobs, were jailed for 15 days or had their businesses raided.

Kunyakina, the Volokolamsk waitress, said she came down with rashes and swelling on her face, chest and arms in late May. When a friend tried to arrange for her to visit a Moscow clinic, Kunyakina said she was denied an appointment “for political reasons.”

Local and regional officials have lost much of their authority under Putin’s “power vertical”-style of governance, which gives central control to federal authorities over many regulatory issues.

Regional environmental officials also say they are helpless against the private businesses that run the landfills, whose ownership is often murky. Authorities say these operators have powerful patrons who protect them from allegations of mismanagement, or they cannot be closed because of a shortage of dumpsites.

Activists focus their anger at Moscow, which finds it cheaper to dump the waste than separate and recycle it.

While the amount of trash generated in the capital has been rising slowly, the region as a whole saw an increase of 41 percent for 2016, according to a government report. That year, the last for which statistics are available, the city produced 4.6 million tons, with an additional 3 million tons from the surrounding region.

Regional and city officials announced a task force to coordinate waste management and plans to open 11 sorting and recycling facilities as well as several incinerators. Activists say the plans are vague and don’t address the core problem of recycling in Moscow.

The city signed long-term deals with private companies in 2013-15. The biggest, for about $694 million, went to Khartiya, whose majority owner is Igor Chaika, the 29-year-old son of Prosecutor General Yuri Chaika.

A $198 million contract went to Spetstrans, co-owned through a number of subsidiaries by the state conglomerate Rostec headed by Sergei Chemezov, Putin’s longtime friend and fellow former KGB officer in East Germany.

This spring, the regional government also signed long-term deals with Rostec’s RT-Invest, winning three contracts worth a total of $1.7 billion, while Khartiya got a contract worth about $565 million.

The contracts oblige the companies to separate 20 percent of the waste for recycling, while other cities boast of separating 80 percent, according to environmental experts.

Lyubov Sobol, who investigated the deals for the Foundation for Fighting Corruption, alleged that “these were not random companies who just happened to win those contracts.”

Moscow city officials did not respond to repeated requests for comment.

Greenpeace’s Kiselyov said the contracts are violated every day, over trash separation.

“Did Moscow become hostage of these contracts? Probably, yes.”

Putin, whose personal intervention a year ago seemed to worsen the landfill crisis, addressed the issue in his latest call-in show June 7. He referred to it as a legacy of the Soviet Union, saying hundreds of illegal, unregulated landfills don’t pay taxes.

“This is an absolutely unacceptable practice. Part of this activity is criminalized,” he said.