In Mexico, longtime foes ‘AMLO’ and elite getting pragmatic 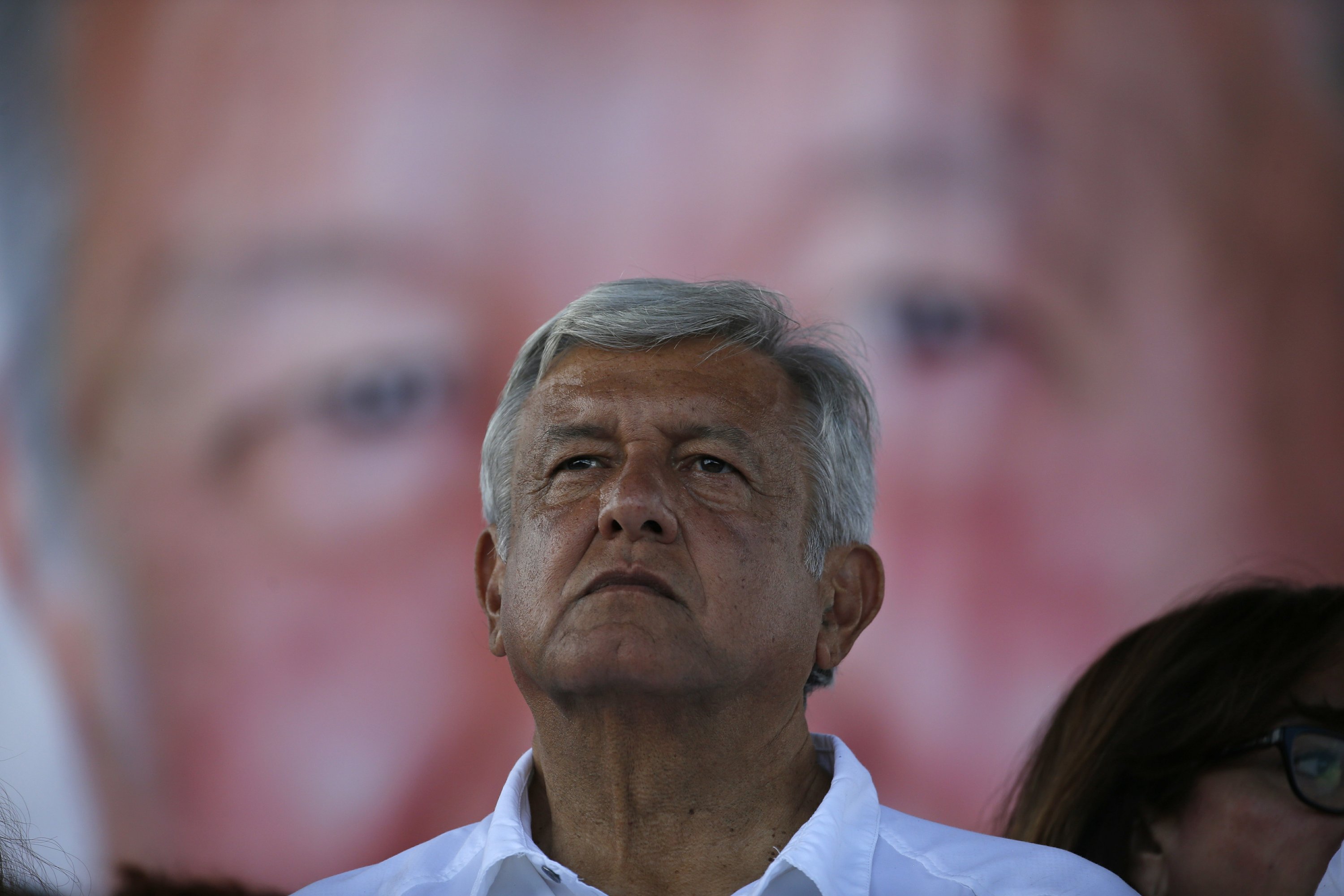 MEXICO CITY — On the campaign trail, presidential front-runner Andres Manuel Lopez Obrador has railed against a corrupt and “rapacious minority” of business executives who oppose him because they know they will have to “stop stealing” if he wins the July 1 election.

Executives have fired back with newspaper ads charging the leftist politician, who is making his third run for the presidency, is a populist demagogue who would set Mexico back decades by returning it to a time of heavy-handed state intervention.

Now the two sides, by all appearances, have sat down and talked it out.

After more than a decade of mutual recriminations, Mexico’s wealthy elite and Lopez Obrador have lately reached something resembling an uneasy truce. It’s not that they have reconciled their differences, but rather it’s the result of pragmatic calculation by both sides.

Business leaders have come to realize they would need to work with Lopez Obrador as the final arbiter of regulations and policy-making. The candidate knows he would need investment to continue so there’s no economic instability or boycotting of his projects.

“I think it’s increasingly inevitable to a lot of people in the business community that they are going to have to make peace with a Lopez Obrador administration, and it’s becoming equally obvious to Lopez Obrador that he’s going to have to govern and make deals with people that he hadn’t originally reached out to,” said Andrew Selee, a longtime Mexico analyst and author of “Vanishing Frontiers,” a book about Mexico and the United States.

“So there is a bit of a coming together. It’s a detente, I think. At this point it might be a bit much to say it’s a peace,” Selee added. “That doesn’t mean there’s an alliance, but there’s at least a recognition that they need to be talking with each other.”

Lopez Obrador has led opinion polls since the beginning of the campaign, and some recent surveys give him a 2-1 advantage over his nearest rival, conservative Ricardo Anaya, a natural ally of the country’s wealthy, and an even wider lead over Jose Antonio Meade of the ruling Institutional Revolutionary Party.

While some business leaders have been in Lopez Obrador’s camp for a long time, a June sit-down with members of the Mexican Business Council — the same group he called the “rapacious minority” — marked an extraordinary change of tone after the group published a two-page newspaper ad warning against unnamed politicians who would “divide” the country and cause “resentment.”

“The doubts were cleared up, the rough edges were sanded and a commitment was established to work together,” Lopez Obrador said afterward.

Juan Pablo Castanon, former president of the Mexican Employers’ Confederation, an umbrella organization for more than 30,000 private businesses, described it as a “good encounter.” He came out talking about issues that form the core of Lopez Obrador’s platform — poverty and corruption — and suggested they could work together despite differences.

“We have seen how gradually (his) positions have been migrating toward ones much more open to dialogue,” the confederation’s current president, Gustavo de Hoyos, said later.

“All candidates who arrive in elected office, from the president of the republic to the mayor of the country’s most obscure town, will need the private sector,” de Hoyos said. “They can have no doubt about that.”

Widely popular among Mexico’s poor and working classes, Lopez Obrador, who was Mexico City mayor from 2000 to 2005, has long been viewed with suspicion and fear by the many in the elite — a class that has had tight historic connections with the ruling political parties that Lopez Obrador has lambasted as corrupt.

When he first ran for president in 2006 on promises to “put the poor first,” opponents likened him to then-President Hugo Chavez of Venezuela and launched a campaign branding him “a danger for Mexico.” Fierce opposition from business groups may have cost him an election decided by a razor-thin margin.

His second run in 2012 saw Lopez Obrador moderate his proposals somewhat, but once again he came in second.

This time he has sought to be even more cautious, though at the beginning he did not hold back from attacking his critics.

Lopez Obrador announced he would review and possibly reverse business-friendly reforms pushed by current President Enrique Pena Nieto. Those include an education overhaul to professionalize a teaching class long dominated by powerful and often corrupt union leaders and an energy reform allowing private investment in the oil industry after years of decline at state-run energy giant Pemex.

Lopez Obrador also has alarmed investors by saying he would scuttle a multibillion-dollar airport project on the capital’s outskirts, drawing the ire of the likes of Carlos Slim, one of the world’s richest men and a partner in the construction of the new terminal.

More recently, though, the candidate softened his stance, saying it’s not necessary to scrap the airport and suggesting instead that it be built entirely with private capital.

He has surrounded himself with economists with mainstream credentials such as Gerardo Esquivel, a Harvard PhD who has consulted for the United Nations and the World Bank. Esquivel is one of those tasked with easing fears among the entrepreneurial class.

“What is being proposed is to seek a better-adjusted balance between the activities of the state and the market,” Esquivel said. “What we learned in these years is that the retreat of the state from economic activity and leaving everything to the market caused mediocre economic growth and poverty.”

Lopez Obrador promises there will be no expropriations or nationalizations, and says reviews of contracts under the energy reform would seek only to guarantee they were not won through corruption.

Prominent historian Enrique Krauze, who in 2006 wrote a scathing essay that labeled Lopez Obrador a “tropical messiah,” appears resigned to a Lopez Obrador presidency and of late seems more concerned with ensuring other institutions can rein in his more radical instincts.

“Let us vote for the presidential candidate who convinces us, but let us take care that the next president does not have a majority in Congress,” Krauze said in a video released last week. “Congress is the principal dam of containment to limit the absolute power of a president.”

So far Lopez Obrador’s huge lead hasn’t led to a major market loss or precipitous decline of the peso, though the currency has slumped over other concerns, notably contentious trade negotiations and tariff disputes with the U.S., Mexico’s chief trading partner.

Alfredo Coutino, Latin America director for Moody’s Analytics, said the relative stability suggests markets have already baked in the possibility of a Lopez Obrador presidency and are betting that market and institutional counterweights will check his power.

“If he were seen as a real threat,” Coutino said, “I think the markets would be moving very strongly and we would be seeing investment decisions postponed or withdrawn.”