House GOP gets little direction from Trump on immigration 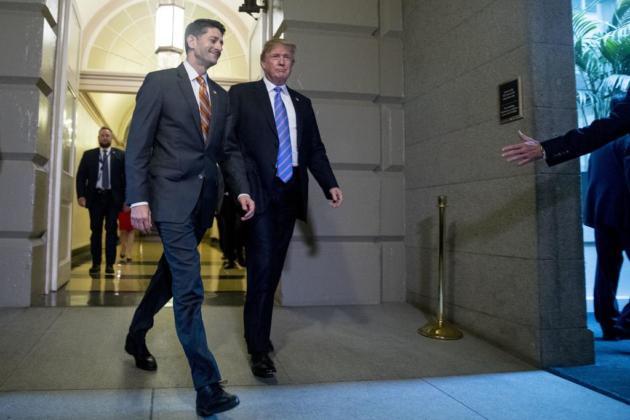 WASHINGTON — President Donald Trump told House Republicans he is “1,000 percent” behind their rival immigration bills, providing little clear direction for party leaders searching for a way to defuse the escalating controversy over family separations at the southern border.

And it’s uncertain if Trump’s support will be enough to push any legislation through the divided GOP majority.

GOP lawmakers, increasingly fearful of a voter backlash in November, met with Trump for about an hour Tuesday at the Capitol to try to find a solution that both holds to Trump’s hard-line immigration policy and ends the practice of taking migrant children from parents charged with entering the country illegally. Many lawmakers say Trump could simply reverse the administration’s “zero tolerance” policy and keep families together.

While Trump held firm to his tough immigration stance in an earlier appearance Tuesday, he acknowledged during the closed-door meeting that the coverage of family separations is taking a toll. Trump said his daughter, Ivanka, had told him the situation with the families looks bad, one lawmaker said.

“He said, ‘Politically, this is bad,'” said Rep. Randy Weber, R-Texas. “It’s not about the politics, this is the right thing to do.” 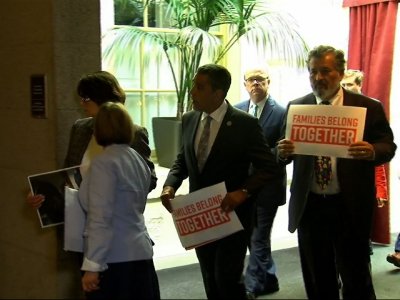 But Trump touched on many topics during the meeting, including his historic meeting with the North Korean Kim Jong Un. He praised a few GOP lawmakers by name for defending him on TV, according to one Republican in the room. And he took a jab at Rep. Mark Sanford, congratulating the South Carolina Republican on his recent campaign, according to others granted anonymity to discuss the private meeting. Sanford, a frequent Trump critic, lost after his GOP primary opponent highlighted his criticism of the president.

As Trump walked out of the session in the Capitol basement, he was confronted by about a half-dozen House Democrats, who yelled, “Stop separating our families!”

Leaders in both the House and Senate are struggling to shield the party’s lawmakers from the public outcry over images of children taken from migrant parents and held in cages at the border. But they are running up against Trump’s shifting views on specifics and his determination, according to advisers, not to look soft on his signature immigration issue, the border wall.

Rep. Kristi Noem, R-S.D., said Trump told lawmakers he “would continue to support the legislation, and that people shouldn’t be worried that he would change his mind.” She said it was a light moment. “Everybody laughed.”

Even if Republicans manage to pass an immigration bill through the House, which is a tall order, the fight is all but certain to fizzle in the Senate.

Sen. Chuck Schumer, the Democratic leader from New York, is adamant that Trump can end the family separations on his own and that legislation is not needed.

Schumer said with most Americans against family separations, it’s Republicans “feeling the heat on this issue, and that’s why they’re squirming.”

In the House, GOP leaders scrambled Tuesday to produce a revised version of the broader immigration bill that would keep children in detention longer than now permitted — but with their parents.

The major change unveiled Tuesday would loosen rules that now limit the amount of time minors can be held to 20 days, according to a GOP source familiar with the measure. Instead, the children could be detained indefinitely with their parents.

The revision would also give the Department of Homeland Security the authority to use $7 billion in border technology funding to pay for family detention centers, said the person, who was not authorized to discuss the matter by name and commented only on condition of anonymity.

In the Senate, meanwhile, Republicans are rallying behind a different approach. Theirs is narrow legislation proposed by Sen. Ted Cruz, R-Texas, that would allow detained families to stay together in custody while expediting their hearings and possible deportation proceedings.

Cruz’s bill would double the number of federal immigration judges, authorize new temporary shelters to house migrant families and limit the processing of asylum cases to no more than 14 days — a goal immigrant advocates say would be difficult to meet.

“While cases are pending, families should stay together,” tweeted Cruz, who is in an unexpectedly tough re-election battle.

The family separation issue boiled over Tuesday at a House hearing on an unrelated subject, when protesters with babies briefly shut down proceedings.

Maryland Rep. Elijah Cummings, the top Democrat on the House Oversight and Government Reform Committee, pleaded with Republicans on the panel to “stand up” to Trump.

Under the administration’s current policy, all unlawful crossings are referred for prosecution — a process that moves adults to the custody of the U.S. Marshals Service and sends many children to facilities run by the Department of Health and Human Services. Under the Obama administration, such families were usually referred for civil deportation proceedings, not requiring separation.

More than 2,300 minors were separated from their families at the border from May 5 through June 9, according to the Department of Homeland Security.

The national outcry has roiled midterm election campaigns, emboldening Democrats while putting Republicans on the defensive.

Top conservatives, including key Trump allies, have introduced bills to keep the migrant families together. Rep. Mark Meadows of North Carolina, a leader of the conservative Freedom Caucus, said he has introduced a measure that “becomes a backup proposal” if others fail.

The House is to vote later this week on two bills that address broader immigration issues to protect young immigrant “Dreamers,” who have been living in the U.S. illegally since childhood, from deportation and fund Trump’s border wall.

But outlook for passage is dim. One conservative measure is expected to fail. And it’s unclear if Trump’s backing will help the compromise legislation that GOP leaders negotiated with moderate Republicans. Rep. Steve Scalise of Lousiana, the GOP whip, told reporters he thought it had enough support to pass. Votes are expected Thursday.

Rep. Scott Perry, R-Pa.,a member of the House Freedom Caucus, says he doesn’t like compromise bill “because it’s all compromising in one direction.”

Perry was not at the meeting with Trump, but said he doubts the president’s words will affect his position.

“Well, good for him, but he’s not running for Congress.”