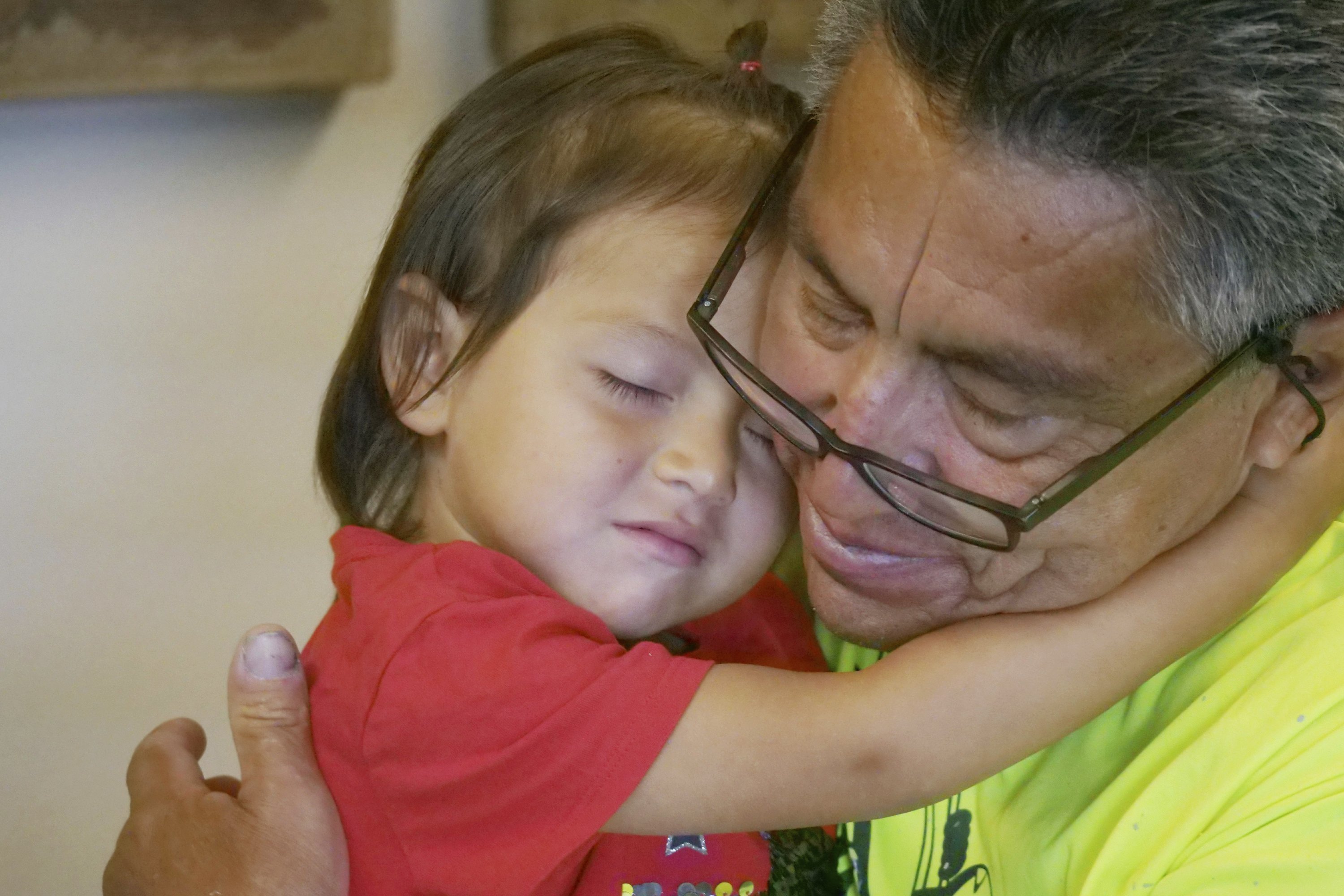 PROVO, Utah — Three-year-old Genesis Gonzalez Lopez giggled excitedly as she played with her father at a sunny Utah park, zipping down a slide again and again into his arms.

The scene this week in Provo, south of Salt Lake City, was a far cry from what the pair experienced on Thanksgiving, when U.S. immigration authorities took Romulo Gonzalez Rodriguez into custody at the U.S.-Mexico border and whisked away the frightened girl, with no explanation of where she’d end up.

Gonzalez had fled Guatemala with the then-2-year-old after kidnappers held him captive, ripped out his right eye and forced his family to pay a $13,500 ransom for his life. He traveled by bus and train to a San Diego port of entry to seek asylum in the United States and was separated from his daughter for seven days.

“It’s painful to be running away and come to where you think they’re going to rescue you, and they take the measure of separating children,” the father told The Associated Press in Spanish on Tuesday. “You fall again into fear and the same anguish that you’re leaving behind.”

Gonzalez’s experience offers a window into the distress and uncertainty parents endure when they are separated from their children at the border, even though it happened before President Donald Trump’s administration in April adopted a “zero tolerance” policy in which all unlawful border crossings are referred for prosecution.

The policy — designed to curb a wave of Central American migrants who say they are fleeing violence at home — has led to a spike in family separations in recent weeks, provoking a national uproar. President Donald Trump said Wednesday he would be signing an executive order that will end the practice.

In Gonzalez’s case, it’s unclear why he and his daughter were separated since he surrendered at the border and is not being prosecuted for illegal entry.

It has been longstanding practice for Homeland Security to separate adults and minors at the border when it’s unable to confirm they’re related or if it believes a child is at risk. But Gonzalez has no record criminal record, his attorney Mari Alvarado Tsosie said.

Gonzalez has a brother in Provo who sought Alvarado’s advice after Gonzalez was held for ransom in his home country. Gonzalez followed her instructions, arriving at the San Ysidro Port of Entry with his daughter Nov. 23 and handing U.S. immigration authorities a Guatemalan police report about his kidnapping.

Authorities shepherded his young daughter into another room while Gonzalez answered questions. He thought they would be reunited when he was done, but he was instead taken to a detention center without his daughter, Alvarado said. When he asked where she was, they wouldn’t tell him, he said.

Gonzalez said he then spent seven days at a cold facility where the lights never turned off, wondering if his daughter was safe and if he would ever see her again. In Guatemala, his kidnappers had threated to dismember the child, and he suspected corrupt authorities were involved. His mind raced with worries U.S. law enforcement was corrupt too.

“It’s tremendous anguish because you don’t get any answers from authorities,” Gonzalez said at his attorney’s office in Provo, his daughter sitting on his lap. “They don’t give you information, and you don’t know the laws. … You’re wondering: Where is she? What is she doing? Such a small child.”

Parents who surrender at U.S. ports of entry have occasionally been separated from their children with no formal explanation since long before the Trump administration’s zero tolerance policy, said Dan Kowalski, editor of Bender’s Immigration Bulletin, a national journal focused on immigration cases and law. He believes it’s because of a lack of training, leadership and standard operating procedures that allows border agents to make up rules as they go.

If they suspected Gonzalez was abusing the child or trafficking her, they would have sent the case to prosecutors, Kowalski said.

A spokesman with U.S. Immigration and Customs Enforcement had no immediate comment on the case.

After learning of Gonzalez’s situation, Alvarado began calling every ICE facility in Southern California looking for him and the child. It took her three days to find Gonzalez at San Diego’s Otay Mesa Detention Center and another four days to reunite him with his daughter.

To this day, Alvarado doesn’t know where Genesis was held, though she believes the girl was somewhere in San Diego. All the girl has said is that she ate a lot of cereal.

The father and daughter are staying with Gonzalez’s brother while they await word on the asylum request. A hearing is set for Oct. 22 at a Salt Lake City immigration court.

Gonzalez’s wife and two step-children are in hiding in Guatemala and waiting until he can send enough money for them to make the journey north.

Genesis is too young to say what happened to her while they were apart or express how it affected her. But her father said she was sickly when they reunited, and seems nervous and clingier now. She starts therapy later this month.

On Tuesday, Genesis looked like a typical, sweet toddler, hugging her father tightly and giving him kisses while he spoke.

Gonzalez is happy to be safe for now but said he’s living in limbo not knowing if he’ll be forced to return to the Guatemalan beach town that he once loved, where he now fears he’ll be killed if he returns. Between the kidnapping and the separation from Genesis, Gonzalez said he suffered significant trauma of his own that he has yet to deal with.

“It’s a situation I don’t wish upon any father or human being,” he said. “It affects you a lot psychologically, emotionally. There are moments when I remember it all, and I start to cry for no reason.”