The Latest: ACC leads the way with 6 first-round draft picks 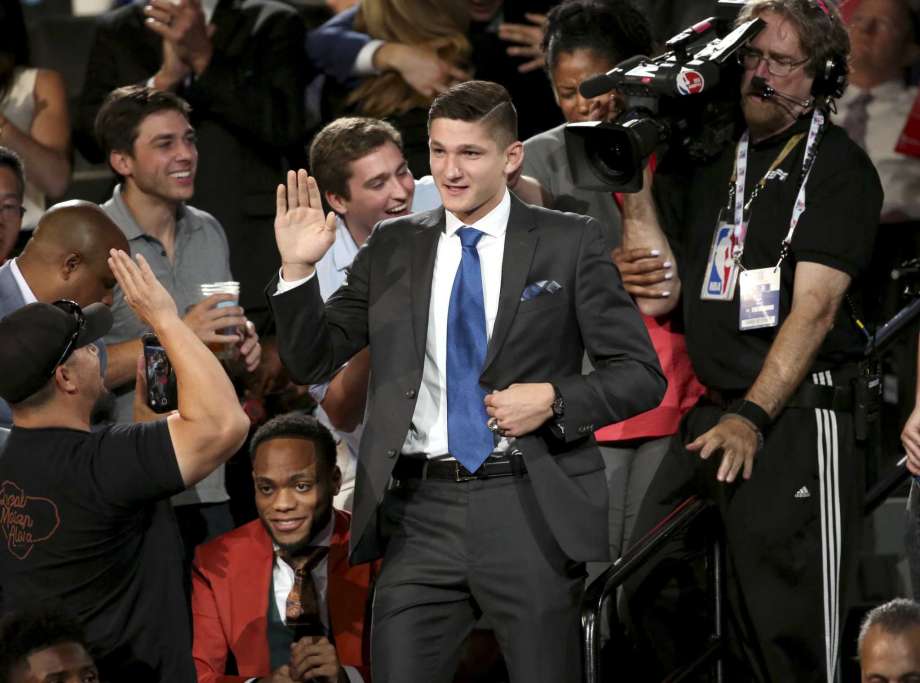 The Atlantic Coast Conference, which tied its record with nine NCAA Tournament teams earlier this year, had the most players selected in the first round of the NBA draft: six players.

After setting a league record with eight NCAA teams, the Southeastern Conference ranked second again with five first-round picks — but only two from Kentucky. The SEC also tied its own mark with four lottery picks for the second time in four years for the league.

The Big 12 fell far short of matching its seven NCAA berths with only three first-round picks. But the Pac 12, which had Arizona’s Deandre Ayton taken No. 1 overall, matched its three NCAA teams with three draft picks.

And Villanova, the defending national champ, helped the Big East top its two No. 1 seeds. Three Wildcats wound up drafted among the first 30 picks.

Michael Porter Jr. insists that he’s the best player in this draft.

Porter Jr., whose college career at Missouri was all of three games because of back surgery, fell to the very last lottery spot in Thursday night’s draft. The Denver Nuggets decided Porter Jr. was worth the gamble, taking him with the No. 14 selection.

Porter played just 53 minutes in college and cancelled a workout in recent days because of what was described as a hip issue.

The freefall is going to cost Porter some money. The top pick in this year’s draft, Deandre Ayton, is guaranteed to make at least $6.7 million. Porter Jr. is only guaranteed $2.4 million.

Before Deandre Ayton was selected by the Phoenix Suns with the first pick of the draft, he had signed a multimillion deal with Puma.

Ayton, one of three players in this class who made the choice to go with Puma over bigger brands such as Nike and Adidas, says it was an easy and personal decision for him.

He says, “In the Bahamas, a lot of people cannot afford Nike or Adidas. Puma is the main brand and it’s very affordable, and growing up around that brand, I’m used to that brand.”

Ayton, who played at Arizona, is from Nassau, Bahamas. The inside of his draft tuxedo not only featured Bahama’s flag but also Nigeria and Jamaica ones. His mom is Jamaican and Bahamian. His dad is Nigerian.

Ayton says he wants to “start my own thing,” adding, “I want to be dominant in my own brand, and I want to have my own signature one day to make it global.”

Luka Doncic won a championship on Tuesday. For Real Madrid. In Spain.

The Slovenian teenager —considered one of the best prospects to come out of Europe— was picked No. 3 overall by the Atlanta Hawks on Thursday night, amid reports that he would quickly be traded to Dallas for the No. 5 pick and a future first-round selection.

The international touch on this draft is already pronounced, with No. 1 pick Deandre Ayton being born in the Bahamas.

Only eight years after playing basketball for the first time, Deandre Ayton is the No. 1 pick in the NBA draft.

The Phoenix Suns made the long-expected move official on Thursday night, taking the Arizona center with the top overall pick. He’s the first Arizona player to go No. 1 in the draft; Mike Bibby was No. 2 in 1998 and Derrick Williams was No. 2 in 2011.

Ayton is just the second player born in the Bahamas to go No. 1, joining Mychal Thompson — the top pick in the 1978 draft by the Portland Trail Blazers.

The 7-foot-1 Ayton, who didn’t start playing basketball until he was 12, averaged 20.1 points and 11.6 rebounds per game in his lone college season. He’s the ninth consecutive one-and-done player to be taken No. 1 overall.

The players in New York who were headed to the Green Room were individually introduced on stage before the draft officially started. They had their names announced, special accolades and where they are from. Parents also got to walk out with their sons.

Members of the Jr. NBA lined up to clap and cheer, creating a walkway for the draft prospects as they went to sit down at their respective tables.

This is the first time NBA has started the draft with an elaborate introduction.

Avery Johnson is back at Barclays Center, home of some turbulent times.

Draft night will be a celebratory one for the Alabama coach, who is seated at the green room table of star Crimson Tide point guard Collin Sexton.

Johnson was the Nets’ coach when they moved to Brooklyn in 2012 but was fired with a 14-14 record early in that first season shortly after they were blown out at home by Boston in a nationally televised Christmas Day game.

He eventually ended up at Alabama and coached here last season when the Crimson Tide played in the Barclays Center Classic. They finished their championship game loss to Minnesota with only three players following ejections after a near brawl. But the game showed how good Sexton was, as he scored 40 points to keep Alabama close in what became an 89-84 loss.

Blue and burgundy appear to be the colors of choice at this year’s draft.

The green room prospects have posed on stage for their traditional class photo and a few, including expected top-five picks Deandre Ayton and Luka Doncic, are sporting traditional navy suits. A couple other players are going with much lighter shades of blue.

Trae Young, standing front and center and holding the ball in the photo, was one of the players in burgundy — and the only one not in slacks. He is wearing suit shorts, similar to what LeBron James wore to a couple NBA Finals games and Draymond Green donned for last year’s NBA Awards.

Even on NBA draft night, some people in Philadelphia are already thinking about free agency and the pursuit of LeBron James.

A plane is flying above Barclays Center carrying three banners. One has James’ No. 23 with a crown and the Liberty Bell, another urges him to “Strive for GOATNESS” and the last reads #PHILLYWANTSLEBRON.

Draft night had been the highlight of the 76ers’ year in their recent tanking seasons and large number of their fans made the short trip to Brooklyn to see who they would select with their high picks. But now the 76ers have moved from process to playoffs and are in position to add a major free agent to their core of Joel Embiid and Ben Simmons.

Power Home Remodeling, a Philadelphia-based company, has become a James recruiter, originally setting up three billboards in Cleveland urging him to come to the city. The company also flew Thursday’s billboards in Brooklyn.

It could be a big night for big men in the NBA draft.

The Phoenix Suns have the No. 1 pick for the first time in franchise history and are expected to take the 7-foot-1 Ayton. They are followed by Sacramento, Atlanta, Memphis and Dallas.

Ayton, a native of the Bahamas, and Bagley were high school teammates for one season at Hillcrest Prep in Arizona.

There has been less emphasis on traditional centers in the NBA in recent years, but most of the top big-men prospects are versatile enough to play outside as well, making this the first time since 2007 that six players 6-10 or taller could go in the top 10.