The Latest: Plan for kids on military bases raises concerns 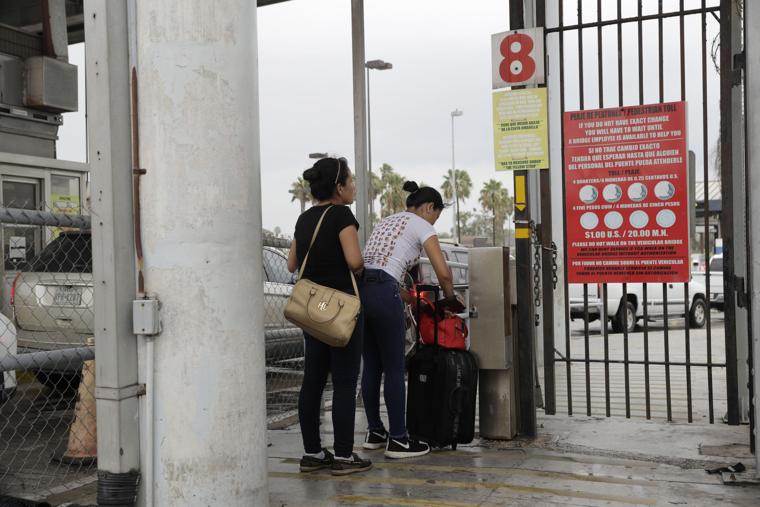 McALLEN, Texas — The Latest on the separation of immigrant children from their parents following President Donald Trump’s order allowing them to remain with their parents (all times local):

The prospect of the U.S. government housing up to 20,000 migrant children on military bases has raised questions on Capitol Hill.

Sen. Chuck Schumer said Thursday that he wants to know how many children are already being held after illegally crossing the U.S.-Mexico border and in what conditions.

A defense official says the Department Health and Human Services asked for the space and the Pentagon agreed. The official had knowledge of the request and spoke on condition of anonymity because the arrangement hasn’t yet been announced.

Schumer asked why reporters haven’t been allowed to tour detention facilities and how the new plan would work. The New York Democrat also wondered how the Trump administration was keeping track of families separated under its “zero tolerance” policy on illegal border crossings. 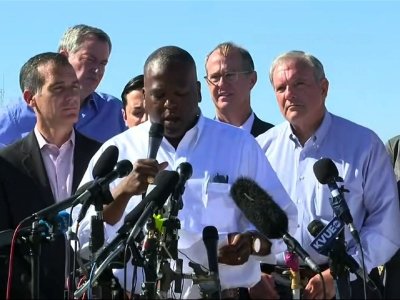 Mayors who gathered at a holding facility for immigrant children at the Texas border say President Trump has failed to address a humanitarian crisis of his own making with an executive order to halt the separation of families along the border. (June 21)

A Florida criminal defendant says he’s been working at a Miami-area facility housing dozens of children separated from their families at the U.S.-Mexico border.

The Miami Herald reported that Franky Santos told Miami-Dade Circuit Judge Jeri Cohen this week that his job was “like a day care,” overseeing children ages 12 to 17. He said he wasn’t supposed to discuss it publicly.

Santos faces felony drug possession charges from a 2017 traffic stop where an officer found 20 grams of marijuana. He said the contractor running the facility knew his criminal history.

Cohen said Santos’ hiring was “a disgrace” and urged him to quit. She said people with pending criminal cases shouldn’t be working there.

A defense official says the Pentagon has agreed to provide housing on military bases for up to 20,000 migrant children detained after illegally crossing the U.S.-Mexico border.

The official says the Department Health and Human Services asked for the space and the Pentagon agreed to support it. The official had knowledge of the request and spoke on condition of anonymity because the arrangement has not yet been announced.

It’s unclear which military bases would be used to house the children. HHS has assessed four military bases as prospective housing for child migrants.

Mayors who gathered at a holding facility for immigrant children at the Texas border say President Trump has failed to address a humanitarian crisis of his own making with an executive order to halt the separation of families along the border. (June 21)

Washington and more than a half-dozen other states say they plan to sue the Trump administration over a policy that separated immigrant families illegally entering the United States.

Washington Attorney General Bob Ferguson made the announcement Thursday outside a federal prison in the city of SeaTac, south of Seattle, where about 200 immigration detainees have been transferred — including women separated from their children.

Ferguson says the separations violate the due process rights of children and their parents and that Trump’s executive order Wednesday halting the practice hasn’t resolved the legal concerns.

First lady Melania Trump boarded a flight to a facility housing migrant children separated from their parents wearing a jacket that read “I really don’t care, do u?”

The green hooded spring military jacket has the words written graffiti-style on the back.

When asked what message the first lady’s jacket intended to send, spokeswoman Stephanie Grisham said: “It’s a jacket. There was no hidden message.”

Mrs. Trump wore a different pale yellow jacket when the plane landed in McAllen, Texas, for a visit to the Upbring New Hope Children’s Center, which houses 55 migrant children.

The Justice Department has agreed to release a child separated from his migrant mother after she sued in federal court.

Justice Department lawyer Sarah Fabian told U.S. District Court Judge Paul L. Friedman at a hearing Thursday that the child would be released in the afternoon.

The mother is Beata Mariana de Jesus Mejia-Mejia. She filed for political asylum after crossing the border with her 7-year old son Darwin following a trek from Guatemala.

Mother and son will be reunited in the Washington area before traveling to Texas, where they will live while her asylum claim is being decided.

The Justice Department has formally asked a federal judge to change the rules on detaining families caught at the border.

Lawyers on Thursday filed a memorandum to a class-settlement that governs how children are handled when they are caught crossing the U.S. border illegally.

The Flores settlement states that families cannot be detained longer than 20 days.

The move is aimed at stopping the separation of children from their families amid a new policy where anyone caught crossing the border is charged criminally.

President Donald Trump signed an order Wednesday stopping the practice that has resulted in the separation of more than 2,300 children from their families. Homeland Security officials will detain families together.

It’s not clear what will happen with the children already separated.

Northam announced the probe in a tweet on Thursday, hours after The Associated Press reported on a half-dozen sworn statements from Latino teens held at the Shenandoah Valley Juvenile Center.

Youths as young as 14 say they were beaten while handcuffed and locked up for long periods in solitary confinement, left nude and shivering in concrete cells.

Detainees also say the guards stripped them of their clothes and strapped them to chairs with bags placed over their heads.

The governor, a Democrat, said the allegations are disturbing and ordered the state’s secretary of public safety and homeland security to report back to him about conditions inside the facility.

Melania Trump in a visit to Texas facility got a firsthand look at some of the migrant children sent there by the U.S. government after their families entered the country illegally.

She visited a one-story red brick building, which houses 55 children between the ages of 12 and 17.

With the words, “Welcome! First Lady” written in black marker across the red and white bars, Mrs. Trump also signed the flag, which the children gave to her.

The U.S. Immigration and Customs Enforcement office in Portland has been closed for a second day because of a demonstration against Trump administration immigration policies.

Agency spokeswoman Carissa Cutrell says people who had appointments scheduled for Thursday will be contacted by deportation officers to have their meetings rescheduled. The appointments will not be reported as missed check-ins.

Cutrell declined to say how many people work at the Portland office, or if they have been working from home.

The round-the-clock protest began Sunday, with protesters calling for an end to the Trump administration’s “zero tolerance” policy in which all unlawful border crossings are referred for prosecution.

Portland Mayor Ted Wheeler, a Trump critic, says he does not want city police involved in any effort to end the protest.

A spokeswoman for the Department of Justice says a report is inaccurate that parents who try to illegally cross the border with children will no longer be criminally prosecuted.

Spokeswoman Sarah Isgur Flores says there has been no change to the “zero tolerance” policy that resulted in the separation of more than 2,300 children from their parents.

President Donald Trump on Wednesday signed an order to stop the separations. Justice Department lawyers are working on a legal challenge to allow families to be detained longer than 20 days.

The Washington Post reported that the policy was suspended until U.S. Immigration and Customs Enforcement could find space to detain them.

Mayors who gathered at a holding facility for immigrant children at Texas’ border with Mexico say that President Trump has failed to address a humanitarian crisis of his own making with an executive order to halt the separation minors from families that are detained crossing the U.S. border illegally.

Seattle Mayor and former U.S. attorney Jenny Durkan said Thursday at a news conference on the outskirts of El Paso that immigrant shelters have been overwhelmed by criminal prosecutions ordered by the Trump administration.

She joined about 20 mayors from cities across the country to call for the immediate reunification of immigrant children with their families.

Columbia, South Carolina Mayor Steve Benjamin says a request to tour the holding facility for minors at Tornillo, Texas, was denied by the Department of Health and Human Services.

An official says three immigrant children who have been staying in a Catholic Charities shelter in Fort Worth, Texas, are expected to be reunited with their family Thursday.

Heather Reynolds, the nonprofit’s director, says the three are among 12 immigrant children at the shelter who were separated from their parents under a Trump administration “zero tolerance” policy. She says half are boys and half are girls, and they range in age from age 5 to 12.

Reynolds declined to provide details about the three kids who are expected to be reunited with family Thursday.

She says Present Donald Trump’s executive order Wednesday allowing immigrant kids to remain with their parents mentions how future illegal border crossing will be handled, but it doesn’t address the more than 2,000 children who have already been separated since May. She says this leaves groups like hers “uncertain” about how to manage those kids already in detention in the U.S.

Efren Olivares, a lawyer with the Texas Civil Rights Project, said outside of the federal courthouse in McAllen, Texas, that the 17 immigrants were supposed to have been sentenced Thursday morning for improperly entering the U.S.

Olivares says the 17 will likely be placed in immigration detention, though he didn’t know whether they would be reunited immediately with their children or released altogether. Asked if they had any reaction to the charges against them being dropped, he said, “They’re asking about their children, frankly.”

The Texas Civil Rights Project is interviewing adults to track them and their children through separate government systems.

The dropping of the charges comes a day after President Donald Trump reversed a policy of forcibly separating immigrant children from their parents upon entering the U.S. without permission.