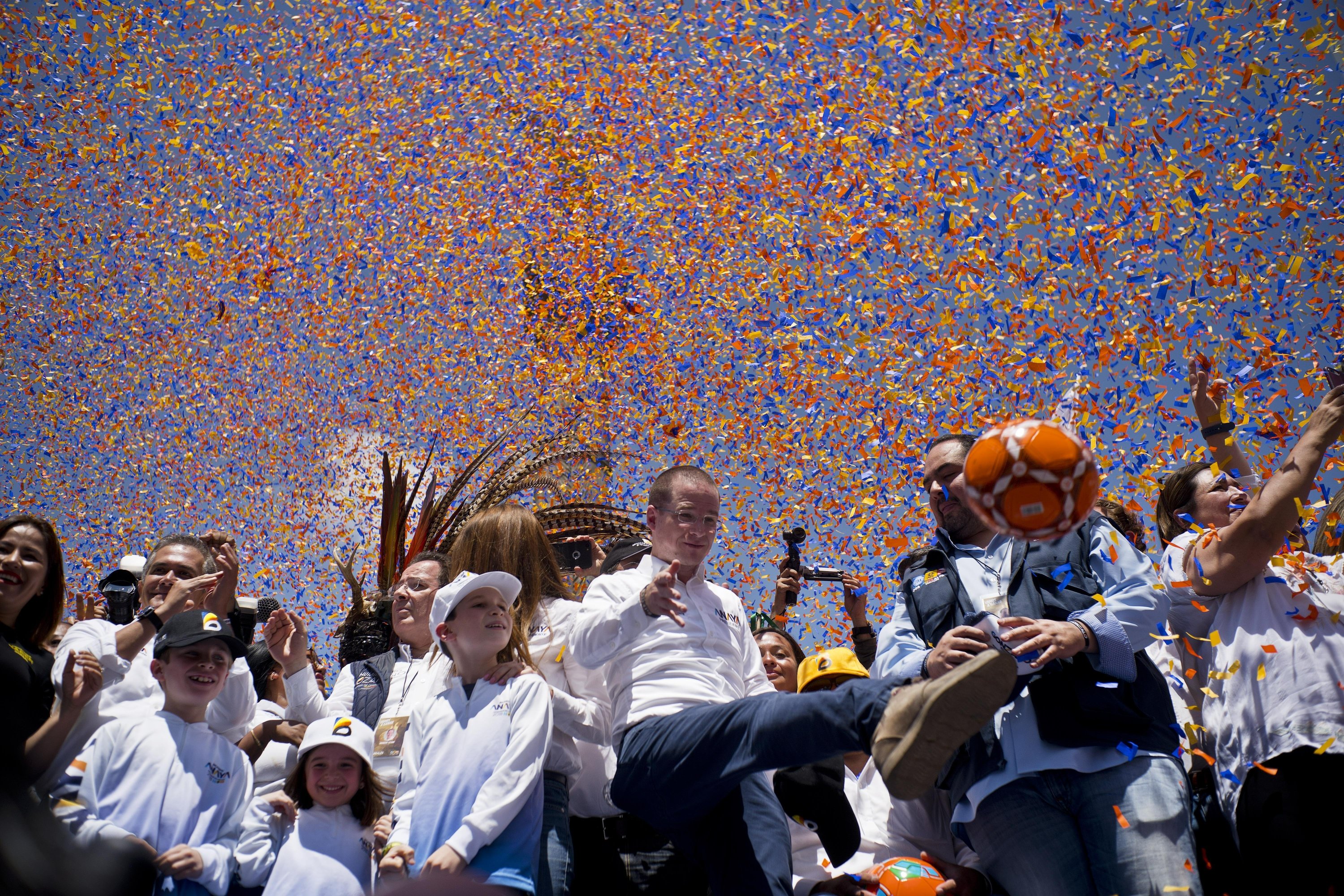 MEXICO CITY — Ricardo Anaya’s supporters see him as a wunderkind — intelligent, eloquent and able to work a stage like a polished TED speaker. Detractors call him a treacherous and calculating politician who used his position to sideline potential party rivals.

At 39, Anaya has already made history as the youngest candidate in Mexico’s modern era to make the presidential ballot. But the conservative standard-bearer of an unlikely right-left coalition is lagging in most polls well behind the populist front-runner, Andres Manuel Lopez Obrador.

Anaya is banking on undecided voters and the so-called “useful vote” to close what many polls say is around a 20-point gap before the July 1 election. The theory is that as election day nears, some supporters of candidates trailing in third and fourth place in the polls make a pragmatic decision to vote for a higher-rated candidate they believe has a better chance of winning.

“I am the only one who can beat Lopez Obrador,” Anaya has hammered home again and again on the campaign trail. “Mexico is going to change.”

Discounting No. 3 Jose Antonio Meade of the governing Institutional Revolutionary Party and the No. 4, independent Jaime “El Bronco” Rodriguez, Anaya has cast the election as a binary choice: A return to the past, symbolized by the leftist Lopez Obrador in his third try at the presidency or a forward-looking future led by a smiling young aficionado of new technologies who cuts a modern figure in his elegant suits and rimless spectacles.

But Lopez Obrador’s candidacy has not generated the same kind of negative reaction as it did during the previous two presidential elections. This time voters seem to be rejecting the Institutional Revolutionary Party, but the biggest beneficiary has not been Anaya, said Jorge Buendia of pollster Buendia y Laredo.

“The ‘useful vote’ has already been exercised in Lopez Obrador’s favor,” Buendia said.

Born in a wealthy Mexico City suburb to a successful architect mother and chemical engineer father, Anaya first entered politics at age 18 as an aide to Francisco Garrido, then-Queretaro city mayor who was elected state governor in 2003.

Fluent in English and French, Anaya became a lawyer and earned a doctorate in political science, and some who knew him as a young man figured he would go far.

Gloria Guevara, his boss during his first federal post as deputy tourism secretary, described him as “very disciplined and very demanding of himself.”

Anaya had no previous exposure in the tourism industry but was a quick study, she said. “He is excellent at learning and someone who executes.”

In February, flanked by his childhood sweetheart turned wife and their three children at the capital’s National Auditorium, he formally accepted the candidacy of his conservative National Action Party along with its erstwhile political foe, the leftist Democratic Revolution Party, and the lesser-known Citizens’ Movement.

Anaya laid out his vision for the country and appeared every bit the 21st century candidate. In a PowerPoint presentation, he proposed to govern by coalition, raise the minimum wage and support women. Anaya also envisioned a cutting-edge solution — blockchain encryption technology — to help fight the age-old problem of corruption.

More broadly, his platform calls for the continued use of the military to fight the war on drug cartels amid rising violence, persuading the United States to contain the flow of weapons south across the border, and a stronger stance against President Donald Trump. He also proposes an independent prosecutor’s office to attack graft, expanded access to the internet and smartphones, and individual stipends as a replacement for social programs that he says are a way to “control the poor.”

Some say Anaya has a message that is modern but fails to connect with many Mexicans.

“He is very prepared, but he should address himself more to the people in the streets,” said Karla Rodriguez, a lawyer affiliated with the Democratic Revolution Party, noting that her party supports abortion and gay rights while the conservative National Action Party has not. “In these elections it’s not about ideology but about pacts” between political parties.

When the incumbent president, Enrique Pena Nieto of the Institutional Revolutionary Party, was elected in 2012, Anaya became a member of Congress under rules that allot seats proportionally for parties.

Anaya rose to the position of speaker, and his childhood nickname of “the match” — for his slender build and close-cropped reddish hair — gave way to a new one: “boy wonder.” He supported Pena Nieto’s overhauls of the education system and the energy industry as well as a three-party pact that allowed their passage by lawmakers.

In the blink of an eye, Anaya became president of National Action. Just as quickly, it seemed, he alienated some in his own party, including former Presidents Vicente Fox and Felipe Calderon, who have declined to support him in the election.

Jorge Guajardo, a former Mexican diplomat and longtime member of the party, said that in 2016 Anaya used state-level campaigns to promote his own image around the country. He also accused Anaya of being “deceitful” and dividing the party, rigging the nomination process in his own favor and driving ex-first lady Margarita Zavala, Calderon’s wife, to make a now-abandoned presidential run as an independent.

“There are times to compete, and times to construct,” Anaya would say later.

There has also been an effort — attributed to Institutional Revolutionary Party interests, but denied by the Meade camp — to tar Anaya.

The federal prosecutor’s office, run by governing party loyalists, released a video purporting to show Anaya and supporters behaving rudely in a visit to the agency. In June, another recording emerged of two businessmen discussing how the candidate allegedly laundered campaign money. There have been other murky claims of alleged graft, but nothing has given rise to any criminal charge.

“They attack me because … I said with all clarity that Enrique Pena Nieto is corrupt and repeated that when I am president I will take charge of ensuring he faces justice and, if found guilty, go to jail,” Anaya responded. “Pena Nieto helps Lopez Obrador by attacking me.”

Anaya is mostly guarded when it comes to discussing his personal life.

Journalist Salvador Camarena wrote in a book about the 2018 candidates that Anaya “practices yoga alone at home and with the help of a video, drinks little, goes out even less and rarely strays from his routines.”

Despite his standing in the polls, Anaya said in recent days that he remains confident of victory for himself and his coalition’s candidates for other offices.

“I do not aspire to be president in order to administer mediocrity,” he said at a rally in the Pacific coast city of Acapulco. “I want to make a profound change.”

Political strategist Antonio Sola, who was the architect of a withering National Action Party campaign to brand Lopez Obrador “a danger for Mexico” in the 2006 campaign but now backs the front-runner, called Anaya “a sound guy, with certain abilities.”

But he also questioned the political maturity of someone who has never competed in a national race or, for that matter, won an election on any level.

“In Mexico it is difficult to be a successful candidate the first time around,” Sola said.