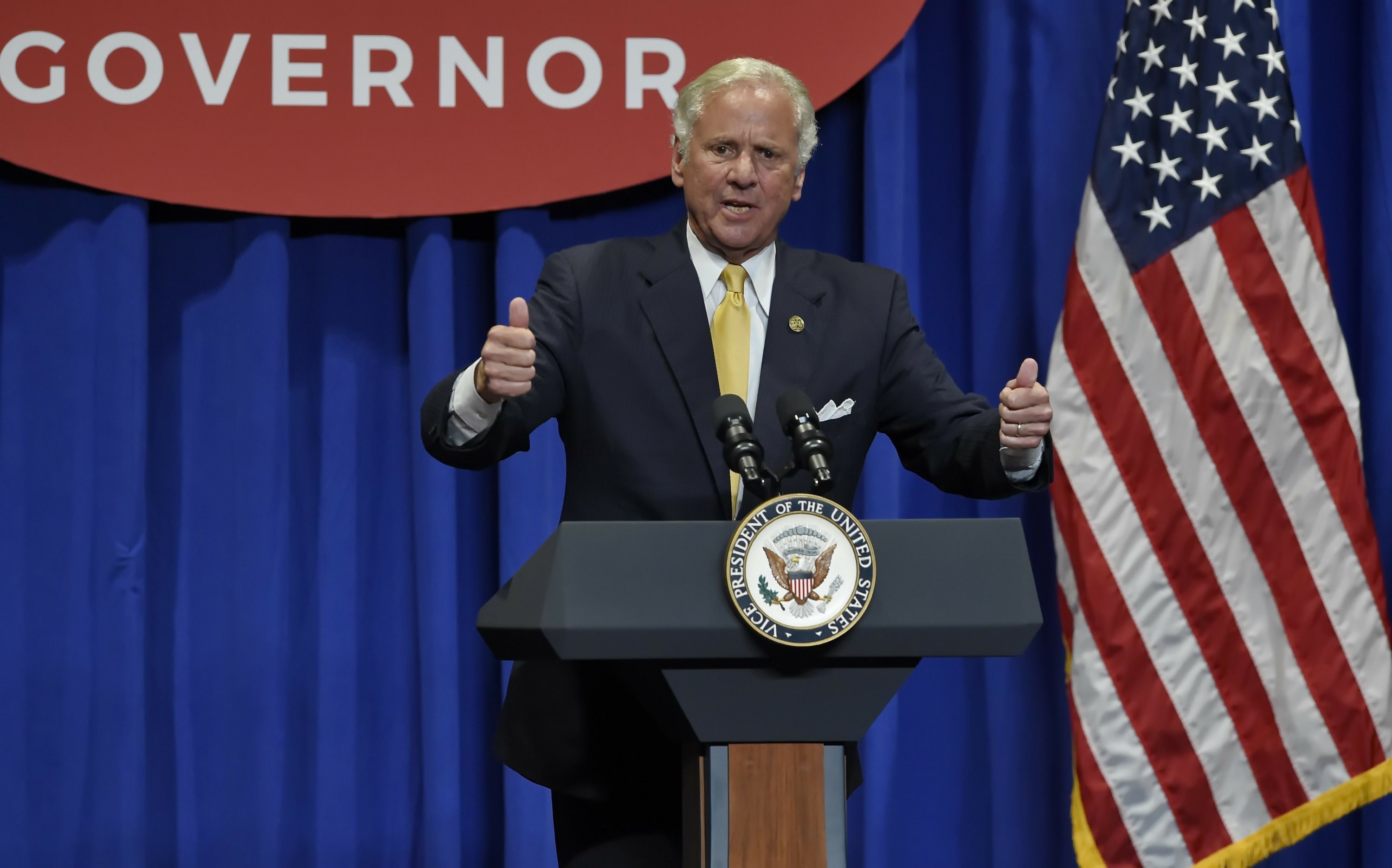 WEST COLUMBIA, S.C. — President Donald Trump is going all-in for a South Carolina governor in a tense runoff election, betting that his last-minute appearance will help make the difference.

Trump was campaigning Monday for Republican Gov. Henry McMaster in West Columbia, returning the favor after McMaster provided Trump with an early endorsement in his presidential campaign. Monday’s rally carries some political risk for the president if McMaster gets tripped up in Tuesday’s primary.

Trump arrived nearly an hour late due to weather conditions. McMaster was among those waiting on the airport tarmac to greet the president.

Vice President Mike Pence joined McMaster at a campaign event on Saturday and the president has deployed his massive Twitter following on McMaster’s behalf in recent days. Trump noted Monday that he was traveling “to one of my favorite places, South Carolina, to fight for one of my original “fighters,” Governor Henry McMaster.”

South Carolina Republican voters are choosing between McMaster and Greenville businessman John Warren in a runoff for the GOP gubernatorial nomination. McMaster received the most votes in a June 12 primary but fell short of the 50 percent needed to win the nomination outright, giving Warren an opening.

Trump, predicting a “red wave” in the fall mid-term elections, has been holding rallies and campaign events on behalf of several Republicans in recent weeks. He staged one of his signature rallies last week to tout congressional candidates in Minnesota and raised money in Las Vegas on Saturday for Nevada Sen. Dean Heller, one of the most endangered Republican senators on the 2018 ballot.

Trump will travel to Fargo, North Dakota, on Wednesday for a rally aimed at bolstering Rep. Kevin Cramer, R-N.D., who is trying to unseat Democratic Sen. Heidi Heitkamp in North Dakota. The trip will also include a campaign fundraising stop in Milwaukee on Thursday.

Wading into Republican primaries has proved risky for Trump. He backed Alabama Sen. Luther Strange over Roy Moore in the state’s Republican primary last year but watched as Moore prevailed despite multiple allegations of sexual misconduct against the former judge. Moore was defeated by Democrat Doug Jones in the special election.

But Trump has been emboldened of late with a flurry of endorsements aimed at Republican loyalists. He successfully intervened in the eleventh hour in a heated South Carolina congressional primary, urging voters to reject Republican Rep. Mark Sanford, a former governor and Trump critic.

McMaster, a former lieutenant governor, became the nation’s first statewide elected official to endorse Trump in January 2016. Trump won a convincing victory in the state’s presidential primary and won the state in November.

McMaster has aligned himself with Trump, defending the president’s handling of immigration and praising Trump’s recent summit with North Korean leader Kim Jong Un. McMaster has tried to make Trump a litmus test, noting that his opponent supported Sen. Ted Cruz of Texas in the 2016 presidential primary.

“Had my opponent had his way, we wouldn’t have had President Trump as president,” McMaster said Sunday on Fox News. McMaster himself initially endorsed South Carolina Sen. Lindsey Graham’s short-lived campaign.

Warren, who served in the Marines and founded a mortgage lending business, has tried to claim the role of political outsider in a state where voters were drawn to Trump’s populist appeal.

“I think that if anyone supported Donald Trump and they look and truly give an honest assessment of whose resume and whose background is more similar to Donald Trump, they will side with me,” Warren told The Associated Press in a recent interview. “It is clear I’m an outsider.”