Texas educators training to shoot back at school shooters 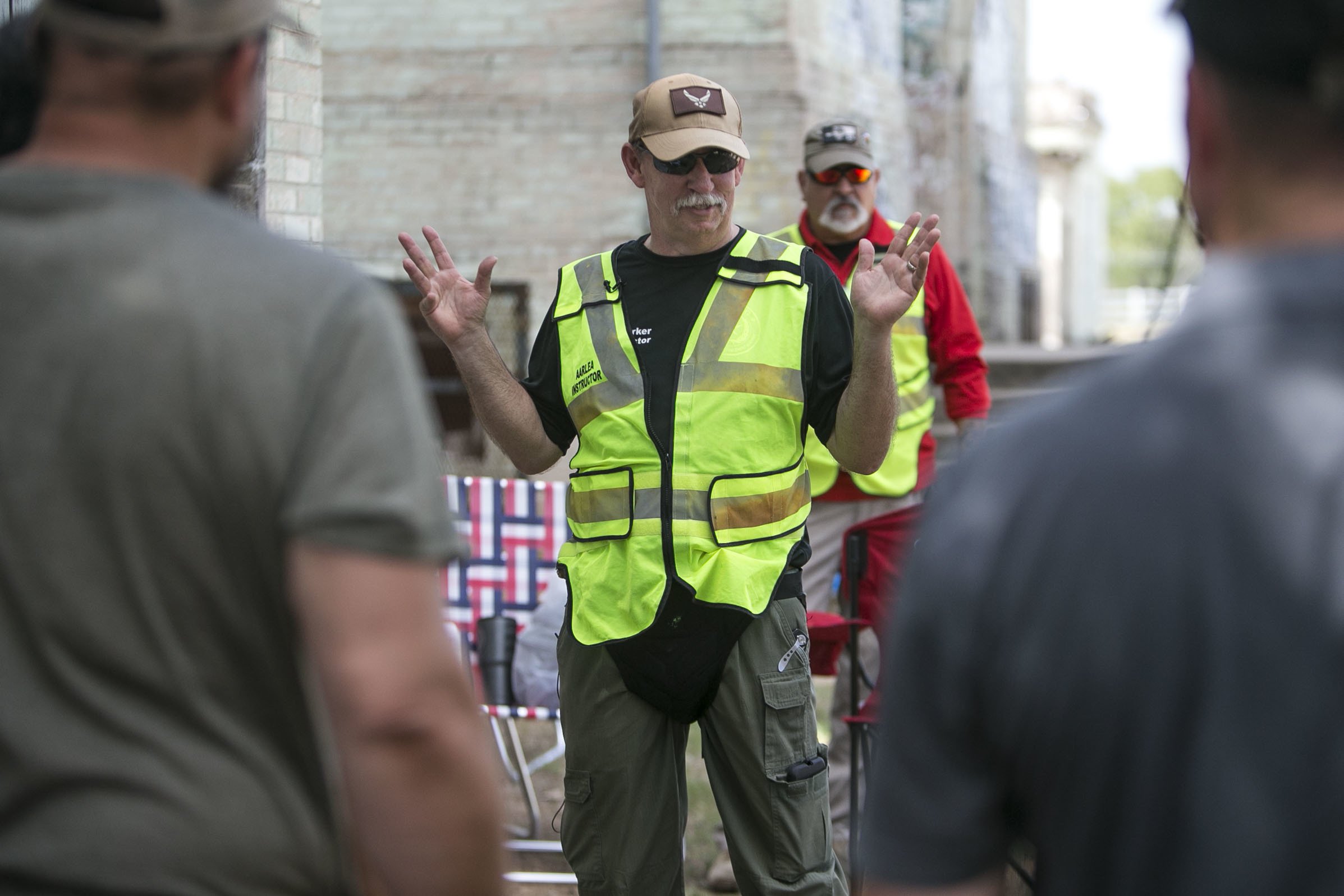 SAN ANTONIO — The man and woman creep down the school hallway back-to-back, guns drawn. A tap on the backside signals they are ready to move into the next room.

He keeps his weapon pointed straight ahead. She scans for dangers that may spring up behind them.

He’s in the room. A roar of gunfire erupts and the sound of the shots and spent shell casings rattling to the floor echo down the hallway. The shooter is down.

On to the next room.

“Drop the gun, drop the gun!” the woman yells as she rushes in. More gunfire erupts.

“Solve the problem!” an instructor yells. “Move outside! … Good.” 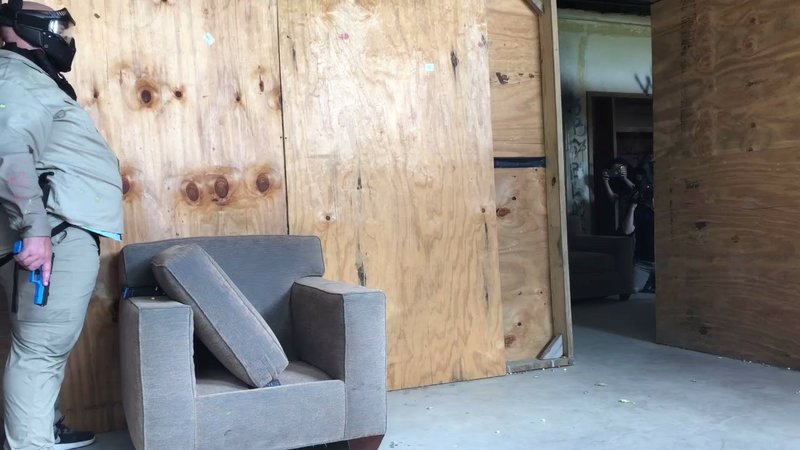 Educators participate in the Texas School Marshal Program to learn how to retaliate against potential school shooters.

The bad guys are dead. Lives are saved. That’s what the Texas School Marshal Program is designed to do: teach school counselors, janitors, teachers, principals and others to react in the event of a shooter, to intervene and hopefully save students.

Texas Gov. Greg Abbott has urged more school districts to participate in the four-year-old Texas program in the wake of recent shootings at high schools in Parkland, Florida, and Santa Fe, Texas.

The number of participating districts has been small, so far, but appears to be ratcheting up after the recent attacks.

Created in response to the Sandy Hook Elementary School shooting in Newtown, Connecticut, in 2012, the program had just 33 certified school marshals across its more than 1,000 public school districts as of last month.

Although the number is supposed to be confidential, Texas Department of Public Safety Commissioner Steve McCraw revealed the total in a hearing with state lawmakers. The Houston Chronicle reported this week that more than 50 districts have been approved to appoint a marshal, with another 40 waiting for the go-ahead from the state.

Friday’s training session in San Antonio with more than a dozen applicants is evidence of growing numbers, even if the program remains small. The Alamo Area Council of Governments Regional Law Enforcement Training Academy, one of three entities in the state that run the training program, had only six applicants in 2016 and had to cancel in 2017 because of a lack of participation, said adjunct instructor and former academy manager Richard Bryan.

The school marshal program is voluntary. Applicants must first be approved by their school districts, pass a psychological exam and receive 80 hours of training, including the live-shooter scenarios like the one that played out Friday.

That exercise was conducted in an old building used for local law enforcement. On Saturday, the group will go to a school campus to run a similar exercise.

The prospect of putting more guns on campus is a divisive one, as some teachers groups and gun-control activists have urged lawmakers not to ask educators to become armed guards.

And mistakes happen. Including the kind that draw warnings from critics that arming school personnel could turn deadly. In Friday’s first practice run, a trainee turned the first corner and “shot” an instructor wearing a yellow vest at point blank range. 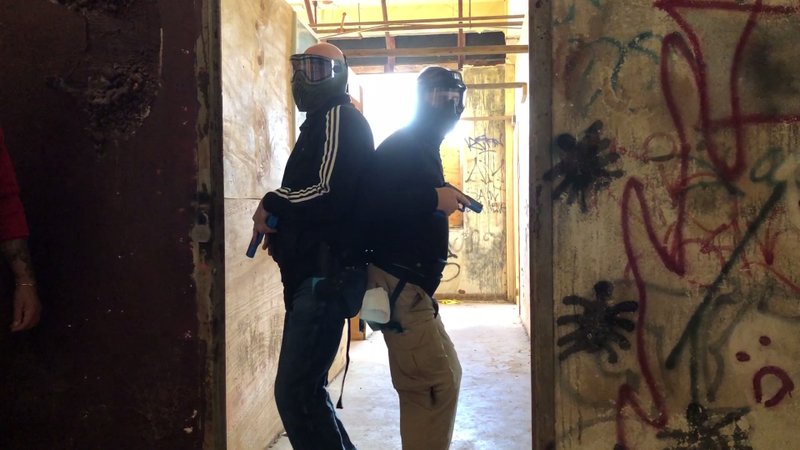 An educator mistakenly “shoots” the instructor during firearms training in the Texas School Marshal Program before continuing the drill.

One trainee, who identified himself as a principal at a Central Texas school, said he’s long been interested in the program and was given the go-ahead by his district in early May, after the Parkland shooting but before the one at Santa Fe. He has no previous military or law enforcement training and his district already had its own police force.

“I’m doing this for the kids,” he said, sweat still pouring down his face 20 minutes after the drill. The principal had two jobs Friday, playing both the role of a marshal hunting a shooter, and acting as the bad guy shooting back.

“I’m not going to hide under a desk,” he said. “If someone is coming after my students, I’m going toward them. It’s like a firefighter. You have to have that mindset that I’m going to put myself in harm’s way to protect somebody else.”

State law requires the identity of trained school marshals to be kept confidential, said Hernan Rozemberg, spokesman for the Alamo Area Council of Governments. Media invited to the watch the training were not allowed to take video or pictures of their faces.

School marshal applicants must already be licensed to carry a handgun. But that’s target shooting. The marshal program requires applicants to feel the stress, the sweat of real-life shooter scenarios where lives will be at stake and the target may kill them.

“The experience of the gunfight is quite different,” Bryan said. “You know you have a bad guy in there and you have to get him before he gets someone else.”

The trainees use simulation weapons and ammunition that mimic a 9mm semiautomatic pistol. The shots produce a loud bang and shell casings fly, but it’s not live bullets.

Sometimes, the shooter fired back. Others times, trainees struggled to quickly reload their weapon.

“I think all of you have been shot at some point,” instructor Dale Marker told the group. “You are making progress.”

“It’s stressful, your heart rate goes up,” said a trainee who described himself as a long-time school administrator from North Texas. “After the first time you get shot, you slow down and the technique starts to kick in.”

No one dies in the training, but it all feels very real, said the principal.

“It’s live for us,” he said, “because it’s life and death when we get to our schools.”