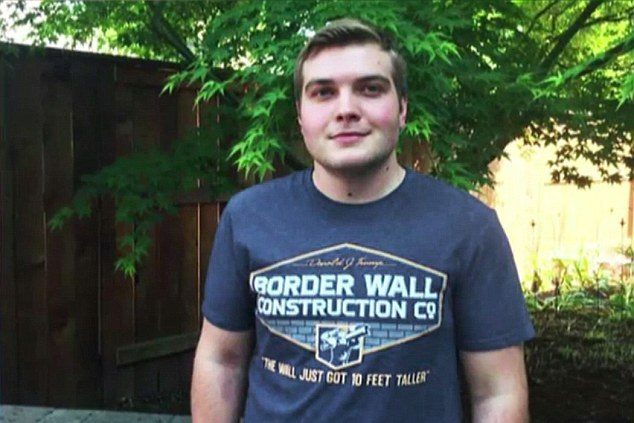 Eighteeen-year-old Addison Barnes of Oregon won $25,000 and a written apology from his principal in a settlement with his school district after he was suspended for wearing a pro-Trump and pro-border wall T-shirt in class, his lawyers announced on Tuesday.

Barnes, then a student at Liberty High School, was asked to cover up his shirt when he wore it to school in January. The shirt read “Donald J. Trump Border Wall Construction Co.,” promoting President Trump’s proposed border wall and included the phrase “The wall just got ten feet higher,” an expression Trump often used on the campaign trail when his wall was criticized.

According to publicly-available court documents, a school official told Barnes that his classmates felt intimidated by the shirt. The official gave Barnes the choice of changing his shirt, covering it up, or being sent home for the day. Barnes chose to go home, which Liberty counted as a suspension.

Barnes filed a lawsuit against the school in May as well as a restraining order which prohibited any school official from censoring his pro-Trump shirt. Barnes received the restraining order from the court, and later settled the lawsuit with the school by receiving his attorney’s fees.

School officials stated they had to balance Barnes’ free speech rights with the feelings of students at the heavily-Latino school, located about 10 miles west of Portland. Some Latino students felt intimidated by the shirt, according to court filings.

Students have the right to wear politically-charged clothing, a right won in 1969 in Tinker v. Des Moines Independent Community School District. A group of students, led by the Tinker siblings, wore black armbands in 1965 to protest against the Vietnam War, but most of whom were suspended when they refused to remove the armbands.

In 2001 and in 2006, federal courts ruled on cases involving students who wore T-shirts; in both cases the shirts expressed pro-heterosexual statements. In the 2001 case in St. Paul, Minnesota, a judge forced a high school to allow a student to wear the shirt in question.

By contrast, in 2006, the 9th Circuit Court of Appeals ruled in a similar case in San Diego County, California, that the shirt was offensive, and thus could be banned. However, the Supreme Court vacated the case the following year, effectively overruling the 9th Circuit.

In 2007, the Supreme Court ruled an inappropriate message could be banned in Morse v. Frederick. A student in Alaska held up a sign that said “BONG HiTS 4 JESUS.” He had been suspended when he brought this sign to a school event.