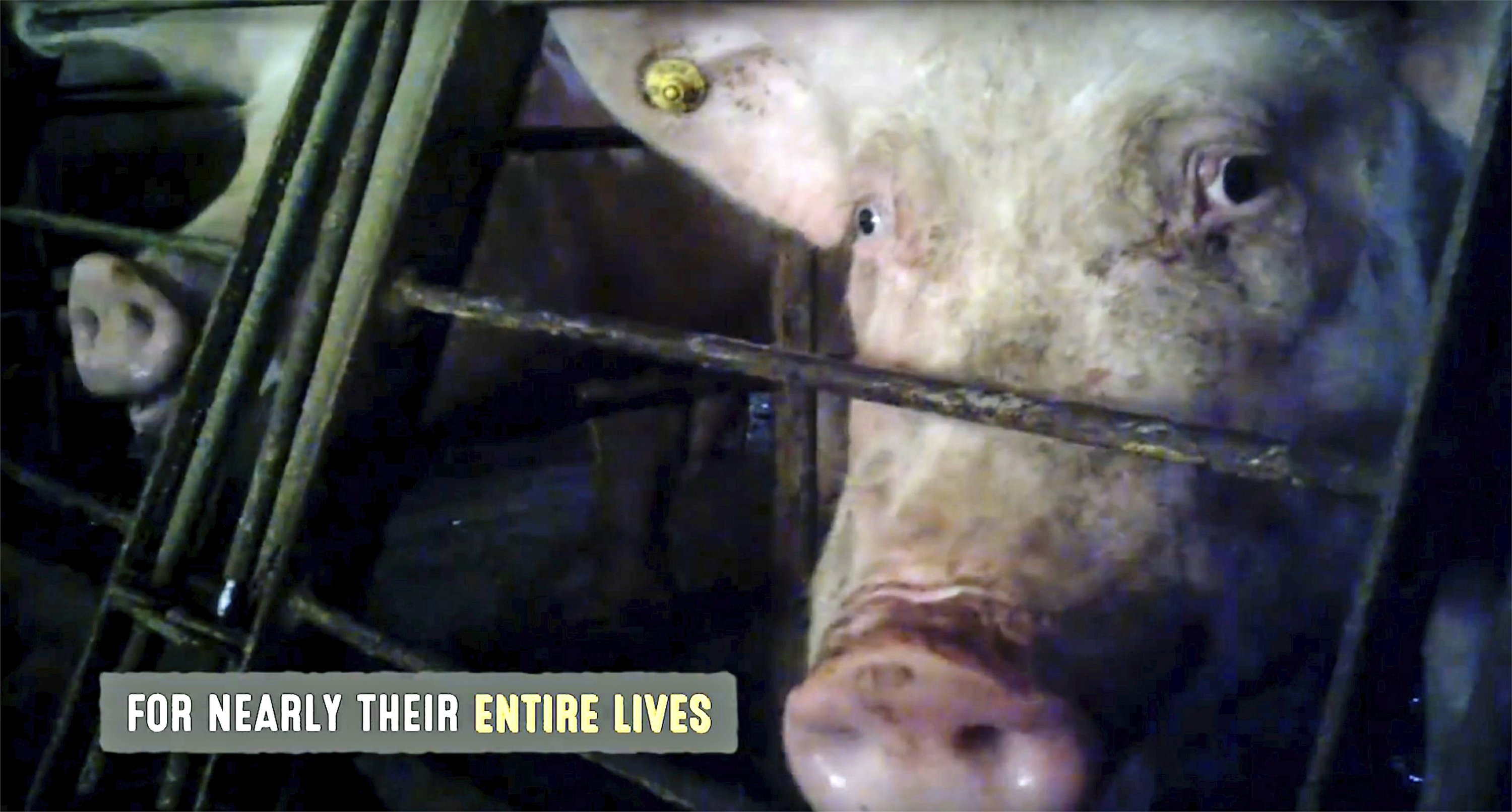 However, the images sandwiched in between — adult pigs in cages barely bigger than their bodies and a piglet squealing while being castrated — show still widely accepted industry practices, but were aimed at pressuring Brazilian-based JBS to abandon them.

Ten states — none major pork producers — have passed laws that ban or phase out the use of those narrow metal cages, known as gestation crates or stalls, where sows are confined during their frequent pregnancies.

Among them is California, where voters agreed to phase out the crates along with chicken cages and veal crates starting in 2015. This fall, voters will be asked to go further and ban the sale of pork from pigs confined to the crates, along with pork from their offspring. The measure also would bar the sale of veal from crated calves and eggs from caged chickens.

Massachusetts voters passed a similar ban in 2016 that takes effect in 2022.

Sows account for only about 6 percent of the pigs on American farms, but pork producers have been slow to give up confinement, said Josh Balk, vice president of farm animal protection for The Humane Society of the United States.

While shoppers are familiar with the bewildering array of cage-free and free-range egg options in stores, how pigs are raised is not something frequently touted on bacon or sausage packages.

Still, activists have made an impact with their gradual, state-by-state approach of passing ballot measures and bills to outlaw crates, and by gathering pledges from more than 100 large restaurant and food companies including McDonald’s, Chipotle and Target, (http://cagefreefuture.com/wp/commitments/) to move away from suppliers that use gestation crates. Some meat producers have also pledged to phase them out.

The world’s largest pork producer, Smithfield Foods, announced in January it had switched to open group housing for pregnant pigs at its company-owned U.S. farms. JBS has said it plans to transition to collective rather than individual crates by 2025. In January, it said 45 percent of its suppliers have already made the switch. https://jbs.com.br/en/imprensa/jbs-avanca-em-ranking-global-de-bem-estar-animal/

JBS’ U.S. branch, based in Greeley, Colorado, suspended shipments from the Franklin, Kentucky, farm after the video was released earlier this month by Los Angeles-based Mercy for Animals, a backer of the California proposal. It said it would investigate the incident at the farm operated by Tennessee-based Tosh Farms.

“Animal welfare is a priority for our company and our customers,” JBS USA said in a statement at the time. “We will ensure that all of our suppliers adhere to our high standards for animal care.”

An estimated 75 percent of U.S. pig farms regularly use gestation stalls. The rest are owned by companies that pledged to cut stall use or are in states that ban it, and mostly use open pens instead, according to the National Pork Producers Council.

However, even most of those farms still use gestation stalls when sows are artificially inseminated, and some use them to test whether the sows are pregnant, council spokesman David Warner said. State bans, like Colorado’s, typically include exceptions for testing, treatment or research.

After sows give birth, farms that use confinement usually put them in slightly larger farrowing stalls, which give them enough room to lie down and nurse their piglets.

Gestation stalls are intended to minimize fighting among hierarchical sows and protect workers from the pregnant animals, which can weigh between 350 and 450 pounds (160 and 200 kilograms), said Sarah Crawford, assistant vice president of animal welfare for the National Pork Board in Des Moines, Iowa. She said the stalls are long enough for the animals to lie in, and research has shown some will choose a stall over living in a group.

“The good thing is farmers have the choice to decide what fits best for their farm,” she said.

Temple Grandin, an animal science professor at Colorado State University and consultant on livestock treatment, said confined pregnant pigs lack the space to turn around, and compared the experience to humans having to spend their lives in an airline seat.

Grandin, who has worked for JBS in the past, said crates should be phased out and has seen group housing for pigs working well. She also said the way male piglets are castrated — done in their first week to prevent aggression and variations in meat flavor — could change too because of new research into pain medication for livestock.

“Gradually, people are realizing that these animals feel pain and we need to give them pain relief,” she said.

Balk of The Humane Society, a major funder of the California proposal, said gestation crates typically are used in places like China and Europe, although the European Union allows sows to be confined for only the first six weeks — or about a third — of their pregnancy.

“Instead, we should set the bar on proper treatment of animals that reflects our mercy and compassion toward animals,” Balk said.