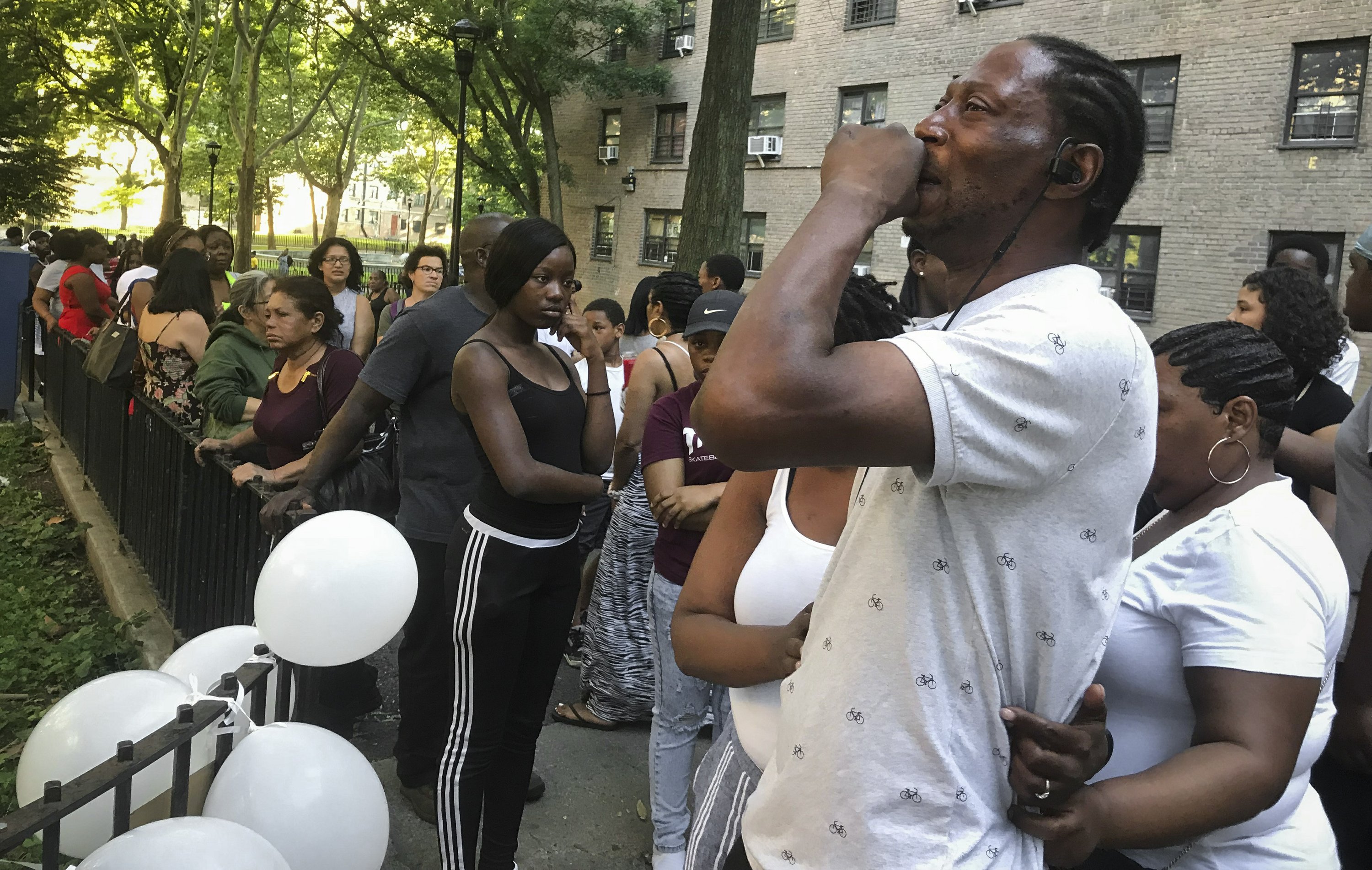 NEW YORK — David Gaskin steps into the street armed with a bullhorn. Cars swerve. He glares.

The former gang member raises the mic to his lips and preaches the message emblazoned on his T-shirt, on his orange baseball cap, on the rubber bands around his wrist and on his Adidas tracksuit: “Stop Shooting. Start Living.”

“If you’re ready to stand against gun violence, let me hear you say, ‘I’m ready!'” he yells to a gathering crowd.

Gaskin staked out his spot in Brooklyn’s Bedford-Stuyvesant neighborhood because that’s where a 27-year-old man was shot three days earlier. His rally was part of the playbook for Save Our Streets (S.O.S), one of a growing number of taxpayer-financed “violence interrupter” groups in the nation’s largest city that enlist former gang members to attack shootings like outbreaks of a disease that they must keep from spreading.

This summer, amid a recent uptick in the killings of young people, the violence interrupters have been working overtime: Stoking outrage over violent crimes to keep them from being accepted as normal, hanging out in high-crime spots to watch out for trouble and even personally stepping in to mediate fights, in some cases after guns have been drawn.

“We’re the foot soldiers,” says Rudy Suggs, a former drug dealer who supervises the violence interrupters for S.O.S. “We’re the ones that come out here late at night, looking for the at-risk youth that’s out here selling drugs, gambling, doing stuff that they shouldn’t be doing.”

These troops mostly come from the ranks of each neighborhood’s former gang members, many of whom have served time for their crimes. There are currently 18 violence interrupter groups in high-crime areas across the city, with four more planned, part of Mayor Bill de Blasio’s plans to maintain historically-low rates of murder and gun violence while also improving the police’s relations with minority communities. Chicago, Baltimore and Philadelphia have similar groups.

“It’s less and less the police who are discouraging bad behavior and more and more these organizations that are encouraging good behavior,” says Elizabeth Glazer, director of the Mayor’s Office of Criminal Justice, which has a $34 million annual budget to pay for these and other programs.

Police similarly respond to a shooting by sending in extra officers, and violence interrupters coordinate with them precinct by precinct, although both are careful not to step on each other’s toes. Sometimes the police will step back to let them mediate a tense situation, but once the police move in, they don’t interfere. And perhaps most importantly, violence interrupters keep their relationships and conversations confidential from the police, so they can maintain the trust of the community.

Charlene Shields, who lives down the block from S.O.S.’s Bed-Stuy office, says some residents don’t trust the police due to their sometimes-heavy-handed approach. She sees the S.O.S. workers more as partners “there to back us up.”

“If we didn’t have S.O.S. looking out for our kids, we’d be panicking all day long,” she says. “They’re doing their job. They need to be in the community.”

This year, both police and the violence interrupters are facing a particular challenge: 16 people between the ages of 10 and 18 have been killed in the city, already matching last year’s total. And since May, 15 percent of the homicide victims citywide have been 18 or younger. Among them was 15-year-old Lesandro “Junior” Guzman-Feliz, whose videotaped stabbing in June by a group of men outside a Bronx bodega shocked the city.

Organizations like S.O.S. don’t see such killings as random occurrences that can’t be stopped. Instead, they are viewed as a consequence of a sequence of events — such as an argument that starts on a basketball court or a fistfight that leads to a shooting. These small fights turn deadly when they go unchecked, so the violence interrupters step in.

Outreach workers go to the hospital immediately after a violent incident to comfort family members and make sure there’s no retaliation. Within 72 hours after a shooting, they hold a rally at the scene of the crime. With a bullhorn, chants, and signs, they wake the neighborhood up to the violence.

“We should be the change-agents that say this is not acceptable,” says Tiffany Murray, the S.O.S. program manager in Bed-Stuy, where the storefront office is dominated by signs that are updated daily: “5 Days Since the Last Shooting.”

Their tactics were developed by Dr. Gary Slutkin, an epidemiologist who treated infectious disease in developing countries. When he returned home to Chicago and started looking at homicide maps, he realized they looked like the maps of cholera or HIV outbreaks. He said that the violence outbreaks needed “health workers who have access and availability and trust,” like the former gang members of S.O.S.

As they walked the 40-square blocks they patrol one recent sweltering afternoon, Lawrence Brown and Joshua Simon lingered where people play dice, drink or barbecue. If an argument starts to get heated, Simon and Brown step in to cool it down.

“We tend to come into contact with a lot of situations now,” Simon says of the summer in Bed-Stuy. “It’s hot now, there’s more people outside, so people are gathering.”

The program seems to be getting results. When S.O.S. opened its Crown Heights program in 2010, the area they patrol had 24 shootings. Last year, there were only 3.

Brown and Simon both spent time in prison, an experience they now use to warn younger men about the path they may be headed down.

“It’s you in that six-by-eight cell and you’ve got to deal with it,” Simon tells them, “And when I speak to them like that, they wake up.”