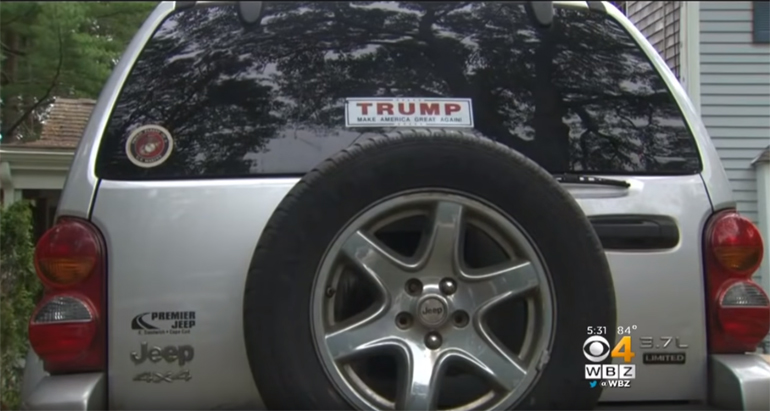 On Monday, a woman was arrested for an alleged hit-and-run attack in which she drove her car into a car sporting a Trump bumper sticker, Fox News reports.

Chloe Wright, 25, was arrested for assault with a dangerous weapon, vandalism and leaving the scene of property damage. The incident took place on June 30 in the Cape Cod village of Hyannis, Massachusetts.

According to a police report filed by the man she hit, Wright started the incident by honking repeatedly while stopped behind the victim at a red light. The honking continued after she stopped behind him at a second red light and began shouting at him.

At this point, the man got out of his car to find out if the honking and shouting meant something was wrong with his car. According to the man, Wright said, “You voted for Trump?” and when he said yes, she called him a “racist” and “several other names.”

The man claims Wright then rammed his car with hers.

“She bent my door and I had to lean back to avoid getting hit,” the man claims in the police report. “She also hit the side of my car.” The man reports that Wright then drove away.

The man’s story was corroborated by his girlfriend who was there at the time.

Progressives regularly warn us that President Donald Trump’s rhetoric will lead to violence. What they leave out is that the only people that seem to be committing the violence are progressives.

On Wednesday, Margaret Sullivan of the Washington Post became the latest prominent member of the elite media to warn of violence stemming from Trump’s rhetoric. Of course, Sullivan, like other voices of the establishment, believe that Trump’s supporters will cause the violence.

Sullivan has it backwards. Recently, we have seen many acts of anti-Republican violence:

On July 25, Trump’s Hollywood Walk of Fame star was vandalized with a pickaxe, and the following day Trump supporters at the star were attacked by protesters.

A 21-year-old woman operating a food cart was threatened with violence by Occupy ICE protesters in Portland.

These actions don’t include violent works of art “killing” President Trump, nor do they include acts of violence that sent Sen. Rand Paul and Rep. Steve Scalise to the hospital last year.