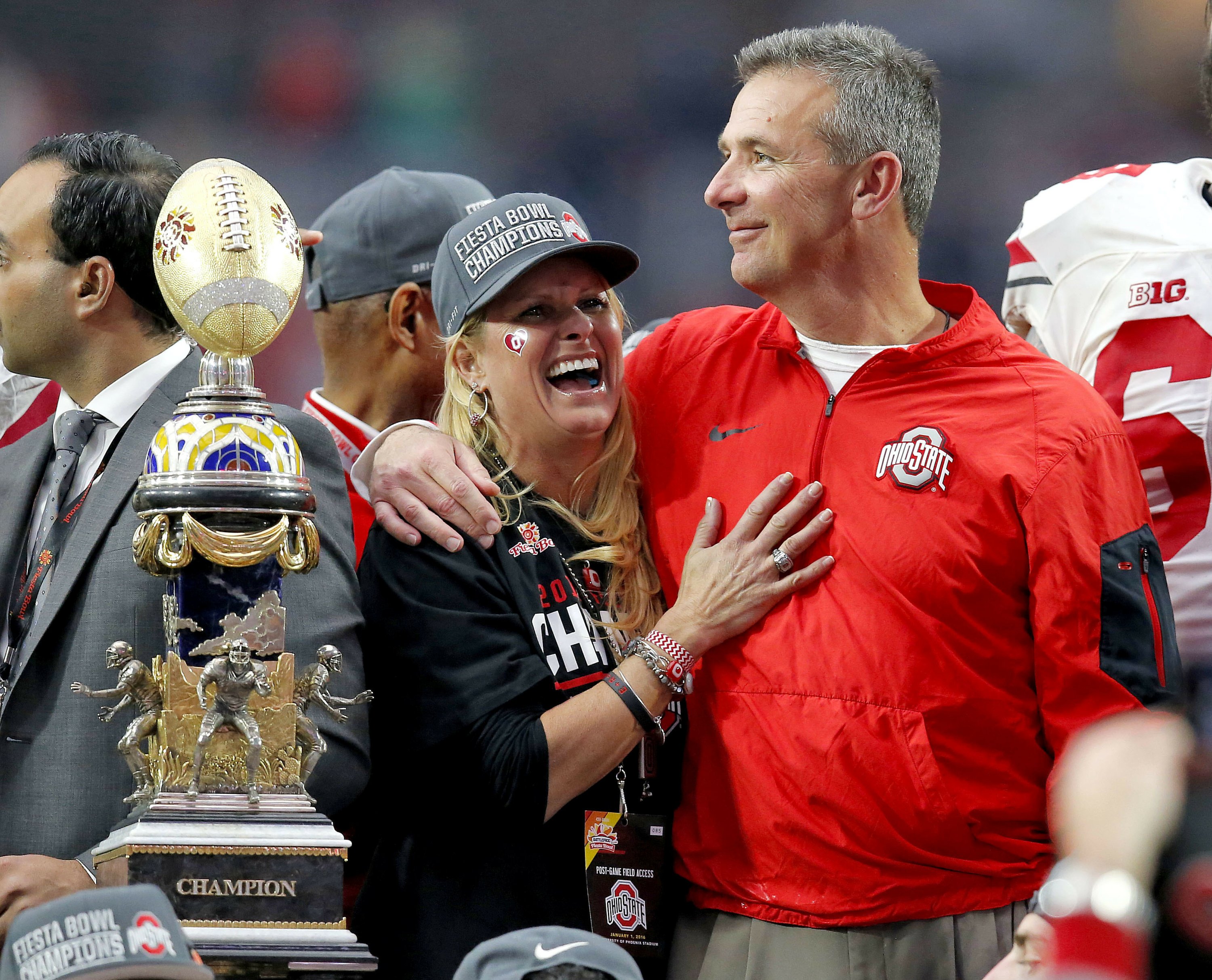 Ohio State coach Urban Meyer insisted Friday he followed proper protocols in reporting domestic violence allegations against an assistant coach in 2015, passionately defending himself in his first extensive comments since he was put on paid leave amid a university investigation.

Meyer posted a statement addressed to Buckeyes fans on Twitter not long after his team, expected to be one of the best in the nation, opened practice for the upcoming season without their coach. Meyer was put on leave Wednesday.

Shortly after Meyer’s statement posted, Zach Smith, the fired assistant coach accused of assaulting his wife, told Columbus radio station 105.7 The Zone that Ohio State athletic director Gene Smith spoke with him in 2015 about the allegations made by Courtney Smith that fall. A police report was made about the incident, but no charges were filed.

What Meyer knew about the allegations and what he did about them has ballooned into a crisis for one of the most storied programs in college football history. It also comes as the school is reeling from a sexual abuse scandal involving a now-dead sports doctor, Richard Strauss.

The Buckeyes open the season at home Sept. 1 against Oregon State. Co-offensive coordinator Ryan Day is acting head coach and there is no timeline for the Meyer inquiry to conclude.

“Over the past several days I have been portrayed as being indifferent to domestic violence and as someone who did not take appropriate action when warranted,” Meyer said.

“Here is the truth: While at the University of Florida and now at the Ohio State University I have always followed proper reporting protocols and procedures when I have learned of an incident involving a student-athlete, coach or member of our staff by elevating the issues to the proper channels. And I did so regarding the Zach Smith incident in 2015. I take that responsibility very seriously and any suggestion to the contrary is simply false.”

At Big Ten media days last week, Meyer said he knew of an incident involving the Smiths in 2009 and that he and his wife, Shelley Meyer, addressed it with the Smiths. He was also asked about a 2015 incident alleged by Courtney Smith, who also said she told Meyer’s wife about those incidents.

“I can’t say it didn’t happen because I wasn’t there,” Meyer said at the time. “I was never told about anything and nothing ever came to light. I’ve never had a conversation about it. I know nothing about it. First I heard about that was last night. No, and I asked some people back at the office to call and say what happened and they came back and said they know nothing about it.”

Meyer said his intention at media day was not to say anything inaccurate and he apologized.

“The power of what I say and how I say it, especially regarding sensitive and serious domestic issues, has never been more evident than now. My words, whether in a reply to a reporter’s question or in addressing a personnel issue, must be clear, compassionate and most of all, completely accurate,” Meyer said. “Unfortunately at Big Ten media days on July 24th, I failed on many of these fronts. My intention was not to say anything inaccurate or misleading. However, I was not adequately prepared to discuss these sensitive personnel issues with the media, and I apologize for the way I handled those questions.”

Meyer said he will fully cooperate with investigators. Ohio State did not respond Friday to a request seeking comment on the comments by Meyer or Smith, who told the radio station his marriage was volatile and that he made mistakes. The Smiths divorced in 2016.

“I don’t believe I have ever threatened her or anyone,” said Zach Smith, who had been an assistant at Ohio State since Meyer was hired in 2012.

Smith, the grandson of late Buckeyes coach Earle Bruce, a mentor to Meyer, played for Meyer when he was coach at Bowling Green in 2001-02. Smith also was a graduate assistant for Meyer at Florida for five seasons.

In 2009, Zach Smith was accused by his wife of assault but no charges were filed. Meyer has said he and his wife tried to counsel the couple at the time.

Meyer has been at Ohio State for six seasons, going 73-8 with a national championship in 2014 and two Big Ten conference titles. He earlier won two national titles at Florida.

A clause in Meyer’s new contract, which raised his salary to $7.6 million this year and runs through 2022, also requires him to “report to Ohio State’s Title IX athletics any known violations” of the sexual misconduct policy involving students, faculty or staff at the risk of being fired with cause. Firing Meyer without cause would cost Ohio State a nearly $40 million buyout.

On Thursday, Ohio State barred media access to players and coaches until at least Monday.