Remains from North Korea ‘consistent with being Americans’ 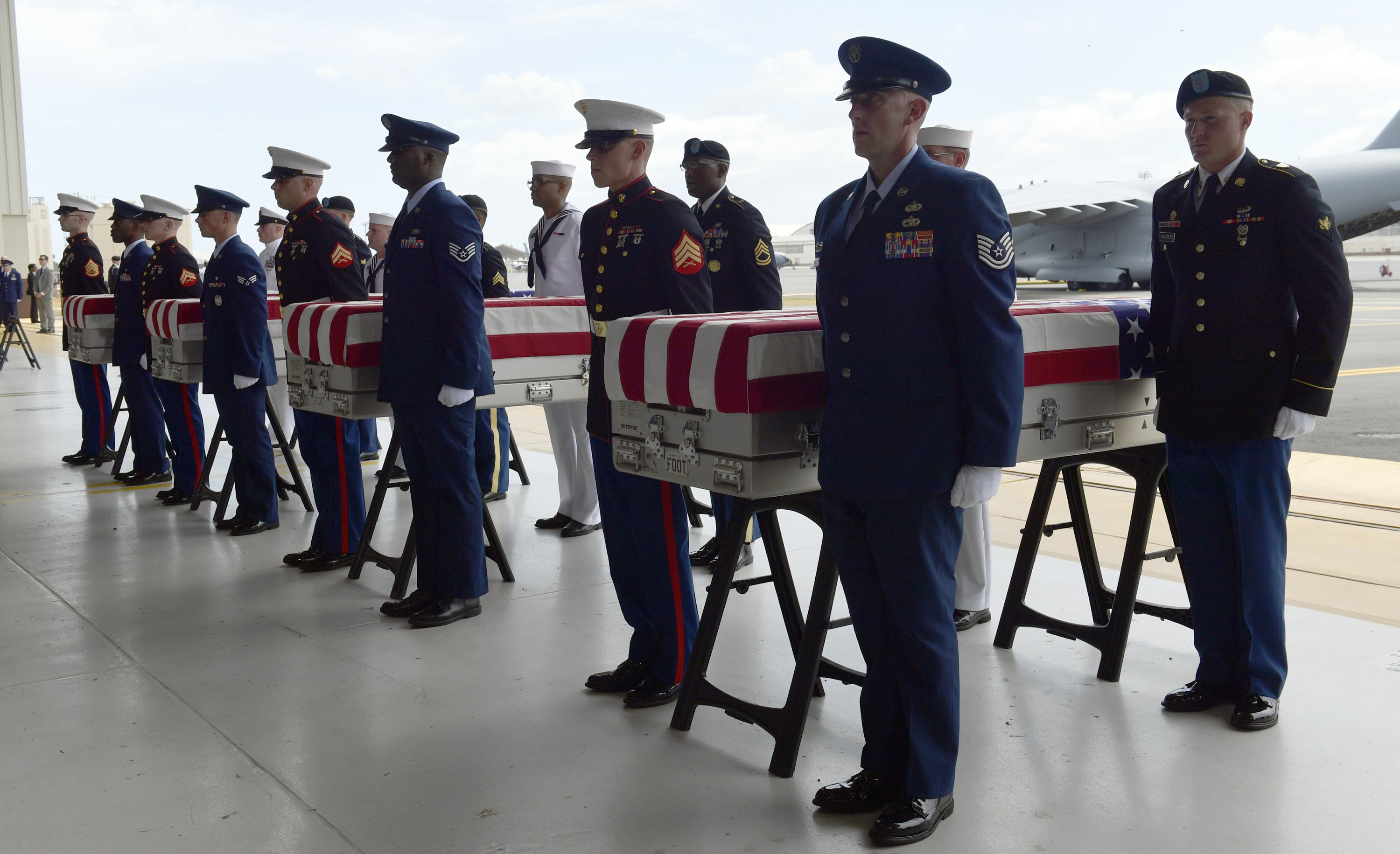 WASHINGTON — The remains handed over by North Korea last week in 55 boxes are “consistent with being Americans,” based on an initial examination, although none has been positively identified, a U.S. scientist who has seen the remains said Thursday.

Although President Donald Trump has publicly thanked North Korean leader Kim Jong Un for fulfilling the promise he made at their June 12 Singapore summit to return American war remains, U.S. officials had cautioned that little was known about the remains and that they could not be quickly identified.

John E. Byrd, director of the Defense Department laboratory in Hawaii where the 55 cases arrived on Wednesday, cited several reasons for saying that at least some of the remains appear to be those of Americans missing from the Korean War.

Byrd was present when North Korean officials turned over the 55 boxes at Wonsan airport in North Korea last Friday, and he was among the U.S. government specialists who made a further preliminary examination of the contents after the boxes were flown to Osan air base in South Korea the same day.

A cursory examination at Wonsan confirmed that the remains were human, he said, and a closer look at Osan gave reason to believe they likely are Americans.

“We have remains that look to have been in a state of preservation consistent with coming from the Korean War era,” he said, and materials provided with the remains included U.S.-issued military equipment such as canteens and buttons. He said the remains are “good candidates to be missing Americans from the Korean War,” where thousands died on battlefields and in prisoner-of-war camps during the 1950-53 conflict and remain officially unaccounted for.

Byrd said he would not venture a guess at how many individuals are represented by the bones contained in the 55 boxes.

When the North Koreans turned over the 55 boxes to Byrd and other U.S. officials at Wonsan on July 27 they said the cases contained remains of an undetermined number of Americans, but the only identification item provided was a single military dog tag, Byrd said. Two members of that person’s family have been notified, Kelly McKeague, the director of the Defense POW-MIA Accounting Agency, told reporters.

McKeague declined to reveal the name on the dog tag.

Byrd said the North Koreans at Wonsan provided what he described as a “short bit, a little paragraph of information” with each of the 55 boxes. The most significant bit of information in each case was the name of the village where the remains were recovered, he said. One of the villages was Sin Hung-ri, which he said is on the east side of the Chosin Reservoir where U.S. Army soldiers fought a fierce battle in the fall of 1950 after Chinese forces entered the war.

North Korea had told American officials more than once in recent years that it had about 200 sets of U.S. war remains in storage. McKeague said Thursday that the North Koreans who provided the 55 boxes last week did not say whether they have others. He said the U.S. is prepared to discuss arrangements for future U.S.-North Korean excavations but that this process is not yet underway.

Byrd said his laboratory in Hawaii already has begun working on the remains. The first step, he said, is sampling the bones for DNA that potentially could be matched with DNA samples that have been provided over the years by relatives of Korean War MIAs. If matches are achieved, identification can be done relatively quickly, he said, but in other cases the identification work will take years.

The forensics work in some cases is aided by records of chest X-rays that U.S. soldiers commonly were given upon entering the military, as well as dental records.

In an illustration of how long it can take to identify Korean War remains, McKeague’s agency announced Thursday that the remains of a soldier found more than a decade ago, Army Sgt. William A. Larkins, of Pittsburgh, are being returned to his family for burial. He was identified from remains recovered by a joint U.S.-North Korean team in April and May 2005.