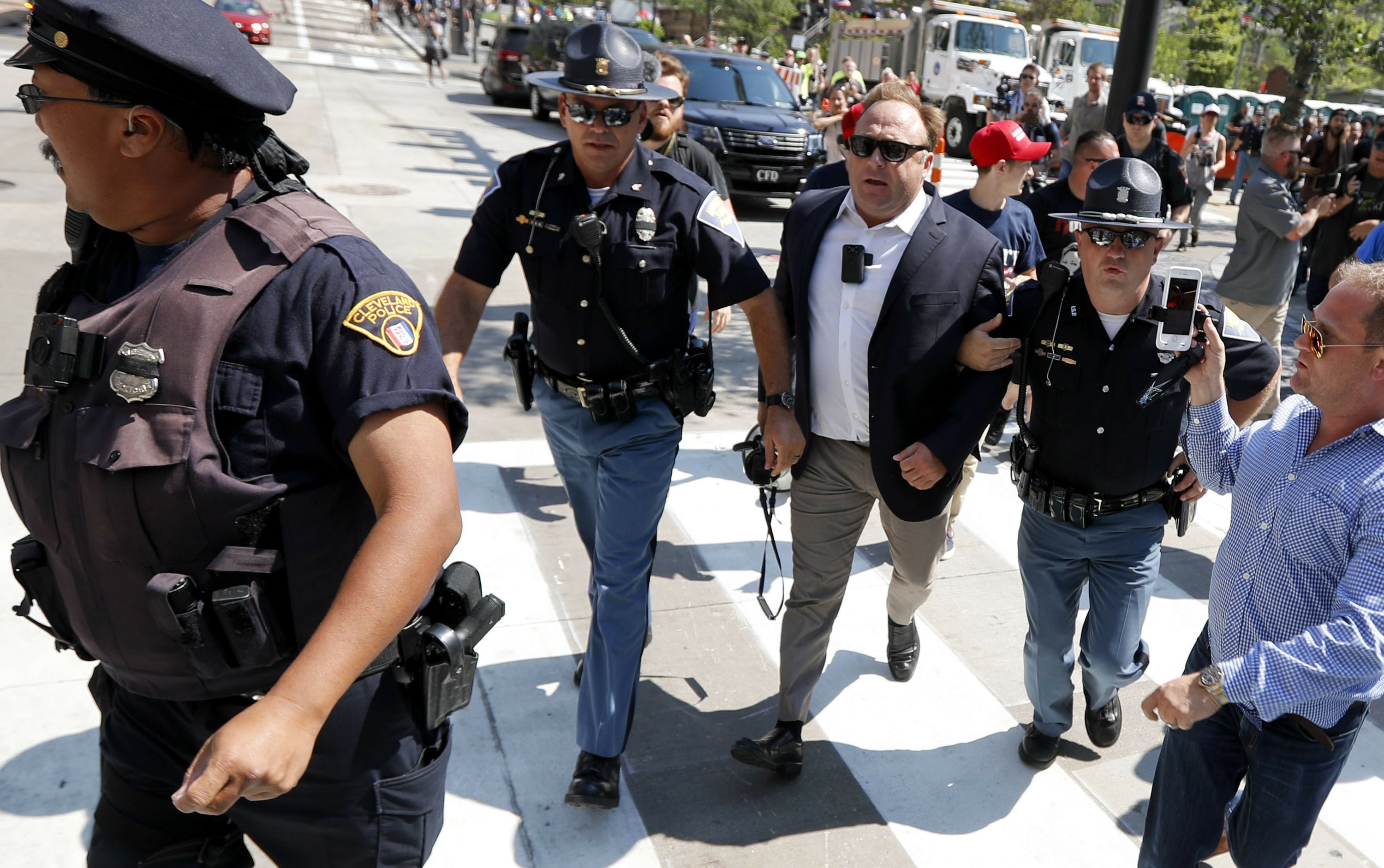 Facebook has taken down four pages belonging to Jones, including two featuring his “Infowars” show, for violating its hate speech and bullying policies. Over the past several days, Apple, YouTube and Spotify have also removed material published by Jones. Twitter, which hasn’t banned Jones, has also faced similar calls.

Facebook has also suspended Jones’ account for 30 days because he repeatedly violated the company’s community standards against hate speech that “attacks or dehumanizes others,” it said in a statement Monday. Facebook did not immediately respond Monday asking what would happen after the 30 days are up, and why it hadn’t taken action earlier. The 30-day suspension of Jones himself appears to have gone into effect in late July.

“We’ve been banned completely on Facebook, Apple, & Spotify,” Jones wrote on Twitter. “What conservative news outlet will be next?”

Jones has amassed a large following on the right while promulgating conspiracy theories that claim terror attacks such as 9/11 were actually carried out by the government. Among his claims is that the 2012 Sandy Hook Elementary School mass shooting, which left 20 children and six adults dead, was a hoax.

It’s unclear why the companies are cracking down on Jones now, after allowing him to publish for years. Facebook has been under fire recently for not banning Jones, but as recently as July 12 it tweeted that it sees pages “on both the left and right pumping out what they consider opinion or analysis — but others call fake news.”

“We believe banning these Pages would be contrary to the basic principles of free speech,” Facebook posted in response to a question from CNN reporter Oliver Darcy, who had been pressing the company on why it continued to allow “Infowars” on its platform.

On Monday, the company said that it “unpublished” the four pages after receiving reports that they contained content “glorifying violence” and used “dehumanizing language” to describe Muslims, immigrants and transgender people.

“While much of the discussion around Infowars has been related to false news … none of the violations that spurred today’s removals were related to this,” Facebook said on Monday.

In response to a query from the Associated Press, Apple said only that it “does not tolerate hate speech” and referenced its guidelines for creators and developers, but did not name Jones or comment further. As of Monday, iTunes searches for “Infowars” or “Alex Jones” turned up no podcasts created by Jones. Entering the web addresses for specific shows brought up a notice that the content is not available.

And as of Monday, Alex Jones’s channel was not available on YouTube, with a notice that the account “has been terminated for violating YouTube’s Community Guidelines.” The Infowars YouTube channel was also labeled as “terminated.”

Jones says his shows, which are broadcast on radio, and online platforms, reach at least 70 million people a week. It’s unclear how the latest bans have affected his reach.

YouTube said in a statement that when users violate its policies against hate speech and harassment, “we terminate their accounts.” But the company did not give specifics on Jones or Infowars.

“What it reflects is a slow realization that the platforms are megaphones to fuel extremist ideas,” said Keegan Hankes, research analyst for the Southern Poverty Law Center’s Intelligence Project, who focuses on far right extremist propaganda online. The decision to enforce policies, he added, “has been a long time coming.”

Hankes added that he is “not surprised” that Twitter continues to allow Jones on its platform.

“If they were to ban Alex Jones,” he said, he’d question why the company doesn’t ban “outright white supremacists, including those who have participated in violent rallies.”

Families of some Sandy Hook victims have sued Jones for defamation, and he now acknowledges that the shooting occurred but says his claims were free speech.

Last month, the parents of one of the children killed in the shooting wrote an open letter to Facebook CEO Mark Zuckerberg calling on him to ban “conspiracy groups and anti-government provocateurs” that use social media to call the massacre a hoax and harass and threaten the families of the victims.

“Our families are in danger as a direct result of the hundreds of thousands of people who see and believe the lies and hate speech, which you have decided should be protected,” wrote Lenny Pozner and Veronique De La Rosa, the parents of Noah, who was six years old when he died at Sandy Hook.

Brent Bozell, the president of the nonprofit Media Research Council, whose stated mission is to “to expose and neutralize the propaganda arm of the Left: the national news media,” called the crackdown in Infowars a “slippery slope.”

“(It’s) a dangerous cliff that these social media companies are jumping off to satisfy CNN and other liberal outlets,” Bozell said in a statement. “Social media sites are supposedly neutral platforms, but they are increasingly becoming opportunities for the left and major media to censor any content that they don’t like.”