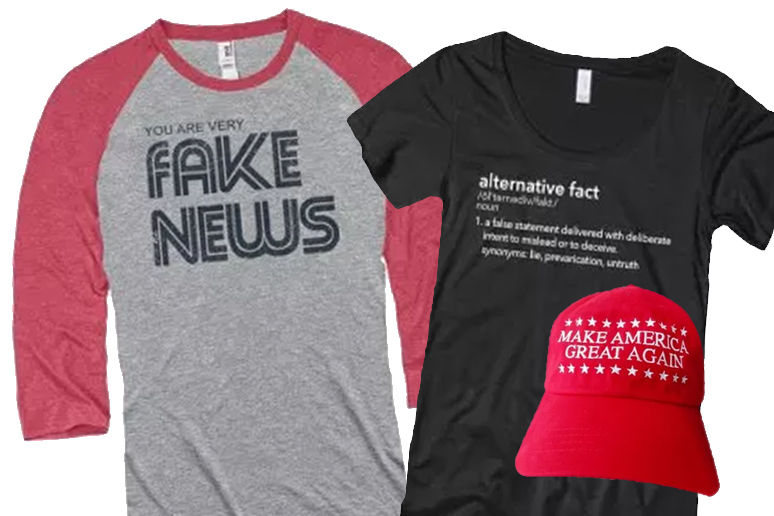 The liberal media is complaining about the Newseum, a museum in Washington D.C., which according to its website is a non-profit enterprise whose mission is to “increase public understanding of the importance of a free press and the First Amendment.” They are not complaining not about the museum’s exhibits, however, but rather it has concerned itself most with what visitors see after the visit the museum: the gift shop.

Among the journalists who criticized the Newseum’s decision to sell the “fake news” shirts were New York Times podcaster Michael Barbaro and Politico reporter Jake Sherman.

This is a very bad idea @Newseum — you exist to honor, examine and protect the news media, not embrace the bywords by which others seek to undermine it. https://t.co/DBt3kfIPpA

The item is one of several Trump-related pieces of apparel on sale at the museum, including a Trump T-shirt and “Make America Great Again” hats.

In a statement, the Newseum originally defended its decision to sell such items, saying, “As a nonpartisan organization, people with differing viewpoints feel comfortable visiting the Newseum, and one of our greatest strengths is that we’re champions not only of a free press but also of free speech.”

But on Saturday the Newseum bowed to media pressure and removed the “fake news” T-shirt from its store.

“We made a mistake and we apologize. A free press is an essential part of our democracy and journalists are not the enemy of the people,” the Newseum said in a statement.

However, the Newseum refused to stop selling MAGA hats and other Trump merchandise:

“Questions have also been raised regarding other merchandise. As an organization that celebrates the rights of people from all political spectrums to express themselves freely, we’ve historically made all types of political merchandise available for our guests to purchase. That has included former and current presidential slogans and imagery and merchandise from all political parties. We continue to do so in celebration of freedom of speech.”

The complaints about the shirts with the words “You are very fake news” have at least some merit to them. A museum that is supposed to promote the importance of the free press should not actively be engaging in a way that would belittle news agencies.

But what about the criticism regarding MAGA hats? This is really unjustified. Why does the media even care what political apparel the Newseum sells? The media should, after all, be non-partisan and should not actively express its opinion regarding American politics; it should merely report the news.

“The MAGA hat and the FBI hat are two of our best-selling items,” Sonya Gavankar, director of public relations for the Newseum said.

By the looks of it, the liberal media just simply annoyed that President Trump’s gear is being sold and worn by his supporters. And they want to put an end to it. The Newseum rightfully said it will continue to sell Trump MAGA hats.

There is a difference between listening to the media’s fair criticism, and bowing to a demand.

Maybe the liberal media should take a trip to the Newseum; they might actually learn something.

Pointedly, the Newseum has not received media complaints about (or taken down) its “Alternative Facts Tee,” which satirizes White House counselor Kellyanne Conway’s use of the phrase “alternative facts” by defining it as “a false statement delivered with deliberate intent to mislead or to deceive.”