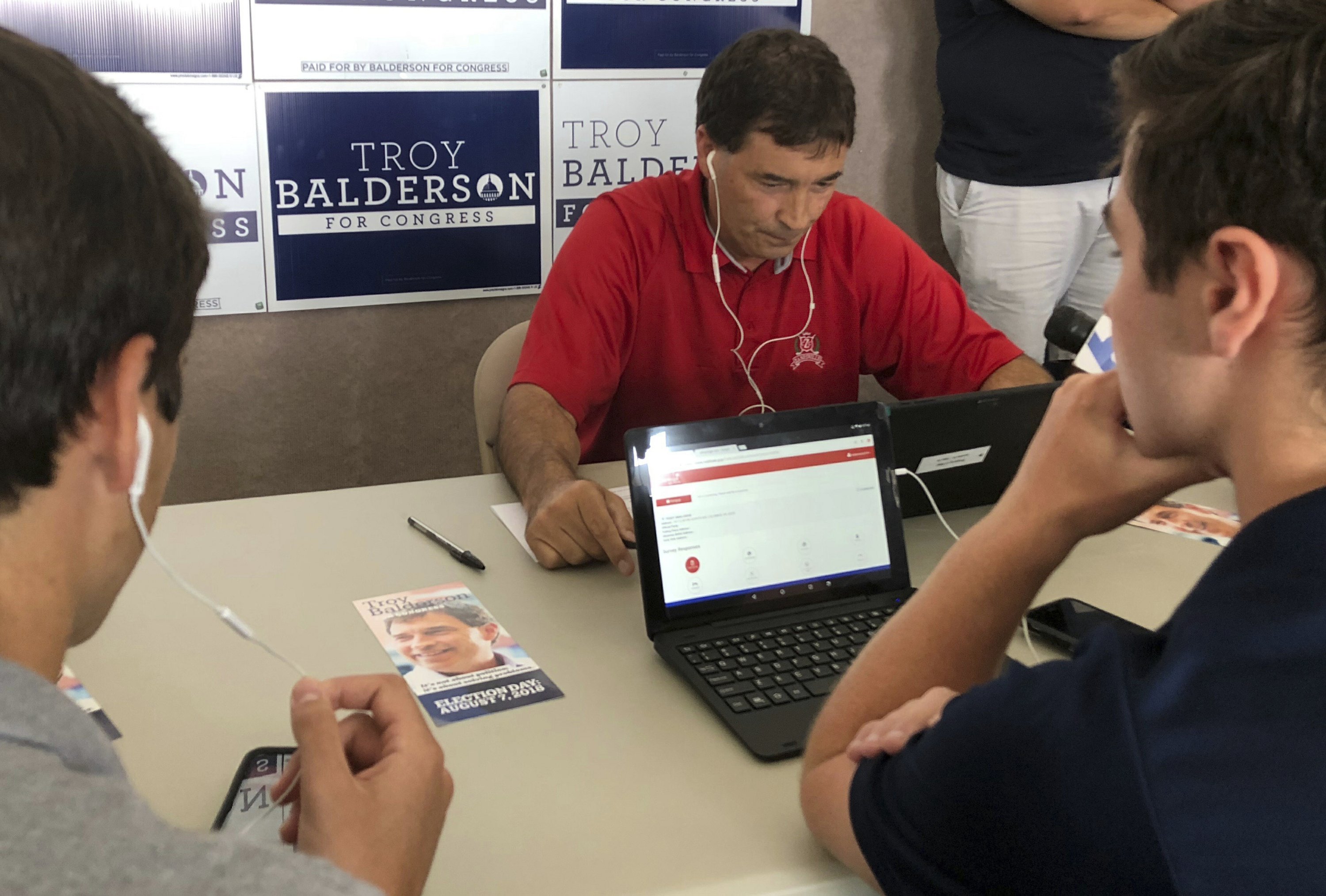 WESTERVILLE, Ohio — President Donald Trump’s preferred congressional candidate — and his chief legislative achievement — are about to be tested in battleground Ohio in the season’s final high-stakes special election.

The midsummer affair comes as Trump’s shadow looms over primary contests in four other states on Tuesday, none bigger than Kansas, where the Republican president roiled the governor’s race Monday by opposing the sitting GOP governor on the eve of the election.

The races, like dozens before them, pit the strength of the Republican president’s fiery coalition against the Democratic Party’s anti-Trump resistance. The results will help determine the political landscape — and Trump’s standing within his own party — just three months before the GOP defends its House and Senate majorities across the nation.

Voters in Ohio and Kansas join those across Missouri, Michigan and Washington state at the ballot box. But only Ohio will send someone to Congress after the votes are counted.

The script for Ohio’s special election is perhaps familiar: An experienced Trump loyalist, two-term state Sen. Troy Balderson, is fighting off a strong challenge from a fresh-faced Democrat, 31-year-old county official Danny O’Connor, in a congressional district held by the Republican Party for more than three decades.

The winner will fill the seat previously held by Pat Tiberi, a nine-term Republican incumbent who resigned to take a job with an Ohio business group.

Trump himself campaigned at Balderson’s side just 72 hours before Election Day, a weekend appearance to help energize his loyalists in a district the president carried by 11 percentage points.

But there was little evidence of enthusiasm on the eve of the election as Balderson tried to connect with voters over the phone during a brief stop at a campaign phone bank. He appeared equally uncomfortable answering questions from reporters about whether Trump’s appearance might blunt the impact of the recent endorsement from a prominent Trump adversary, Republican Gov. John Kasich.

Balderson said simply that it was an honor and “incredible” to appear with and be supported by the president. He called the race “very close.”

It’s unclear, however, whether Trump’s support helps or hurts his preferred candidate. Described by campaign operatives as a “Whole Foods” district, the largely suburban region features a far more affluent and educated voter base than the typical Trump stronghold.

Kasich, a leading voice in the GOP’s shrinking anti-Trump wing, previously represented the district in Congress.

The race has centered on Trump’s tax cuts at times as much as the candidates themselves.

O’Connor and his Democratic allies have railed against the tax plan, casting it as a giveaway for the rich that exacerbates federal deficits and threatens Medicare and Social Security. Balderson and his Republican allies have backed away from the tax plan in recent weeks, training their fire instead on top House Democrat Nancy Pelosi.

O’Connor has dominated Balderson on the local airwaves. His campaign spent $2.25 million on advertising compared to Balderson’s $507,000, according to campaign tallies of ad spending. The Republican campaign arm and its allied super PAC was forced to pick up the slack, spending more than $4 million between them.

During a lively event in a Democrat-heavy Columbus neighborhood Monday, O’Connor urged volunteer canvassers to think about what’s at stake for working people, including access to affordable health care.

Meanwhile, more than 700 miles to the west, Kansas Republicans were fighting among themselves in the escalating battle for governor, where Secretary of State Kris Kobach was trying to unseat Gov. Jeff Colyer.

Should the polarizing Kobach win, some Republican operatives fear he could lose the governor’s seat to Democrats this fall. The race could become further disrupted if Kansas City-area businessman Greg Orman makes it onto the November ballot. He submitted petitions Monday with more than 10,000 signatures for what could become the most serious independent run for Kansas governor in decades.

“He is a fantastic guy who loves his State and our Country – he will be a GREAT Governor and has my full & total Endorsement! Strong on Crime, Border & Military,” the president tweeted on the eve of the election. “VOTE TUESDAY!”

Republicans are hoping for Democratic discord in Kansas’ 3rd Congressional District, a suburban Kansas City region where several candidates are fighting for the chance to take on Republican Rep. Kevin Yoder in November.

Voters in suburban Detroit will also weigh in on the direction of the Democratic Party. Three mainstream Democrats are viewed as leaders to vie for retiring Republican Rep. Dave Trott’s seat in November. The field includes Fayrouz Saad, who would be the first Muslim woman in Congress.

And in suburban Seattle, three Democrats are vying in a jungle primary for the seat held by another retiring Republican, Rep. Dave Reichert.

Senate contests in Missouri and Michigan will come into focus as two vulnerable Senate Democrats, Missouri’s Claire McCaskill and Minnesota’s Debbie Stabenow, are expected to easily claim their party’s nominations.

Missouri Secretary of State Josh Hawley is expected to take on McCaskill, while in Michigan, military veteran and business executive John James is vying for the chance to knock off Stabenow. He’d join Sen. Tim Scott as the only black Republican senators if he did.

“If he becomes the Republican candidate, he will beat the Open Borders, weak on Crime, Democrat, Debbie Stabenow,” Trump wrote. “Vote for John James and Make America Great Again!”