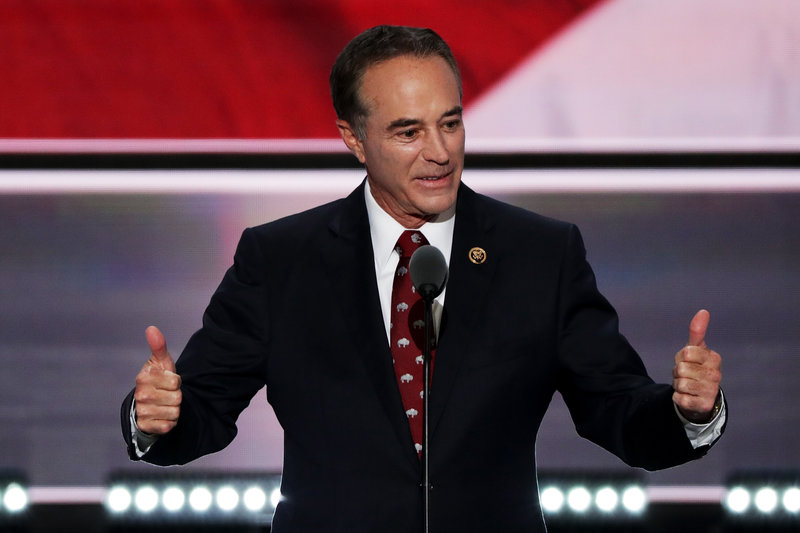 NEW YORK — Republican U.S. Rep. Christopher Collins of western New York state has been indicted on charges that he used inside information about a biotechnology company to make illicit stock trades.

The charges were announced and the indictment unsealed in New York City on Wednesday.

The indictment charges Collins, the congressman’s son and the father of the son’s fiance, with conspiracy, wire fraud and other counts.

Prosecutors say the charges relate to a scheme to gain insider information about Innate Immunotherapeutics Limited, a biotechnology company headquartered in Sydney, Australia, with offices in Auckland, New Zealand.

According to the indictment, the defendants tried to get early word on the results of trial of a drug the company developed to treat multiple sclerosis.

Collins, whose district covers parts of western New York between Buffalo and Rochester, has denied any wrongdoing. When the House Ethics Committee began investigating the stock trades a year ago, his spokeswoman called it a “partisan witch hunt.”

“We will answer the charges filed against Congressman Collins in court and will mount a vigorous defense to clear his good name,” his attorneys, Jonathan Barr and Jonathan New, said in a statement Wednesday. “It is notable that even the government does not allege that Congressman Collins traded a single share of Innate Therapeutics stock. We are confident he will be completely vindicated and exonerated.”

All three defendants were in federal custody Wednesday and were expected to make their initial court appearance in the afternoon.

Collins was a member of Innate’s board of directors and held nearly 17 percent of the stock. When the drug trials failed, the public announcement caused the stock price of Innate to plunge 92 percent.

Prosecutors allege that Collins passed along secrets to his son, Cameron, in June 2017. They say the son traded on the inside information and passed it to a third defendant, Stephen Zarsky. They say Zarsky traded on it and tipped off at least three others.

Prosecutors say the three avoided over $768,000 in losses by trading ahead of the public announcement of the failed drug trials.

The advocacy group Public Citizen filed a request for an investigation of Collins’ stock dealings with the Office of Congressional Ethics and the Securities and Exchange Commission in January of 2017.