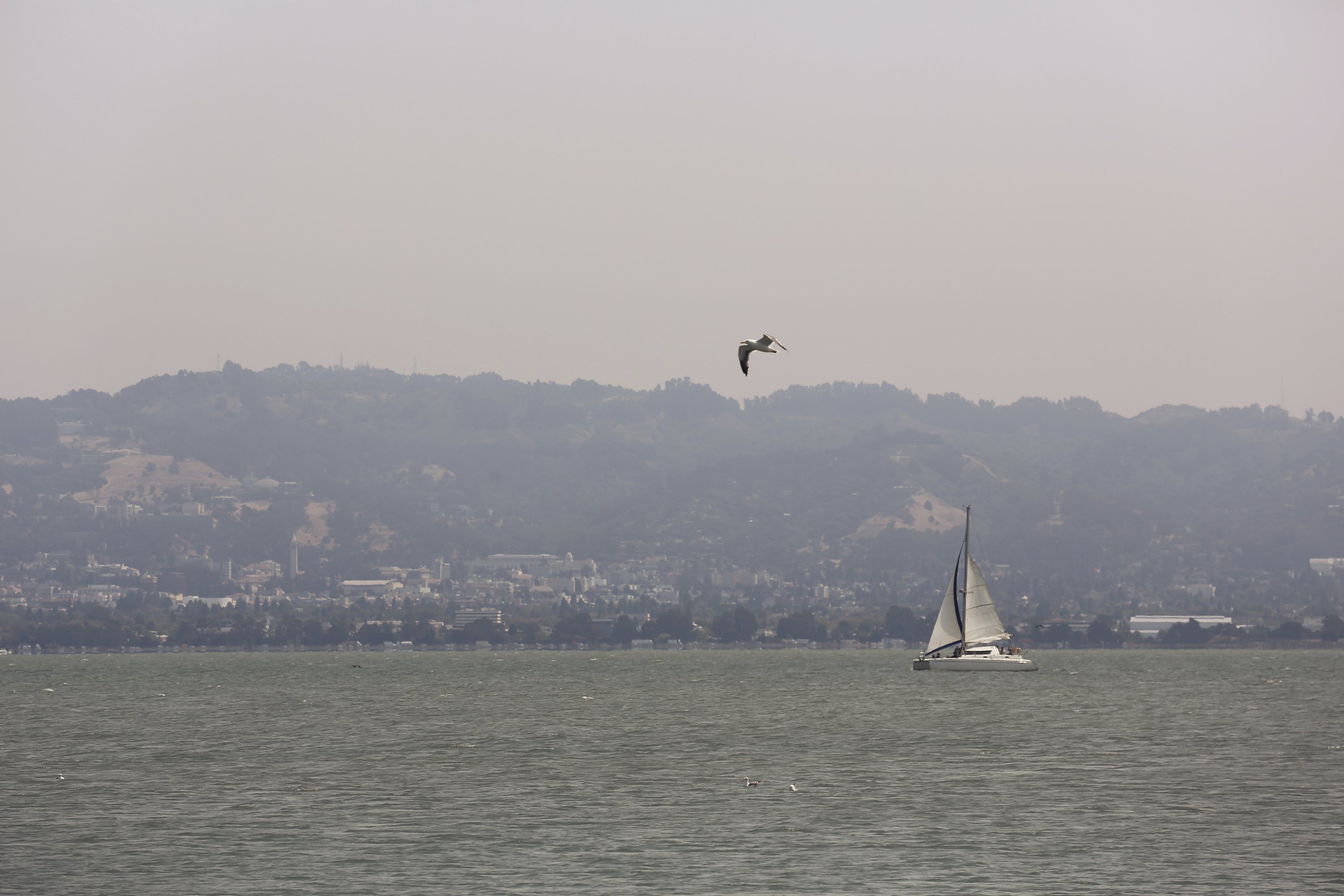 SACRAMENTO, Calif. — No major wildfires are burning near Sacramento but for two weeks a dull haze and the faint smell of smoke from distant blazes has blanketed California’s capital region, forcing summer campers to stay inside, obscuring normally bright skylines and leaving ash on cars.

Experiencing smoky air from blowing winds is nothing new in many California cities, but Sacramento air quality experts say it’s rare for the dirty air to linger for so long, a reality of ever-larger fires that take longer to extinguish.

The haze stretches to the foothills of the Sierra Nevada mountain range, and nearly every major population center in between has suffered air quality that’s considered dangerous for children, the elderly and people with asthma or other respiratory conditions.

Kaela Baylis used to take her nearly 2-year-old son to a park twice a day, but has only gone in the morning the last 10 days.

“He asks to go outside a lot in the afternoon,” she said Wednesday.

There are two major wildfires — one called the Mendocino Complex Fire that is the largest in California history — burning more than 100 miles (160 kilometers) north of Sacramento and another huge fire near Yosemite National Park a little farther to the southeast. Firefighters made significant process against the Mendocino Complex for the first time Wednesday but said the blazes will likely continue through September.

The fires have combined to produce unhealthy air that has drifted as far east as Salt Lake City, 450 miles (725 kilometers) away.

The skies there were so murky that residents there couldn’t even see the nearby mountain range that hovers over the valley earlier this week. Utah air quality officials warned children and seniors to limit time outside.

The skies cleared a bit on Wednesday in Utah’s capital city, but more smoke is expected to blow in over the weekend, National Weather Service meteorologist Steve Rogowski said.

Wednesday marked the Sacramento region’s 13th straight “Spare the Air” day, when people are encouraged not to drive and add further pollutants to the air — the longest stretch since at least 2001. A similar warning is effect in the San Francisco Bay Area, and air quality experts in California’s Central Valley and areas southeast of Los Angeles are warning residents to limit outdoor exposure because of wildfires there.

On Wednesday morning, John and Rosalie Gonzales strolled through a Sacramento park with their toddler granddaughter they were visiting. For the last few days at their home in the San Francisco Bay Area community of Albany they have awakened to ash on their cars from the Mendocino Complex Fire.

That was a rarity until a few years ago, before California began experiencing more unusually large wildfires, they said. “It doesn’t seem like it’s sustainable to have this happening year after year after year,” she said.

A day earlier, dozens of summer campers sat inside watching a movie at a Sacramento YMCA.

“Normally that doesn’t happen on a regular day at camp,” said Jay Lowden, president of the YMCA for a nine-county region that serves more than 700 kids weekly at 13 summer camps. His counselors monitor the air quality on a daily basis, and Lowden said he may cancel a planned family camp this weekend in the foothills because of the smoke.

Sac United, a competitive youth soccer club, has cancelled four practices in the past two weeks because of poor air quality. High school sports teams are being similarly conscious of dangerous air as practices get underway.

Sacramento residents have taken to Twitter to share photos of a dark grey sky hanging over the Capitol in mid-afternoon and a city skyline difficult to make out. The smell of smoke has even slipped into downtown office buildings.

“It was horrible; I’ve never seen anything like it before,” Mayor Darrell Steinberg said of Monday’s afternoon haze.

Lori Kobza, spokeswoman for the Sacramento Air Quality Management District, said it’s hard to predict when things will improve because of the unpredictably of the fires and the winds.

Because the city is located in a valley, it’s easier for smoky air to get trapped here when high pressure systems blow in, making Sacramento like a smoke-filled bowl that’s had a lid placed tightly on top.

“We’re all trapped in it,” Kobza said.