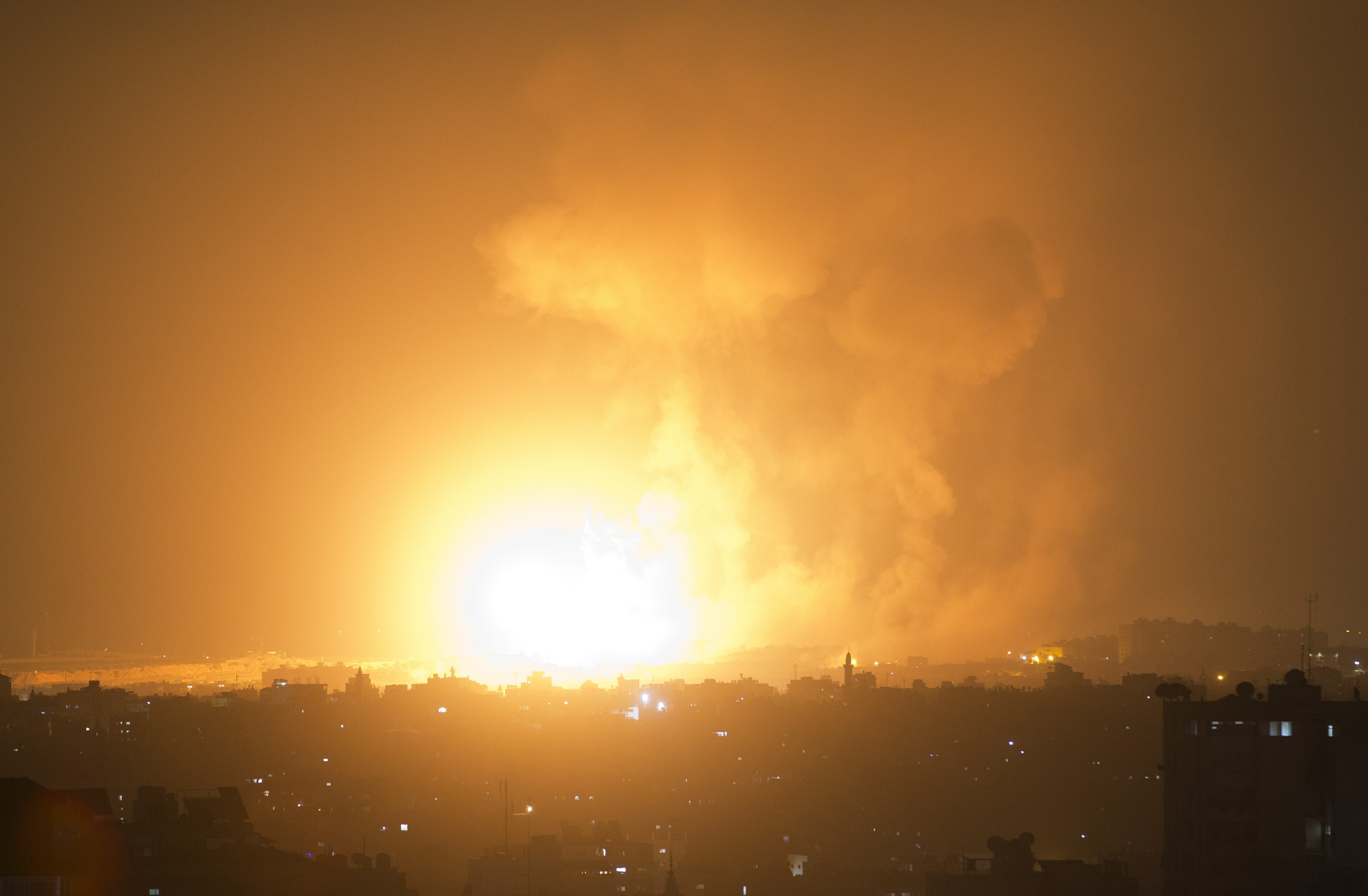 JERUSALEM — Israeli warplanes struck dozens of targets in the Gaza Strip and three people were reported killed there, while Palestinian militants from the territory fired scores of rockets into Israel in a fierce burst of violence overnight and into Thursday morning.

The flare-up comes as Egypt is trying to broker a long-term cease-fire between the two sides. At least three Palestinians died — a pregnant woman, her 1-year-old daughter and a Hamas militant, according to the Gaza Health Ministry.

On the Israeli side, at least seven people were wounded.

It was not clear if the escalation, the latest in a series of intense exchanges of fire in recent months, would derail the indirect negotiations between Israel and Gaza’s Hamas militant rulers.

Israel and Hamas have fought three wars since the Islamic militant group seized control of Gaza in 2007. Despite the animosity, the bitter enemies appear to be working through Egyptian mediators to avoid another war.

Hamas is demanding the lifting of an Israeli-Egyptian border blockade that has devastated Gaza’s economy, while Israel wants an end to rocket fire, as well as recent border protests and launches of incendiary balloons, and the return of the remains of two dead soldiers and two live Israelis believed to be held by Hamas.

But the continued outbursts of fire have jeopardized those cease-fire efforts. On Tuesday, the Israeli military struck a Hamas military post in Gaza after it said militants fired on Israeli troops on the border. Hamas said two of its fighters were killed after taking part in a gunfire parade inside a militant camp.

The incident occurred while a group of senior Hamas leaders from abroad were visiting Gaza to discuss the ceases-fire efforts with local leaders.

A top Hamas official told The Associated Press that the group waited for the delegation to leave Gaza before responding with rocket fire late Wednesday.

The Israeli military said over 150 rockets and mortars were fired at Israel, and Israel carried out over 140 airstrikes targeting Hamas militant positions.

Gaza’s Health Ministry identified those killed in the airstrikes from Wednesday to Thursday as Hamas fighter Ali Ghandour, 23-year-old Enas Khamash and her daughter Bayan. The ministry said the militant and the civilians were killed in separate incidents.

In southern Israel, two Thai laborers were among the seven wounded by rocket fire, and rockets damaged buildings in the cities of Sderot and Ashkelon. The military said it intercepted some 25 rockets, while most of the others landed in open areas. Israel said it launched airstrikes targeting rocket launchers, weapons stockpiles, tunnels and other Hamas infrastructure.

Israeli Cabinet minister for construction and housing, Yoav Galant, said that “whatever is needed to be done to defend our civilians and soldiers, will be done, no matter what would be the price in Gaza.”

Conricus wouldn’t comment on Israeli media reports of troops preparing for a possible ground operation, but said Israel “had ground troops that are ready to deploy. We are reinforcing the southern command and Gaza division.”

On Wednesday, the Israeli military shelled the Palestinian territory after civilians working on the Gaza border fence came under fire. Hamas militants responded with a cross-border fusillade that sent Israelis scrambling for air raid shelters.

The Hamas official, speaking on condition of anonymity because he was discussing classified negotiations, said that cease-fire talks were in their final stage but that disagreements remained. He said Hamas is demanding the complete lifting of the Israeli-Egyptian blockade, while Israel has offered only to ease the restrictions.

Tension along the Israel-Gaza border has escalated since late March, when Hamas launched what would become regular mass protests along Israel’s perimeter fence with Gaza. The protests have been aimed in part at trying to break the blockade.

Over the past four months, 163 Palestinians have been killed by Israeli fire, including at least 120 protesters, according to the Gaza Health Ministry and a local rights group. An Israeli soldier was killed by a Gaza sniper during this period.

Israel says it has been defending its sovereign border against infiltration attempts by Hamas. But it has come under heavy international criticism for its frequent use of force against unarmed protesters.