Democrats’ hopes to take House could stumble in Minnesota 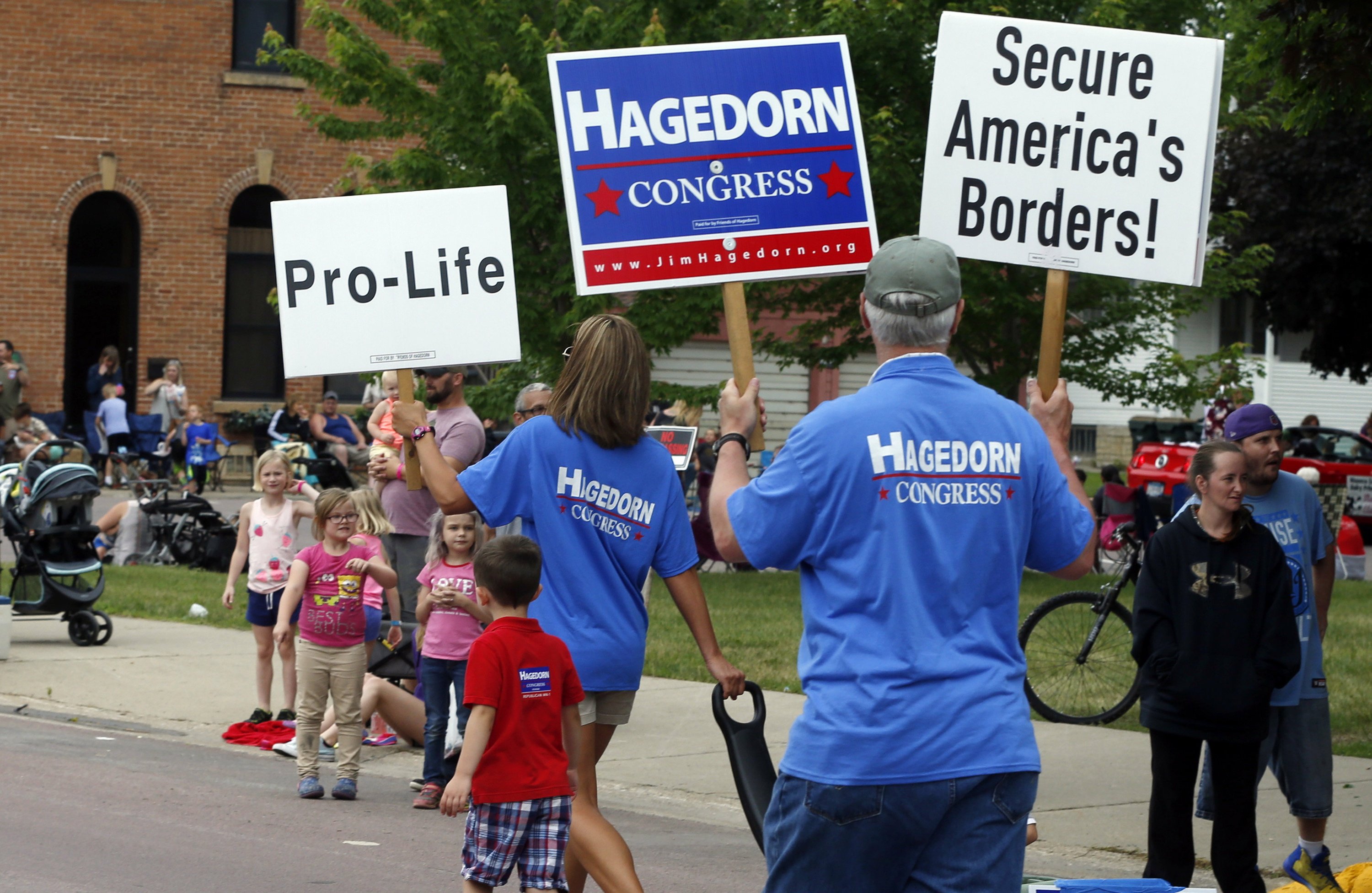 WATERVILLE, Minn. — For all the talk of a blue wave sweeping Democrats back into the House majority this fall, their efforts could be thwarted in one of the nation’s bluest states.

Voters in the sprawling farm country south of Minneapolis and in the economically struggling Iron Range along the Canadian border give Republicans in those two congressional districts perhaps their best chance anywhere for flipping Democratic seats. Democrats need to pick up 23 seats in November to retake the House, but the odds grow long if they lose districts they currently hold.

Democratic incumbents in both Minnesota districts are leaving office, and the races to replace them are widely rated as tossups. President Donald Trump carried both by about 15 points in 2016, even as Hillary Clinton narrowly won Minnesota.

“Minnesota is going to be ground zero for control of the House,” said Corry Bliss, director of the Conservative Leadership Fund, a super PAC aligned with House Speaker Paul Ryan.

“It will go a long way to maintaining Republican control of the House, picking up those two seats,” Israel said. “Both sides know that. And that’s why you’re going to see millions of dollars being spent on all those races.”

The GOP is also eying two seats in Nevada and single seats in Arizona, Florida, New Hampshire and Pennsylvania as possible flips.

Despite Minnesota’s reputation as a liberal stronghold — it hasn’t gone for a Republican president since 1972 — the state has become a major battleground for the parties. Tens of millions of dollars in outside political advertising have flooded the state in recent years as Republicans tried to pick off outstate members of Congress while Democrats focused on the suburbs. The GOP now holds three of the state’s eight House seats.

The two Minnesota seats opened up when Rep. Tim Walz, in the 1st District, decided to run for governor and 74-year-old Rep. Rick Nolan, in the 8th, decided to retire ahead of a difficult re-election fight. Both Democrats just barely hung on in 2016.

Republican Jim Hagedorn, who narrowly lost to Walz in 2016, is hoping to break through in his fourth try in a district that has historically leaned Republican. Congress is a bit of a family affair; his father, Tom, once represented part of the district, and Hagedorn himself spent years as a Treasury Department official in Washington.

Earlier this summer at Waterville’s Bullhead Days — named for a particularly ugly-looking member of the catfish family — Hagedorn worked up a sweat while working spectators along a parade route that wound past a stand selling fried bullhead.

Waterville, a town of around 1,800 people nestled up against Tetonka Lake and Sakatah Lake, counts tourism and agriculture among keys to the economy. It’s a town that went for Trump by 26 points in 2016.

“I want to be a partner with the president,” Hagedorn said.

Howard Mack, owner of Whitewater Creek Grain and Feed, said he and his customers spend a lot of time talking about tariffs and other national political issues, and while they’re nervous about being bargaining chips in a trade war they’re sticking with Trump while keeping their fingers crossed that his hardball strategy works out.

“I give the man a ton of credit for working as hard as he has to get this job,” Mack said.

In northeast Minnesota, Republican Pete Stauber is leaning on a pro-Trump message, too, in hopes of breaking through.

The 8th was once a Democratic bastion thanks to Duluth and the Iron Range, with a large blue-collar workforce drawn to jobs in mining, railroads, shipping and forest products. But declining mining employment and a district boundary that has crept toward the Twin Cities exurbs have turned it into swing territory.

Nolan’s departure left Democrats in disarray, with a five-way primary coming Tuesday and a base bitterly split over new copper-nickel mining ventures that worry environmentalists.

Pro-mining factions helped drive Trump’s big margin there in 2016, and his tariffs on imported steel are playing well in a district where many Democrats also tilt conservative on guns and abortion. Stauber is a county commissioner and retired Duluth police lieutenant who once headed the officers’ union.

“Mining is a big thing” in the district, said St. Louis County GOP Chairman Ron Britton. Too many Democrats are either anti-mining or wishy-washy on the issue, he said.

“We’re very optimistic this year, much more than we have been in past years,” Britton said.

Stauber got boosts from a Trump rally in Duluth in June and a visit by Vice President Mike Pence on Wednesday. He had raised over $960,000 by late July — more than all the Democrats combined. In a show of the national focus on his race, much of the money came from leadership PACs run by Republican members of Congress.

In the 1st District, Hagedorn, the GOP’s endorsed candidate, still must survive a primary challenge from state Sen. Carla Nelson, another pro-Trump, anti-abortion conservative. Democrat Dan Feehan, a veteran of two combat tours in Iraq who became a high-ranking Defense Department official in the Obama administration, awaits the winner.