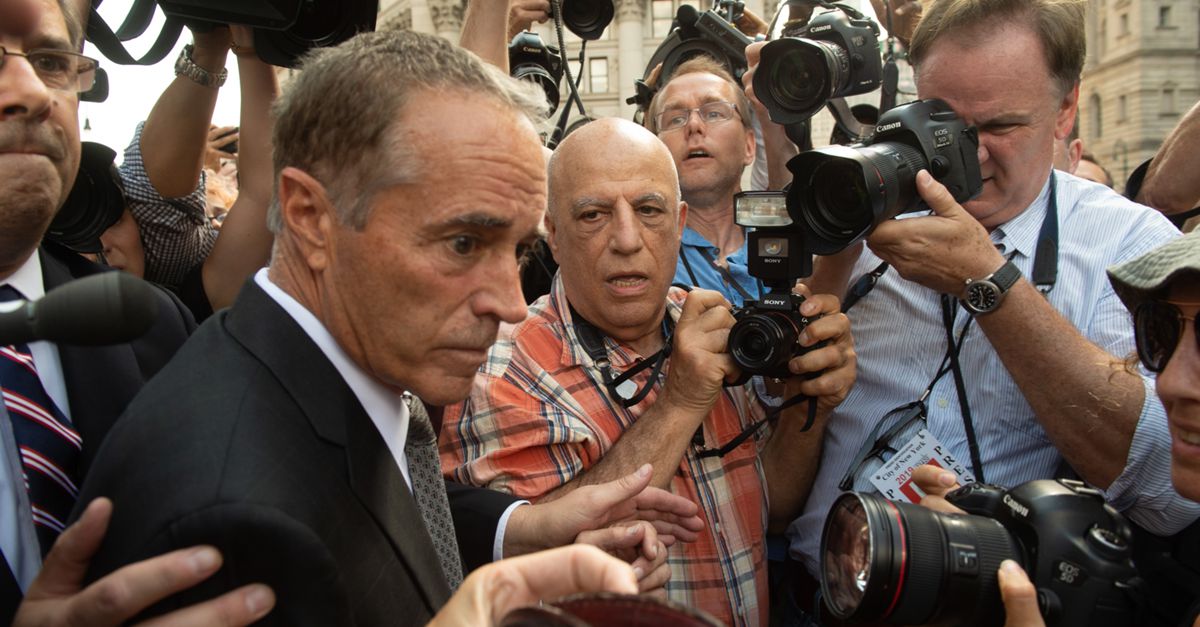 WASHINGTON — Democrats are jumping on a Republican congressman’s insider trading indictment to decry a culture of corruption they say President Donald Trump has fostered, a theme they hope will help them seize congressional control in November’s elections.

“The brazen corruption, cronyism and incompetence of the Trump Administration is reflected in the conduct of House Republicans,” House Minority Leader Nancy Pelosi, D-Calif., said Thursday in a letter to her Democratic colleagues. She called the GOP-run Congress “a cesspool of self-enrichment, secret money and special interests,” and urged Democrats to use their August recess to emphasize that.

Pelosi’s statement came a day after Rep. Chris Collins, R-N.Y., was arrested and indicted on securities fraud charges involving his use of inside information about a troubled biotech company. Collins, a stalwart Trump defender and one of his earliest congressional supporters in the 2016 presidential race, has denied wrongdoing.

Hours earlier, a pair of junior Democrats struck the same note in a conference call with reporters.

“The fish rots from the head,” said Rep. John Sarbanes, D-Md. He said Trump is “the most ethically blind president we’ve ever seen.”

Rep. Cheri Bustos, D-Ill., said Trump, Collins and other Republicans have made the U.S. a country “of the rich, by the powerful and for the lobbyists.”

Collins’ relationship with Trump — and the indictment’s assertion that Collins was on White House grounds when he used insider stock information — proved irresistible to Sarbanes.

The Maryland lawmaker said there was “something poetic” that according to the indictment, Collins was attending the White House Congressional Picnic in June 2017 when he learned the company’s drug trials had failed and called his son — a fellow investor who also faces charges — to warn him about it.

“It’s almost as though he walked into an ethics-free zone when he got to the White House that day,” Sarbanes said.

Democrats want to taint the GOP with an aura of corruption and portray it as championing the wealthy elite as part of a campaign-season effort to offer themselves as the party of the people. Underscoring that contrast, Sarbanes and Bustos said Democrats were promising legislation aimed at protecting voters from Republican efforts to making registering and voting harder and beefing up ethics laws covering campaign contributions and financial disclosure by office holders.

Democrats would retake House control if they gain 23 seats in November, which many analysts see as an achievable goal. Their chances of gaining a Senate majority are viewed as smaller.

Attacking Republicans over ethics won’t be Democrats’ main line of campaign attacks. Trump himself motivates hordes of Democratic voters, as was demonstrated in this week’s still-undecided special election in an Ohio congressional district that has been safely in GOP hands for decades.

In addition, Democrats view protecting people’s health care and defending the right to abortion as appealing arguments in many of the swing suburban districts that will help determine congressional control. Those issues are likely to be brought into sharper focus with the Senate’s upcoming battle over Brett Kavanaugh’s nomination to the Supreme Court.

Democrats will not have a clear field on the issue of ethics.

Sen. Bob Menendez, D-N.J., is facing a harder than expected re-election race this year after the Senate Ethics Committee rebuked him for accepting gifts and using his position to advance the donor’s business interests. A criminal case against him was dismissed last year.