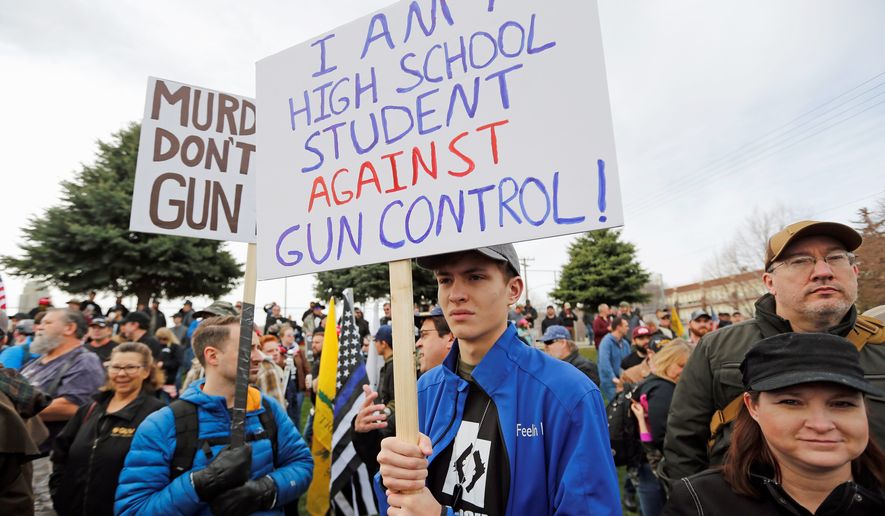 A high school student from Illinois is suing her school for discrimination, claiming she was harassed by school officials when she held a counter-protest in support of gun rights during a school walkout event protesting guns.

The lawsuit was officially filed by Jeremy Oster on behalf of his 16-year-old daughter Madison Oster.

“She was treated horribly for standing up for a position which might be considered unpopular. The school is not supposed to be ostracizing and making you into an object of scorn and ridicule. It should foster divergent viewpoints. High school students don’t need to be shielded from opposing viewpoints or those considered unpopular,” said attorney David G. Sigale, who is representing the plaintiffs and says the lawsuit is being funded by 2nd Amendment Foundation out of Bellevue, Washington.

According to the complaint, Jeremy Oster notified the school district that his daughter wanted to express her pro-gun views in a counter-protest at the same time as an anti-gun walkout event at Hononegah High School on March 14, taking place one month after the Majory Stoneman Douglas High School shooting in Parkland, Florida.

The lawsuit claims that Madison was discriminated against by efforts to segregate her counter-protest from the anti-gun students, alleging that she and five other pro-gun rights student were forced to wait and exit the school separately after their classmates holding the opposing viewpoints had exited.

Furthermore, the lawsuit claims the assistant executive principal, who called Madison and her group “troublemakers,” would not allow them to stand on the football field with the rest of the students, requiring them to stand with their signs on the sidewalk. Madison and her counter-protesters were eventually allowed onto the field but were required to remain separated, out of sight or hearing, from the other students.

“At the end of the walkout, [the executive principal] subjected the pro-gun rights students to taunts of classmates by holding them aside while all of the other students walked past them into the building,” the lawsuit states.

“One student yelled at Madison to kill herself. Another student took pictures of Madison’s group, one of which reportedly became an online meme and method of ridicule among the other HCHS students,” the complaint says. “Finally and ironically, before allowing them to return to class, [the executive principal] warned the small pro-gun-rights group not to bully the students with different views.”

As a result of the bullying, the lawsuit claims, Madison felt she had to leave school early and stay home for a week.

If everything in Madison’s complaint is accurate, her case has merit. Regardless of the content of the protests, it is clear that her school gave only side of the argument the center stage and any attention. Her school failed to consider the free speech rights of students with opposing viewpoints.

Schools across the country allowed students to walkout for March For Our Lives protests wherever they wanted. Not doing the same for the opposite viewpoint is hypocritical and discriminatory by definition.