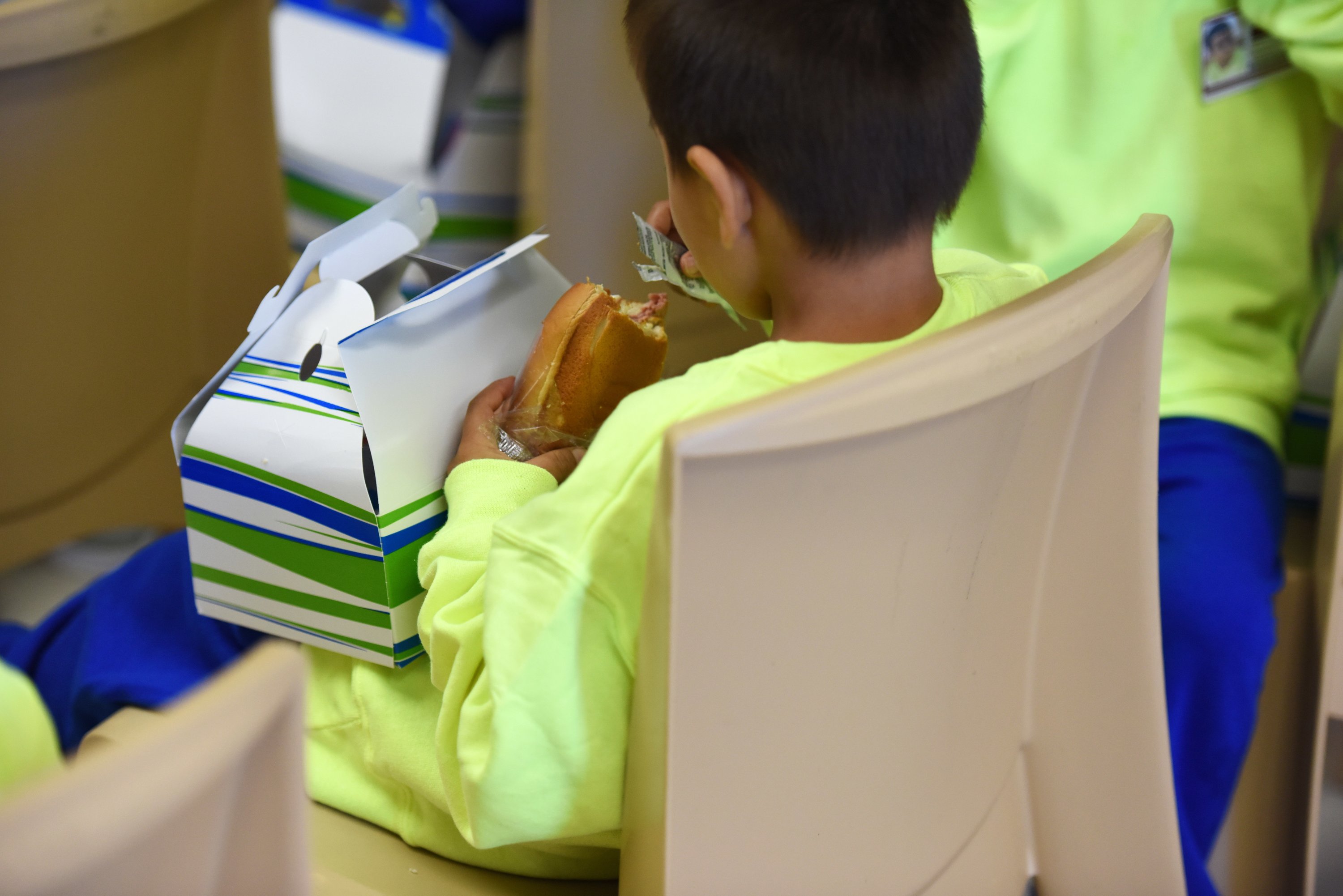 DILLEY, Texas — A little boy with closely cropped hair was sitting quietly and grinning when he suddenly sprang to his feet and tried to swipe a brownie off a nearby tray. He couldn’t quite reach it, though, instead sending crumbs and napkins in all directions and eliciting happy squeals from two children nearby.

It’s a scene that could play out in elementary school cafeterias nationwide as youngsters prepare to head back to class. But inside the Dilley immigration lockup, it’s a glimpse of the epicenter of family immigration detention policies that the Trump administration has sought to tighten.

Federal authorities on Thursday allowed reporters to tour the 50 -plus-acre (more than 200,000-sq.-meter) compound that’s holding 1,520 women and children ages 1 to 17, the nation’s largest such facility, in a remote corner of South Texas, about 70 miles (110 kilometers) southwest of San Antonio. Agency ground rules prevented reporters from interviewing immigrants being held at the facility.

Border arrest figures released Wednesday underscore the strain that families have put on the detention system, which has a maximum capacity of around 3,000. In July, families accounted for 9,258 of the Border Patrol’s 31,303 arrests, or 29.5 percent. In June, they were 27.6 percent of total arrests.

The Trump administration’s “zero tolerance” policy of criminally prosecuting immigrants crossing the border illegally led to families being separated before public outcry prompted a presidential executive order halting the practice in June. About 10 percent of families at Dilley were reunited after being separated, but aren’t showing signs of trauma that would set them apart from other families being held, said Daniel Bible, field office director for U.S. Immigration and Customs Enforcement’s San Antonio sector.

“What I think you’re seeing out here is the typical interaction that these people have all day,” Bible said. “We haven’t noticed that there’s been any change.”

Many families at Dilley are fleeing gang or drug violence in their home countries, which are most frequently Guatemala, Mexico, El Salvador and Honduras. They are seeking U.S. asylum, a process that can take years, and argue that their lives could be in danger if they are deported.

Women and girls ages 10 and older are given pregnancy tests upon arrival and everyone gets physicals, mental health and dental screenings and immunizations within two weeks. Posters featuring a long-nosed Pinocchio proclaim in Spanish: “The No. 1 rumor you’ve heard about vaccinations. It’s not true,” a reference to some beliefs that immunizations can be harmful to children.

Immigrants typically stay at Dilley around 15 days. A federal court decision prohibits the government from holding families in detention for longer than 20 days, though some stay longer by choice while appealing if they fail initial interviews as part of their asylum cases. Michael Sheridan, an ICE contract officer representative who led the tour, said most people at Dilley pass the initial screenings and are eventually released to live with relatives already in other parts of the U.S.

With an annual operating budget of $156 million, Dilley is a series of low-slung compounds on what was once an encampment for oil field workers. Mothers and their children are assigned to different “neighborhoods” named after animals and typically share trailers with bunk beds and communal bathrooms.

The cafeteria offers three meals daily and has a permanent salad bar, rice and beans station, and small ovens that keep warm the flour and corn tortillas that are always available. The most popular meal is chicken nuggets, Sheridan said. There are playgrounds, gyms, a salon trailer offering free haircuts and a library with thousands of books in Spanish and English where detainees can check their email and the internet — but can’t access social media such as Facebook.

In classroom trailers, students are taught Texas curriculum, though they don’t begin the day with the Pledge of Allegiance as in other schools statewide.

Still, advocacy groups note concerns, including that Dilley doesn’t have a pediatrician on staff around-the-clock. The facility has three doctors who are generally present during business hours and other medical staff attend to patients during off-hours, though.

Katy Murdza, advocacy director of the Dilley Pro Bono Project, which works with detained immigrants, said children at the facility who need medicine have to line up, sometimes for hours, at pharmacy trailers that dispense medicine through windows reminiscent of ticket booths. She said the classes have trouble accommodating children who speak languages other than Spanish, like Mayan tongues common in Guatemala.

“I think that all the families who come here are traumatized,” Murdza said. “A lot of people say they wouldn’t have wanted to leave their countries but feel they have no choice.”