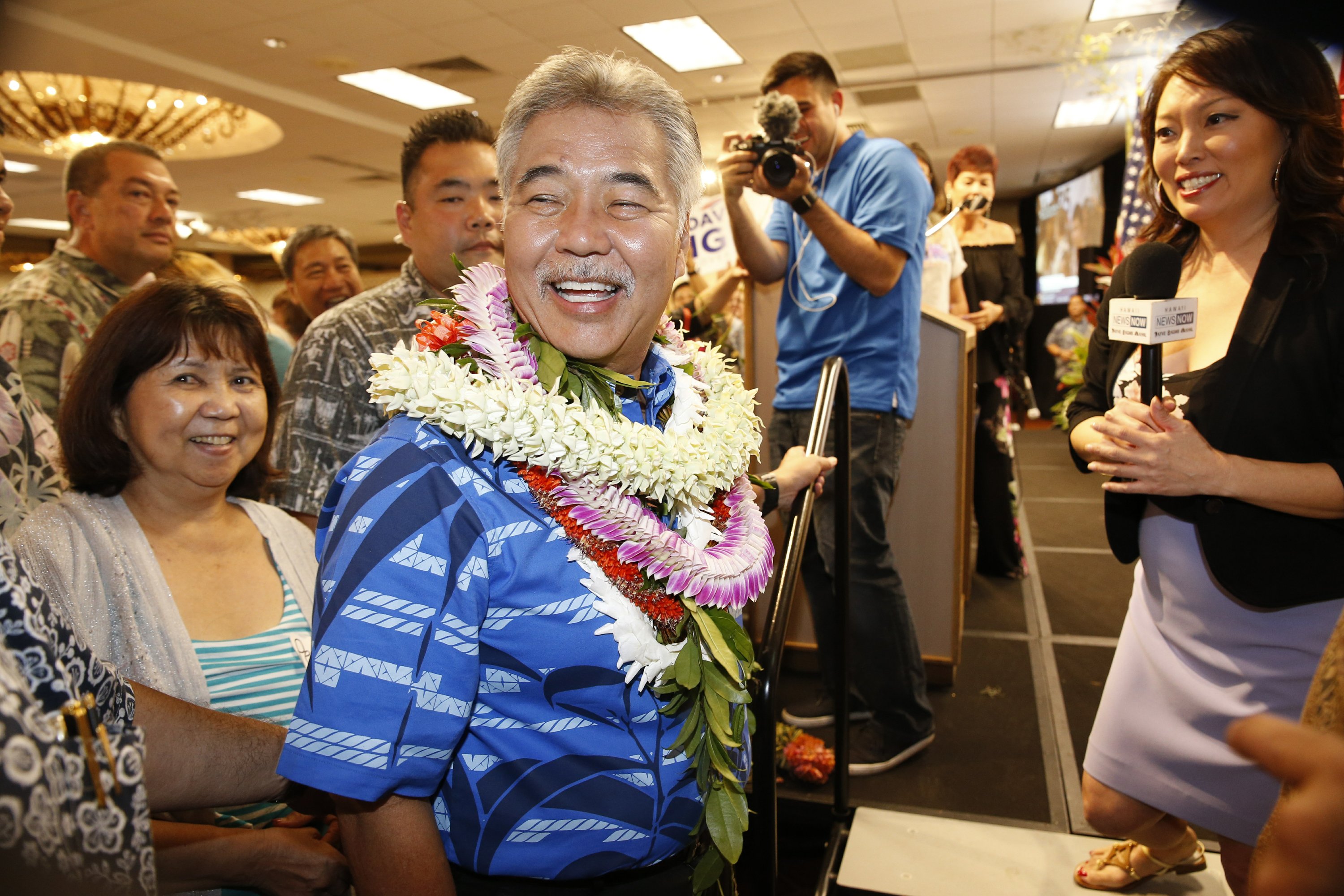 HONOLULU — Despite a challenging first term marked by both natural and man-made disasters, Hawaii Gov. David Ige won the Democratic primary in his bid for a second term in office Saturday, defeating U.S. Rep. Colleen Hanabusa.

Ige’s administration fumbled through a false missile alert that sent the state into a panic in January, a major embarrassment for his administration. But the governor’s handling of Kilauea volcano’s latest eruption, which destroyed more than 700 homes and displaced thousands, as well as devastating flooding on Kauai got him back on track and he came out ahead of Hanabusa.

“The most important thing about the election is the fact that we gave people choices, and the people have spoken,” said Hanabusa during her concession speech. “It was about giving people the choice.”

Hanabusa, who gave up her seat in Congress to challenge Ige, thanked the people that worked on her campaign. “You’ve given me everything,” she said.

“What we will start tomorrow as Democrats is hopefully the healing process,” she said. “I will be there.”

Former Congressman Ed Case emerged from a crowded field to win the Democratic Party primary in the hopes of filling Hanabusa’s spot in Congress.

“I think voters want Washington to work again, that’s the number one issue,” said Case. “I was clearly saying we need to fix Washington and we need to work together, and that message clearly resonated with many voters.”

He’ll face Cam Cavasso, a former state representative who previously ran unsuccessfully for U.S. Senate. Cavasso won the GOP primary. The winner of the Democratic primary is almost guaranteed to win in the general election in Hawaii.

Ige campaigned on his efforts on increasing affordable housing and addressing the state’s homeless problem. Hawaii has had the highest rate of homeless per capita in the nation for many years and is one of the most expensive places to live in the country.

The next governor will also face the aftermath of Kilauea volcano’s latest destructive eruption that began in May. Most of the residents displaced by the lava flows did not have insurance that would cover lava damage.

The volcano is also the most visited tourist site in the state, and the decline in visitors has caused a ripple effect throughout the local economy.

And despite better relations between the United States and North Korea, Hawaii is still a strategic military outpost in the Pacific that could be the target of foreign military threats.

Daryl Chang, a Republican who works in the medical field in Honolulu, voted for Ige, a Democrat, in Saturday’s gubernatorial primary.

“I think he is thoughtful and he does what he thinks is right,” Chang said.

Some in Hawaii have been critical of Ige’s response to the false missile alert, but Chang, 64, said he doesn’t see the governor as being ultimately responsible.

“There’s deficiencies in all the departments.” Chang said of the emergency department that sent the alert. “I didn’t blame Ige for it.”

Chang said he knows the Republican nominee doesn’t have much of a chance in November, which is why he voted on the Democrat side. If he had voted within his party, he would have chosen state House Minority Leader state Rep. Andria Tupola

“I think Tupola is refreshing,” Chang said. “If I were going to vote in the Republican primary I would have voted for her because she’s a new voice and maybe she can bring about change.”

“Once you step into the general, then it’s any man’s game,” Tupola said. “It’s not a party thing, it’s look at the best candidate and make your best vote.”

Tupola said one of her primary focuses as governor would be to address affordable housing and to fight for Native Hawaiians to get the opportunity to use land set aside for them decades ago.

But Ige will likely get the job the general election. Hawaii has had only two Republican governors since it became a state and the vast majority of islands’ residents consistently vote blue.

Jinjer Boots, 26, a Democrat, voted for Hanabusa. As she left her polling place Saturday with her daughter, Cataleia, 3, Boots said she liked that Hanabusa was fighting for women’s rights and that was a major factor for her.

“I like that she fights for women’s rights,” she said. “I do think that she will speak up more for us, with Ige he was very quiet.”