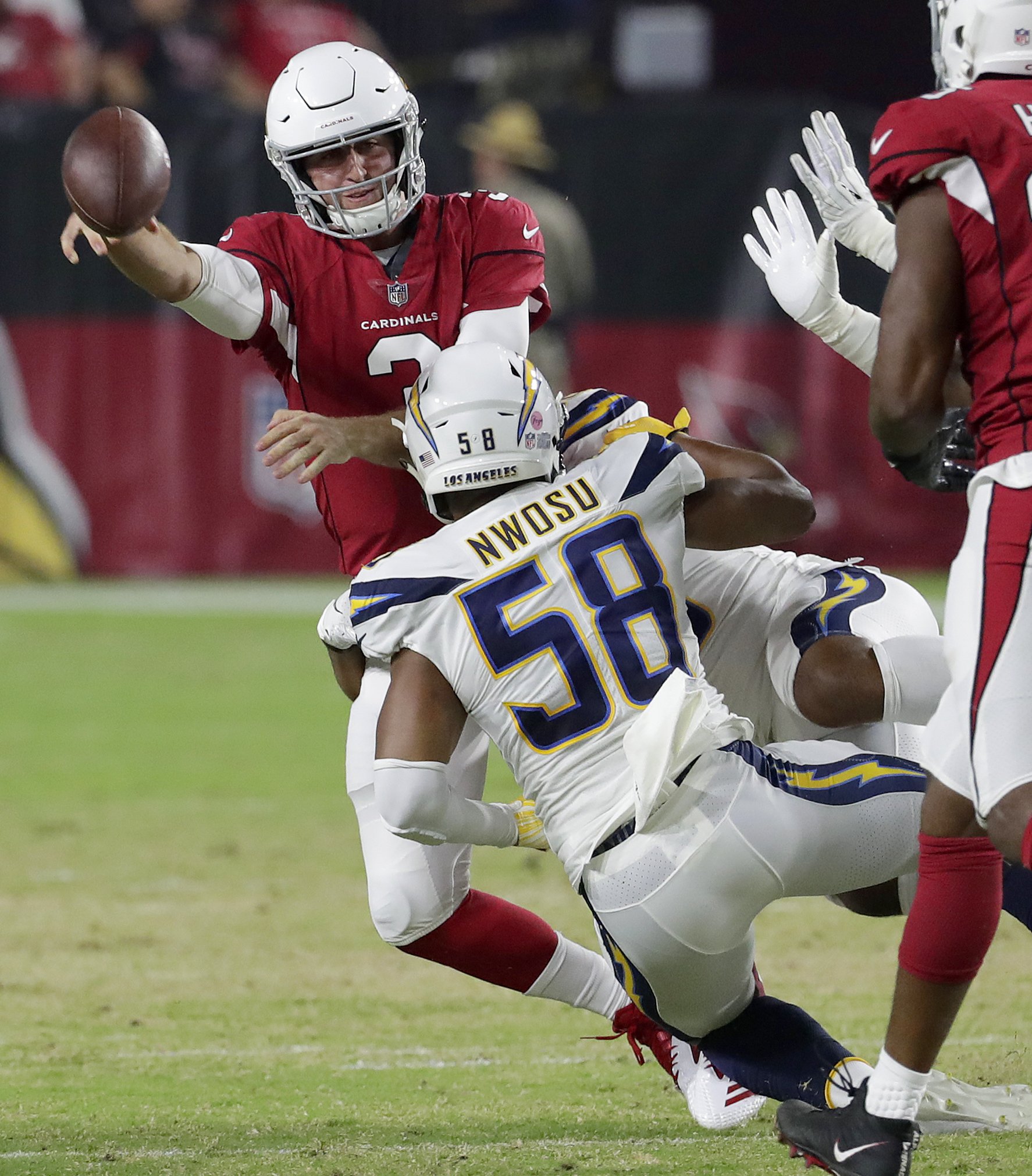 GLENDALE, Ariz. — The first time Christian Kirk returned a punt in college, he took it back for a touchdown. He almost did it again on his first touch in the NFL.

“I was thinking to myself ‘It’s happening again,'” the speedy Arizona rookie said.

He slipped making a move, against the punter (a former college teammate) no less, but the 38-yard return set up a touchdown drive in the first-team offense’s only series of the game, and the Cardinals beat the Los Angeles Chargers 24-17 in their preseason opener on Saturday night.

Rookie Josh Rosen completed 6 of 13 passes for 41 yards in his Arizona debut, playing the whole first half after the opening series.

“There’s a lot of things he’s going to be able to learn and grow from off this first game, watching the tape,” Cardinals first-year coach Steve Wilks said. “We expect him to get better, along with myself and everybody else.”

Geno Smith, battling Cardale Jones for the backup job behind the Chargers’ Philip Rivers, completed 14 of 23 passes for 218 yards, including a 47-yard touchdown throw to Geremy Davis. He was intercepted once.

With Rivers sitting this one out, Jones started and played nearly the entire first half, completing 6 of 12 passes for 50 yards.

“At some point, I want to know what we have in Cardale Jones,” coach Anthony Lynn said. “He came into this league and he’s never really been given a legitimate opportunity, in my opinion. I want to give him that opportunity.”

Kirk, Arizona’s second-round draft pick out of Texas A&M, took the Chargers’ early punt and broke free. He might have taken it all the way had he not slipped trying to make a move against Los Angeles punter Drew Kaser, Kirk’s teammate at Texas A&M.

Kirk probably could have run right past Kaser.

“I gave him the benefit of the doubt, thought he could run a little bit,” Kirk joked.

“He thought I was going to keep running, too. It’s definitely disappointing, obviously, when you think you had an opportunity to get in the end zone, especially on my first touch.”

Arizona’s David Johnson reeled off a pair of 14-yard runs on the first two plays, his only carries of the night, and rookie Chase Edmonds scored on fourth-and-goal from the 2-yard line. Edmonds was hit behind the line of scrimmage but used a second effort to barely stretch the ball over the goal line.

Sam Bradford, making his debut as Arizona’s starting quarterback, directed the scoring drive in his Cardinals debut but mostly handed the ball off. He completed his only pass for 6 yards.

Arizona’s second touchdown came in the third quarter when Jeremy Cash returned a fumble 12 yards for a score. Later in the quarter, Cash was carted off the field with a knee injury.

Charles Kanoff, an undrafted rookie out of Princeton, threw a 14-yard TD pass to Bryce Williams for the go-ahead score with 10:06 to play. The game ended when Chargers QB Nic Shimonek was tackled at the Arizona 2-yard line.

Arizona was 0 for 11 on third-down conversions.

Rosen didn’t get much help from his offensive line or his receivers, having to dodge the rush to get a pass off. He had two passes dropped.

Daniel Munyer, the backup center now that rookie Mason Cole is a starter, had trouble with shotgun formation snaps, repeatedly rolling the ball to the quarterback. Cole took over when A.Q. Shipley went down with a torn ACL in training camp.

“I think I did some good things and some bad things,” Rosen said.

Okung stood behind the rest of the players, who had lined up on the sideline. He was the only player on either side to protest visibly.

Okung is a member of the executive committee of the NFL players’ union.

Los Angeles turned the ball over four times, three times on fumbles and once on an interception.

The Chargers also were penalized 15 times for 155 yards. Arizona had one turnover and 11 penalties for 110 yards.

“You could tell it was definitely preseason week one,” Lynn said. “It was too sloppy.”

Chargers: are home against the Seattle Seahawks next Saturday night.