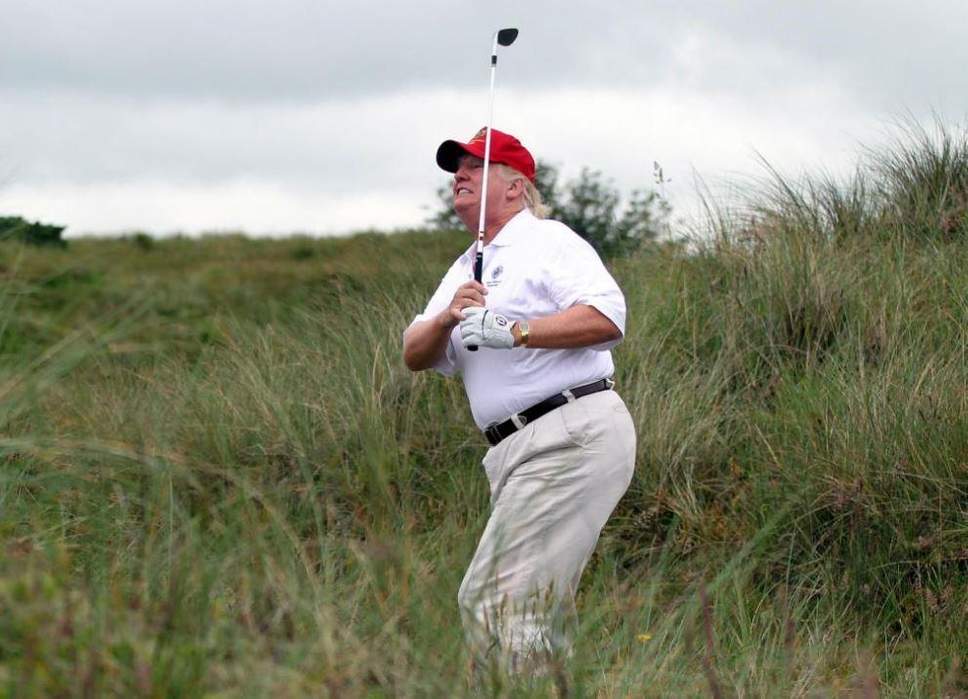 Trump, who is loath to admit to sleeping — let alone taking time off — has spent his week away mixing downtime and golf rounds with meetings and dinners, intent on projecting the image that he’s been hard at work.

Ensconced at his private club, he’s surrounded by a clutch of unofficial Bedminster advisers, who have unusual levels of access to a president with the propensity for mixing business with leisure.

Not that it was his idea to leave Washington anyway, he contends.

“We’re renovating the White House, a long-term project and they approved it years ago. And I said, ‘Well, I guess this would be a good place to be in the meantime,'” Trump told reporters invited to the property to document a roundtable discussion on prison reform efforts Thursday.

“I miss it. I would like to be there,” he said of the White House, “but this is a good way of doing it.”

No staffers had publicly mentioned the need for any rehabilitation work before Trump’s departure, and the explanation effort underscores the president’s concern about public perceptions as he approaches having spent 150 days of his presidency at his golf properties.

Trump repeatedly blistered Barack Obama during the 2016 campaign for golfing, telling cheering supporters that as president he’d be far too busy working for them.

“I’m not gonna have time to go play golf,” he would shout.

Does he actually play golf at Bedminster or at his better-known Mar-a-Lago estate in Florida? Yes, but it’s hard to say how much. The White House won’t say, and reporters are barred from getting close enough to see.

All presidents take vacations. Obama and his family spent time on Martha’s Vineyard and in Hawaii. But Trump seems more sensitive about admitting it.

“Had a very good phone call with @EmmanuelMacron, President of France,” he tweeted Friday, describing it as just one of “many other calls and conversations,” including a dinner with Apple’s Tim Cook.

He has been photographed golfing by social-media-savvy members. But he’s spent most of this past week out of outsiders’ sight. He’s hosted several donor events, including a dinner for “Protect the House,” a fundraising committee led by Vice President Mike Pence and House Majority Leader Kevin McCarthy that raises money for Republican House candidates.

On Tuesday evening, he welcomed more than a dozen CEOs, their spouses and staffers for an animated dinner that included frank discussions of trade, immigration and other issues.

White House aides have always been leery of Trump’s visits to Bedminster where, as at Mar-a-Lago, he can mingle with members without staff “handlers” surrounding him. Also, there are fewer staff to try to keep him upbeat and, with some luck, away from the television.

The New Jersey golf club is where a brooding Trump unleashed several of his most inflammatory attacks and where, in spring 2017, he made the final decision to fire FBI Director James Comey, the move that triggered the special counsel’s probe into Russian election meddling. During last summer’s Bedminster break, he debuted his threat to unleash “fire and fury” against North Korea and then made his first tepid response to the racial violence in Charlottesville, Virginia.

This year, Trump’s tweets have included scientifically dubious theories about the raging California wildfires and an insult to NBA superstar LeBron James that to some read as a racial dog whistle. In another early morning blast, he acknowledged that the 2016 Trump Tower meeting at the center of the Russia investigation was indeed arranged “to get information on an opponent.”

John Catsimatidis, a billionaire businessman and radio host who owns a New York City supermarket chain and attended the CEO dinner, described Trump as in a “great mood” as he promoted the economy and fielded questions, including several on immigration. The president told those in attendance that he was considering signing an executive order to make it easier for top-performing foreign students to stay in the U.S. as well as for companies to hire the foreign workers they need.

That’s the kind of off-the-cuff promise-making that White House aides are on high alert for.

The golf club remains open and active when Trump is on the scene, giving the president a chance to mix with members and, as he delights in doing, dropping in on weddings and parties. It’s where his daughter Ivanka married Jared Kushner, and where Trump, pre-presidency, had planned to be buried.

But the casual atmosphere also allows members to buttonhole the president to push him on pet issues.

While the Mar-a-Lago crowd has a reputation among White House staffers for being dominated by aging socialites with few real-world concerns, Bedminster regulars tend to be lower-key members of the tristate-area elite whom Trump likes and respects and to whom he may be more amendable to listening.

The atmosphere is also much more casual than Mar-a-Lago, where high-society Palm Beach members reserve tables and dress to the nines hoping to see or be seen. There, Trump is constantly approached for photos or to broach odd ideas about world peace or pet issues.

In Bedminster, the members are more reserved, but when they do come up to Trump with ideas, they are usually more serious and Trump is more likely to direct staff to follow up, White House aides say.

Members and White House aides say Trump appears to be more comfortable at Bedminster, which, according to one member who enjoys reciprocal privileges, has a “totally different” vibe.

Trump does meet with staff and has been speaking by phone with Pence, his secretary of state, his national security adviser and congressional leaders.

But he’s rarely seen in a suit jacket and tie and has proved to be more unchecked at the property, which is dotted with trees, ponds and green lawns.

“It’s beautiful,” Catsimatidis said the day after his first visit. “The beauty was far beyond what I imagined.”