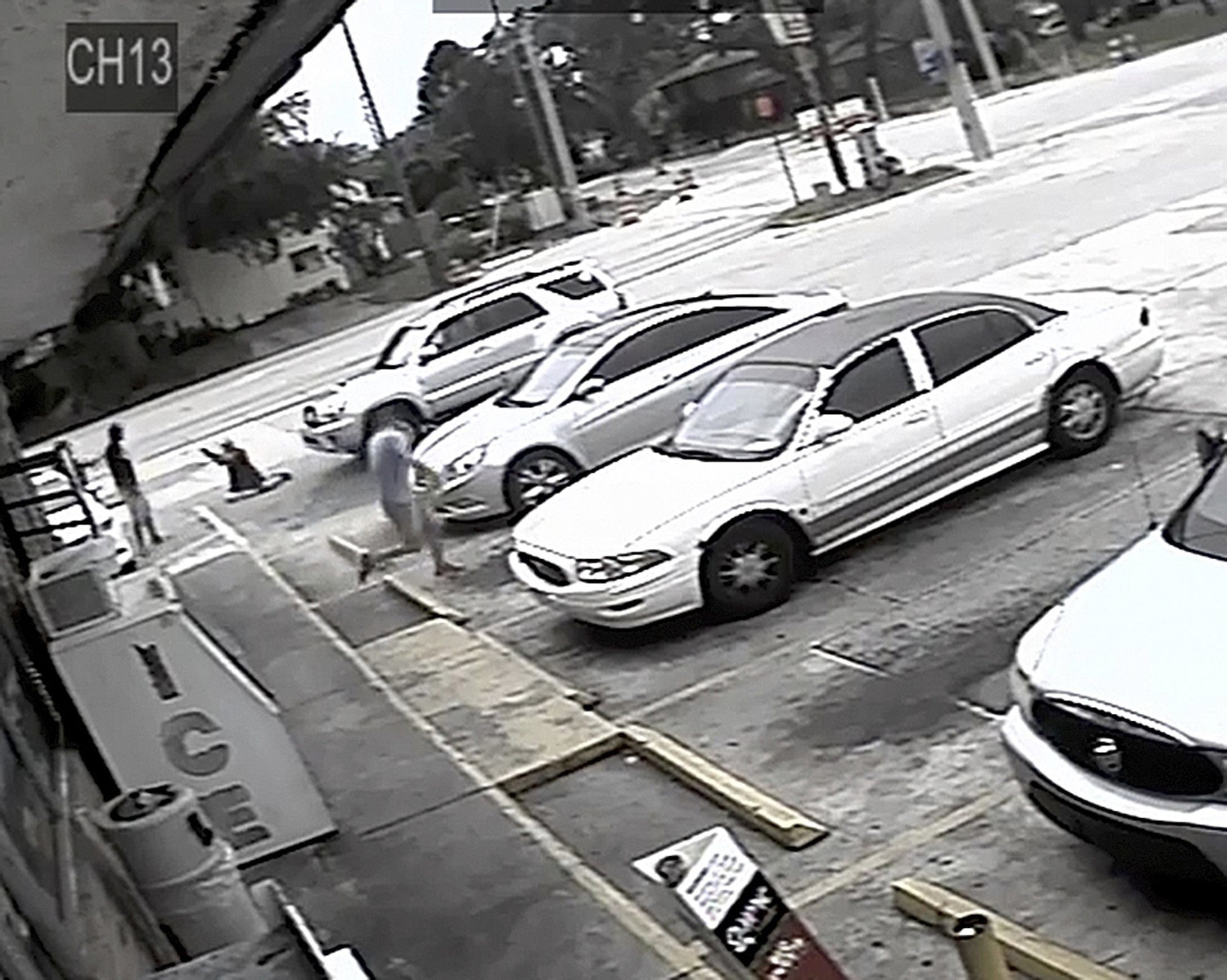 FORT LAUDERDALE, Fla. — Prosecutors charged a white man with manslaughter Monday in the death of an unarmed black man whose video-recorded shooting in a store parking lot has revived debate over Florida’s “stand your ground” law.

Michael Drejka, 47, has been charged with the July 19 death of Markeis McGlockton outside a Clearwater convenience store, Pinellas County State Attorney Bernie McCabe said. Drejka was being held at the county jail on $100,000 bail. It is unknown if he has an attorney.

McGlockton’s girlfriend, Britany Jacobs, who was seated in the couple’s car with two of their children, ages 3 years and 4 months, said Drejka confronted her for being parked in a handicapped-accessible space. McGlockton, 28, had gone into the store with their 5-year-old son. Jacobs said Drejka cursed at her. Video shows McGlockton exited the store and shoved Drejka to the ground. Seconds later, Drejka pulled a handgun and shot McGlockton as he backed away.

In court documents, McCabe and Pinellas sheriff’s Detective George Moffett cited three other drivers who said Drejka threatened them during confrontations that preceded his run-in with McGlockton. Two of them said he displayed a gun.

A black man who drives a septic truck told Moffett he parked in the same handicapped-accessible spot three months before the shooting, the documents show. The man said Drejka began yelling at him and said he would shoot him. The driver said he left, but as he pulled away Drejka shouted racial slurs. The man’s boss told Moffett that Drejka later called, telling him “that he was lucky he didn’t blow his employee’s head off.”

In separate 2012 cases, drivers reported that Drejka waved a gun at them during road rage confrontations. In both cases, officers stopped Drejka and found a gun in his car, but he denied showing it to the other drivers. In one case, the teenage driver didn’t want to press charges. In the other, the driver left before the officer could get her information.

McGlockton family attorney Benjamin Crump — who gained national prominence representing the family of Trayvon Martin after the black teen’s fatal shooting by a Hispanic man in 2012 — said in a statement Monday “it’s about time” Drejka was arrested.

The family, civil rights groups and others had been holding protests demanding he be charged, saying if Drejka had been black and McGlockton white, deputies would have arrested Drejka immediately or shot him.

“This self-appointed wannabe cop attempted to hide behind ‘Stand Your Ground’ to defend his indefensible actions, but the truth has finally cut through the noise,” Crump said. “I have full faith that this truth will prevail to punish this cold-blooded killer who angrily created the altercation that led to Markeis’ needless death.”

Pinellas County Sheriff Bob Gualtieri originally declined to charge Drejka, saying one day after the shooting that the man was protected by Florida’s stand-your-ground law. The sheriff passed the case to prosecutors for a final decision. The law says people can use deadly force if they believe they are in imminent danger of death or great bodily harm and have no obligation to retreat. Under a change made by the Legislature last year, if a suspect raises a stand-your-ground defense, prosecutors must prove the law doesn’t apply.

Gualtieri said in a statement Monday that he supported McCabe’s decision.

Store security video shows the confrontation began about a minute after Jacobs pulled into the handicapped-accessible spot. Jacobs told Moffett that McGlockton had picked her up from her job as a nursing assistant and that two trucks blocked her from getting to other spaces. McGlockton and his oldest son got out and entered the store.

Drejka pulled up in his SUV seconds later, parking perpendicular to Jacobs. Drejka got out, walked to the back of Jacobs’ car, looked at the license plate, and then went to the front, apparently looking for a handicapped sticker there. Jacobs told Moffett that Drejka began yelling at her. The video shows him pointing to two empty spaces nearby.

The video then shows him walking to Jacobs’ window. A man entering the store about 15 feet (5 meters) away stops to look. He later told Moffett he thought about intervening on Jacobs’ behalf.

McGlockton then exits the store, walks toward Drejka and — just as Jacobs gets out of the car — shoves Drejka with both hands. Drejka lands on his back and McGlockton takes a step toward him. Drejka sits up, pulls his gun and points it at McGlockton, who takes three steps back until he is about 12 feet away (3.6 meters). Drejka fires, hitting McGlockton, who runs back into the store clutching his chest. Witnesses said he collapsed in front of his son, waiting inside.

Crump also represented the family of Martin, a 17-year-old black youth who was fatally shot by George Zimmerman, a Hispanic man who was his Orlando-area neighborhood’s watch captain. Zimmerman had confronted Martin, who was walking back to the home of his father’s fiancee after making a purchase at a convenience store.

Zimmerman said he thought Martin might be a burglar casing homes. They fought and Zimmerman fatally shot him. There were no eyewitnesses or videos. Zimmerman said he feared Martin, who was unarmed, was about to kill him and a jury acquitted him of second-degree murder.