Glacier latest US park to be scorched by Western wildfires 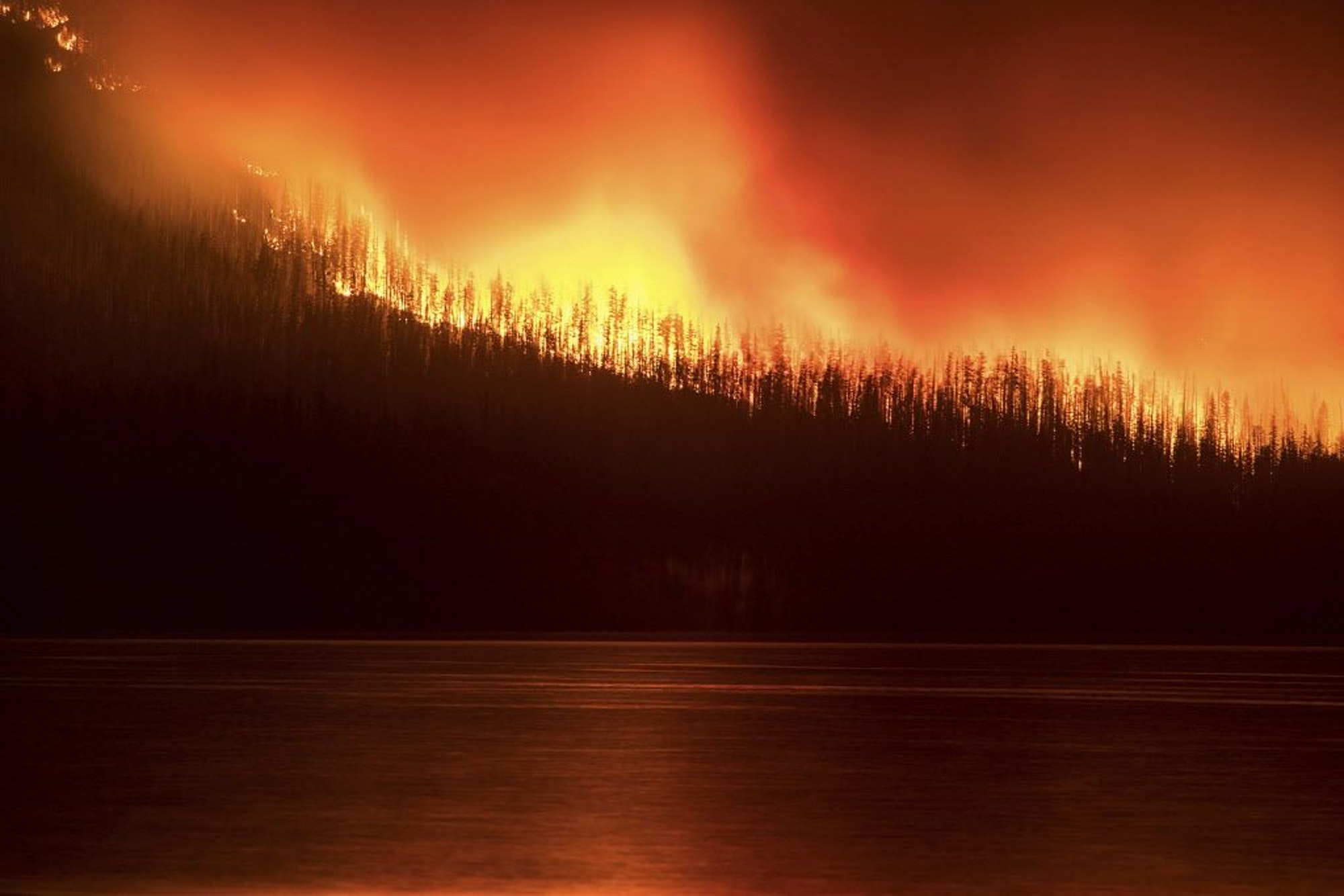 A wildfire destroyed structures and forced evacuations Monday from the busiest area of Montana’s Glacier National Park, as officials in California prepared to reopen Yosemite National Park following a two-week closure at the height of the summer season.

Glacier’s Sprague Creek campground was closed and evacuated, a day after a fast-moving fire triggered the evacuation of dozens of guests from the historic Lake McDonald Lodge late Sunday night.

Park officials said in a statement that structures on the north end of Lake McDonald were lost, but they did not provide details on the number and type. The fire grew to between 2 and 4 square miles (between 5 and 10 square kilometers) by Monday afternoon.

“It just completely exploded. Yesterday we were watching it grow all day, and now it’s so smoky you can’t see anything,” said Kyersten Siebenaler with Glacier Outfitters, which rents boats in Apgar, a small community at the south end of the lake.

The outfitting company was trying to help tourists who evacuated find places to stay on the east side of the park, where it was not as smoky, Siebenaler said.

A second campground, a motel and private residences inside the park’s boundary also were evacuated. A 30-mile (48-kilometer) stretch of the scenic Going-to-the-Sun Road was closed to traffic. The road, with breathtaking views of the park’s mountainous interior, is a major draw for tourists.

Triple-digit temperatures across parts of the state — paired with lightning from passing thunderstorms — set the stage for several new large fires to take hold in Montana in recent days.

Among them was a 3-square-mile (8-square-kilometer) fire that triggered an evacuation order for residents of 15 houses southwest of the town of Ennis, Montana. The fire was burning in challenging mountain terrain with a mix of pine, fir and spruce trees, said fire information spokesman Dave Sabo.

In Colorado, a wildfire in the southwestern portion of the state ignited by lightning July 29 had burned across 34 square miles (88 square kilometers) by Monday.

Wildfires flare up regularly at many of the large national parks that dot the U.S. West, often burning in densely-forested, backcountry areas where their effects are limited. This year’s blazes threaten to have a magnified impact coming at the height of the summer tourist season.

More than 400,000 visitors last month passed through the west entrance of Glacier, near McDonald Lake. That was almost half the park’s total. August is typically just as busy, and a protracted shutdown of part of the park could hurt the tourist-driven local economy.

“We’re hoping this is short-lived,” said Danny McIntosh, marketing manager for Glacier Park Collection by Pursuit, which operates Motel Lake McDonald. McIntosh said all of the guests in the motel’s 28 rooms were relocated to other accommodations run by the company.

Yosemite was scheduled to reopen Tuesday after being largely closed since July 25 because of smoke from fires in remote areas that choked the scenic Yosemite Valley.

The closure caused upheaval for thousands of tourists whose summer trips were cancelled. Visitors were warned to expect limited hours and services as the park returns to normal.

The fire burning in Glacier was one of several started in the park by lightning on Saturday evening. Windy, dry conditions on Sunday caused the blaze to spread rapidly, in full view of tourists and people who live and work around Lake McDonald, a 9-mile (14-kilometer) body of water ringed by steep-sided mountains.

Two planes from Canada were brought in to help battle the blaze, but officials said high winds prevented their pilots from flying close enough to the fire to be effective.

The lake was partially closed to boaters while the planes were scooping up water to drop on the fire, Siebenaler said.

Crews were expected to stay on scene through the night to protect houses and other structures from the flames.

It’s the second year in a row that wildfires prompted evacuations around Lake McDonald. A blaze in the area last year destroyed the Sperry Chalet, an iconic backcountry lodge built in 1914. Work recently started on rebuilding the chalet. It was not immediately known if construction had to be halted due to the fires.

Taylor Creasey of Whitefish said she and a friend drove up to the lodge Sunday afternoon after they heard about the fire, the Missoulian newspaper reported. She posted a video on Facebook of huge plumes of smoke hanging over burning ridges around the lake.

“We didn’t expect to see anything that crazy,” Creasey said Monday. “It was so cold there, but at the same time really hot — you could feel the heat radiating across the lake. It was windy and cold and hot all at the same time.”