The Latest: Vehicles involved in highway collapse in Italy 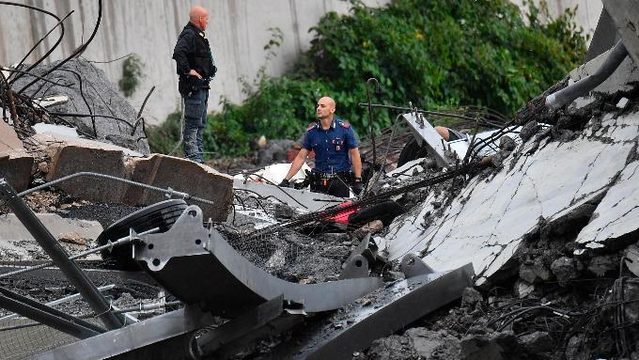 MILAN — The Latest the collapse of a raised highway in Italy (all times local):

Italian authorities say that about 10 vehicles were involved when a raised highway collapsed during a sudden and violent storm in the northern port city of Genoa.

Private broadcaster Sky TG24 said that a 200-meter section of the Morandi Bridge collapsed Tuesday over an industrial zone, and firefighters told The Associated Press that there are concerns about gas lines.

Police on Twitter said the collapse occurred during a sudden violent storm, while firefighters said vehicles were involved, indicating the likelihood of fatalities.

Photos published by the ANSA news agency on its website showed a huge gulf between two sections of the highway.

Video captured the sound of a man screaming: “Oh god, oh, god.” Other images showed a green truck that had stopped on the bridge just meters (yards) short of the gaping hole in the bridge.

The Italian news agency ANSA says a raised highway has partially collapsed in the northern port city of Genoa.

There was no immediate word on deaths or injuries. ANSA said that authorities suspected that a structural weakness caused the collapse on Tuesday.

Images circulating on Italian media show the highway through the city with a large section missing. Emergency vehicles were responding.